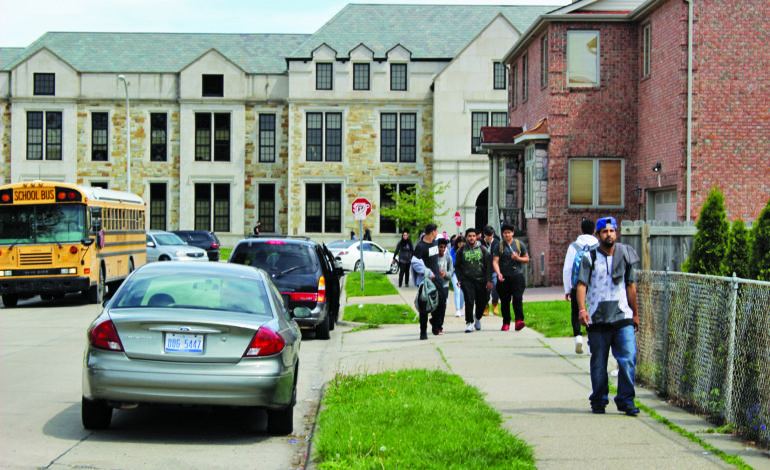 DEARBORN — Since the end of last month, the Dearborn Board of Education has been holding community forums that educate and solicit community feedback on three boundary line change proposals— the possible solution to overcrowding in the district’s high schools.

The forums, which are open to all community members, started on Oct. 24 and will end on Nov. 30. The schedule can be found at the Dearborn school district site.

Communications Director David Mustonen and retired administrator Hassane Jaafar run the meetings. While no one plan has been set in stone, there is progress.

During Monday’s board meeting, Mustonen began his update on the forums by sharing a new blog on the site called The Boundary Blog. It provides information and presentations on the proposals in both English and Arabic, maps and even a feedback forum for those who can’t attend the meetings.

Mustonen said the Dearborn Heights campus has been a trending topic in the five meetings held so far.

“The Michael Berry Career Center is one of several programs at the Heights campus,” he said. “We have the Montessori program, we have the STEM programs, we have community ed and special ed and we have DCMST.”

He said since the Berry center and DCMST (Dearborn Center for Mathematics, Science & Technology) are home to half day programs, the community must take them into consideration when reviewing the proposals and data because approximately 700 students are enrolled.

He said that’s the case without even taking into account dual enrollment, co-op programs and the collegiate academy program, which create even more space in the high schools. Mustonen said the center is obviously not a solution on its own.

“Because you can see that even with the Berry Center, some of these numbers are still over capacity,” he said. “So, it’s not a solution by itself, but it is one way that the principals are using to manage [overcrowding].”

The second topic the community brought up is the construction of a fourth high school.

Mustonen said some points that should be considered are the cost, which can range from $70 to $100 million and would require a voter-approved bond proposal because the school board doesn’t have that amount of money.

He added that an additional high school would impact the boundary lines and it would most likely launch in fall 2023 if the board were to vote for it.

“The average operational cost for high schools is anywhere from $2 to 3 million,” he said. “I’m not making a case for or against, but I’m sharing the facts that we would need to consider in this discussion.”

There have also been some talks about building a ninth grade academy. Mustonen said any building that one might think is ready to move into will need renovation to raise it to the Dearborn Public Schools’ standards. Also, health codes, safety requirements and technology are other factors that need to be considered.

According to Mustonen, out of the three boundary change proposals presented at the meeting, the community seemed to favor the second because it keeps the O.L. Smith Middle School students at Edsel Ford.

He said some suggested that Salina students should move to Fordson and all of Stout to Edsel Ford.

“That’s possibly something that may come up as we move to Salina to give this presentation,” he said.

Mustonen said the community feedback will help the board finally decide on the solution, so community members unable to attend the last few meetings should share their thoughts on The Boundary Blog.

School Board President Mary Lane said the community forums she’s attended so far have been respectful and the feedback has impressed her.

“A couple of comments made me think about future direction,” she said. “Almost everybody is pretty happy with where they are. The less disruption possible, that’s better for everybody. We do have to make some changes, but students who move will be well-received at the new school they go to and should be celebrated, not bullied.”

Lane said she’s inclining toward the second proposal, but with some alterations here and there. She emphasized that the board has not yet decided and is still taking into consideration points made at the forums.

Trustee Fadwa Hammoud also assured community members that she’s been looking over the proposals because of their comments and that the board is not taking their feedback lightly.

The next community forum is on Monday, Nov. 20 at Salina Intermediate School at 6:30 p.m.