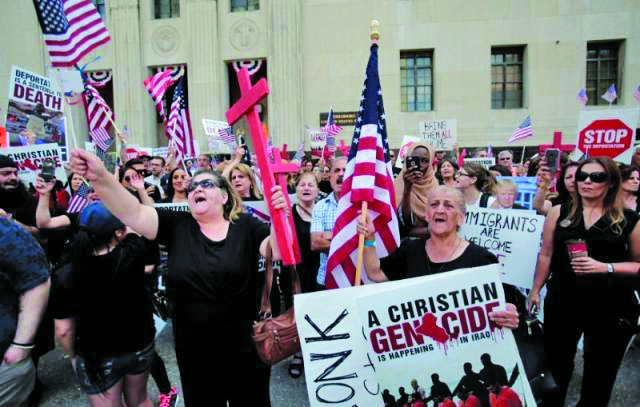 Protesters rally outside the federal court just before a hearing to consider a class-action lawsuit filed on behalf of Iraqi nationals facing deportation, in Detroit, June 21 - Photo by Reuters

DETROIT — On December 20, U.S. District Court Judge Mark Goldsmith will entertain a motion asking for the immediate release of more than 100 Iraqi nationals. Code Legal Aid and ACLU asked for their immediate release.

“These people have businesses, homes and families; they are great contributors to our community,” said Nadine Yousif Kalasho, a member of the legal team trying to restore the freedom of the detainees. “It is Christmas season and a New Year is coming. It’s time for these men and women to be reunited with their families.”

The detainees have been held in various prisons across the country since June 11. The detained individuals are among 150,000 Chaldeans in the Metro Detroit area.

Some of the detainees are in poor health, according to a press release put out by the law firm of Mort Meisner Associates. A number of detainees are the main source of income for their families and since their imprisonment, the families have had problems financially as well as emotionally.

The detainees have already missed Independence Day and Thanksgiving and may, depending on the outcome of the hearing, also miss Christmas.