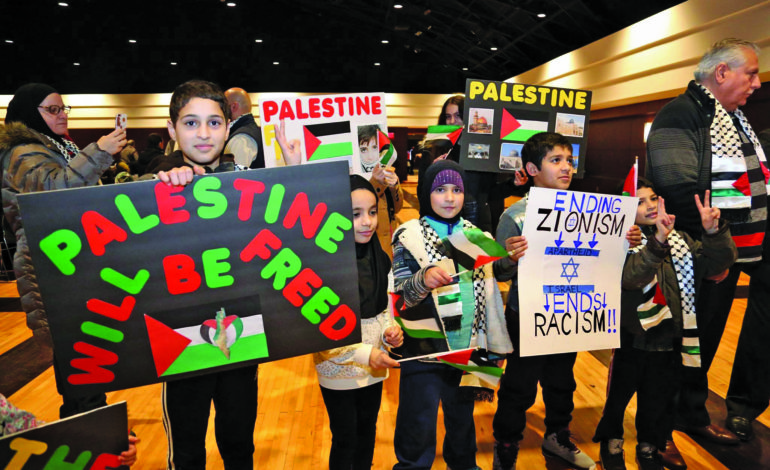 DEARBORN — This week, world leaders at the United Nations General Assembly and Security Council voted to condemn President Trump for his decision to designate Jerusalem as Israel’s capital.

On the grand stage, they reflected their respective countries’ shared sentiments of solidarity with the Palestinian people and criticized Trump for fanning the seven-decade old flame of unrest in the Middle East.

Trump and Nikki Haley, the United States’ ambassador to the U.N., said they were closely monitoring which country voted for a resolution at Thursday’s General Assembly.

Two days earlier, in Dearborn, a scaled-down conglomerate from nations around the globe — particularly from the Arab World— gathered to do the same. With Palestinian flags raised high, loud speakers, traditional Palestinian and Arab resistance music, Arab, Muslim, Christian, Black and White and other Americans packed a massive hall to make it known that their nation’s leader has failed them in considering their interests and that his misguided decision would exacerbate instability in their homelands – the reason why many of them sought refuge in the U.S.

They rallied so that Trump’s administration would take note.

“Let’s give him things to be hyper sensitive about,” said Khalid Turaani, a Palestinian American activist and co-host of rally.

On the podium at the Ford Community & Performing Art Center, Mayor Jack O’Reilly said he stood with the Palestinian community and has the “same goals” regarding the issue of human rights violations in the occupied land.

He called out Trump for his lack of leadership.

“We have someone who’s now in place who doesn’t understand,” he said. “You look at what’s been done, you carefully examine the consequence of everything you do and you make sure you really can say in your own mind with the best information available that this is the right course – our president failed to take that into consideration.”

O’Reilly called for individuals to run for office so that leaders who “understand the obligation of being an elected official” could work to overturn the decision. He also called for getting “everybody at the table.”

“In this case, nobody was consulted…it just happened,” he said.

He, too, strongly called out Trump for his decision.

“You never took any consideration of the interests of our country,” Mardini said. “You did not collaborate or cooperate with the international community.”

Osama Siblani, publisher of The Arab American News and co-host of the rally that packed more than 700 participants inside Hubbard ballroom at the Ford Community & Performing Arts Center, presented pictures of individuals who dedicated their lives to defend Palestinian rights to freedom and self-determination including the late Marcia Federbush, who died last Friday. She’d spent her adult life standing up for the Palestinian cause. Federbush was an American icon who represented the true spirit of America, unlike Donald Trump, Siblani said.

He also recalled another American young woman who lost her life defending people in Gaza against Israeli aggression in March of 2003. Rachel Corrie, a member of a pro-Palestinian group called the International Solidarity Movement (ISM), was killed while trying to block an Israeli armored bulldozer from demolishing a Palestinian home.

“Early this morning the Israeli army arrested a Palestinian teen Ahed Tamimi, 16, who dared to stand up and smack two Israeli soldiers who broke her younger brother’s arm while they were arresting him,” Siblani said. “Her bravery and heroism is the path to freedom and dignity and not those who met the other day in Istanbul.” He referred to the recent summit of Arab and Muslim world leaders.

Siblani asked the crowd to stand up in recognition of those who lost their lives in the struggle, including Ibrahim Abu Thurayeh, who lost both of his legs from the hip and whose home was demolished during an Israeli raid in 2008. He kept standing up against Israeli aggressions until he was shot and killed by them last week while protesting Trump’s decision on Jerusalem.

“These people and their like are the real hope for a free Palestine with Jerusalem as its capital,” Siblani said.

Dawud Walid, executive director of Council on American-Islamic Relations in Michigan (CAIR-MI), said that Trump’s “brash and ignorant” decision “is nothing but a symptom of a bigger disease.”

He said the U.S. has passively supported the Israeli occupation for decades and that if the Arab and Muslim American community— including Michigan’s Muslim population of 300,000 and America’s 6 million Muslims— spoke up as loudly as pro-Israeli lobbyists do on Capitol Hill, they could indefinitely change the White House’s course on foreign policy.

“When we are passive and just pray, don’t expect anything more,” he added. “Faith is in speech, but also in the deed.”

Imam Elahi, spiritual leader at the Islamic House of Wisdom, said the Trump administration did not create the Israeli-Palestinian crisis, but continues to be a part of it.

He urged the community to not heed deceptive arbitrators.

“The solution is not to count on the corrupt kings and the founders of al-Qaeda and ISIS,” he said of the allied United States and Saudi Arabia. “The solution is not a union between the Israelis and Saudis. Of course they’re around the same business, those who are stealing the Palestinian land to establish illegal settlements and those who are stealing the money of the Umma and paying $300 million for one house…and $450 million for one painting – these are all thieves.”

The AANews journalist Ali Mansour said the cause for Palestine’s liberation is not only of concern to Muslims, but for Christians and other Arabs, too.

He condemned those who hijack the cause under the guise of religion and criticized those who relegate the cause by focusing on designating east Jerusalem as the capital of Palestine, as Israel sees the establishment of any Palestinian state as a threat.

“What the Jewish state wants is to strip the Palestinian people of its strengths and to destroy its national and cultural identity,” he said. “And cut it from its history and civilization, because they are connected to the land.”

He urged against normalizing the Israeli occupation, whether through media, economic or touristic means.

State Representative Abdullah Hammoud (D-Dearborn), proclaimed Jerusalem as the eternal capital of Palestine and urged those who cry out against the proposed U.S.-Mexico border wall to be equally as outraged at the apartheid wall that divides people in Palestine.

He called on those who are in solidarity with the Black Lives Matter movement to be equally as concerned about human rights violations and the incarceration of Palestinian children.

“Our values do not die at our borders,” he said. “They must extend far and across the entirety of the world.”

Kristian Davis Bailey, an organizer at Blacks for Palestine, said his group is committed to liberating Palestinians and that it’s important that communities work together to fight for the justice of all individuals.

He said the disparities between east and west Jerusalem were clear to him during his visit there and could only be described with one word: Apartheid.

He compared the expunging of African Americans from Detroit through gentrification to the purging of Palestinians by occupiers.

“In each case, our communities are being punished for their political activism,” he said. He later told The AANews that the core of the issues occurring in Palestine are reflected in the tragedies in Ferguson and Charlottesville.

“Palestine is everywhere,” he said. “For me, Palestinians are family in the way we saw South Africans as family. We all understand what it’s like to experience racism and oppression based on our background, and that’s why they’re our natural allies.”

“The people of the occupation are not afraid of guns, bombs or the occupation,” said Terry Ahwal, former president of the American Federation of Ramallah, Palestine. “What they need is us not to be afraid, they need us to work.”

In the same vein, Turaani said the best answer to Trump was being involved in the Boycott, Divest and Sanction (BDS) movement regarding Israel.

Amer Zahr, a comedian and adjunct law professor at the University of Detroit Mercy, shared his experience in Jerusalem.

“I’ve heard her speak, and she speaks Arabic,” he said. “If you go to her restaurants, she serves falafel and hummus…she serves Arabic food. When Jerusalem listens to music, she listens to Fayrouz, Abdel Halim because she’s an Arab. She’s been an Arab for 1,400 years – 50 years of this White supremacy movement from Europe and this Zionism will not change one thing in Jerusalem…They’ve tried anything to get rid of us.”

“Never,” shouted a woman in the audience.