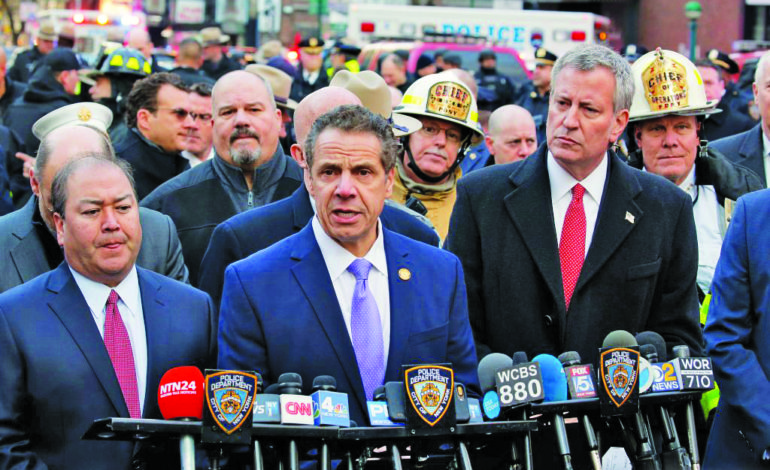 Within hours after Akayed Ullah, a Bangladeshi immigrant, allegedly detonated a pipe bomb in New York City on December 11, severely injuring himself and wounding four others, a most comprehensive official and media narrative emerged.

The formulation of the narrative concerning Ullah’s motives, radicalization and assumed hate for the U.S. was so immaculate, one would have thought it took authorities months, not hours, to compile such demanding evidence.

Strangely, Ullah’s own family was surprised by the accusation concerning their son.

However, the exact nature of what truly happened matters little. Not only was Ullah instantly found guilty by the media, all Muslims and immigrants, in fact, were.

Following each attack of this nature, Muslims in the U.S. mobilize to fend off accusations concerning their faith, their values and their allegiance to the country in which they live.

But it is not an easy fight to win. When President Trump is constantly tweeting anti-Muslim propaganda, while his administration exploits every opportunity to advance anti-immigrant initiatives, the beleaguered small community of Muslims in the U.S. can do little to stop the rising tide of Islamophobia.

The media has played a major role in propagating the negative attitudes towards Muslims and Islam, which, in turn, provide the much-needed public support for the government to continue with its anti-Muslim measures.

Compare such attitudes with the way in which mass shootings carried out by White American men is communicated by the government and media alike.

Although mass killings by White males have proven to be the deadliest in the U.S., the discussion generated in the media and official discourses are centered mostly on mental illness of White attackers. In other words, there is consensus that violence perpetrated by members of the White community is not inherent to that community’s race, culture or religion.

Five years after Adam Lanza killed 20 first graders and six adults at the Sandy Hook Elementary School in Newtown, Connecticut, many are still at work trying to analyze Lanza’s supposed mental illness that drove him to commit such a reprehensible act.

The fact that Lanza was carrying more than 30 pounds of weapons seemed superfluous. Many pundits and politicians still refuse to engage in a discussion about guns.

The “mental health” argument is also championed by Trump himself.

“Mental health is your problem here,” Trump said in a statement in response to a mass shooting by Devin Kelly, a White male who killed more than two dozen people in a Texas church in November.

Resorting to easy answers when White men kill is now the norm. Killers of other races, skin colors and nationalities, however, get entirely different treatment.

As soon as the news emerged of Ullah’s alleged bombing in New York, the Trump administration moved in full force to target immigrants. It called on Congress to end the diversity immigration lottery program and to also shoot down chain migration — a government program that allows for easier immigration based on family connection.

The incessant media coverage and stubborn government targeting of Muslims have led to an unprecedented hysteria which, in turn, led to numerous incidents of Muslims being targeted because of their faith. Many accounts of Muslims being thrown out of airplanes, often kicking and screaming, is becoming a fact of life in the U.S.

When Khairuldeen Makhzoomi was kicked out of a Southwest Airlines flight last year for speaking Arabic on the phone, the agent who escorted him reprimanded him for using his mother tongue in public considering “today’s political climate.”

Anila Dualatzai was dragged down the aisle of a plane heading to Los Angeles. She was “profiled, abused, interrogated, detained and subjected to false reporting and the trauma of racist, vitriolic public shaming precisely because she is a woman, a person of color and a Muslim,” her attorney told the Washington Post.

While this hysteria plays well into the hands of opportunistic politicians like Trump, actual facts suggest that violence is hardly a Muslim phenomenon.

Newsweek reported on statistics showing that White men have committed most of the country’s mass killings. Since 1982, the “majority of mass shootings — 54 percent — were committed by White men”, numbers show.

Stephen Paddock, the 64-year-old White man who massacred 58 people and wounded hundreds more at the Harvest Music Festival in Las Vegas in October, was only one of an ever-growing list.

Countless government officials and journalists have fanned out to find out why Paddock would carry out such a heinous act, as if a White man’s violence is a rare event in a country supposedly threatened by Blacks, Mexicans and Muslims.

Yet the truth is that the White man’s profile is the most violent in the U.S.

“White men commit mass shootings out of a sense of entitlement,” John Haltiwanger wrote in Newsweek.

Research conducted by Eric Madfis from the University of Washington argued in 2014 that, in the U.S., “middle-class Caucasian heterosexual males in their teenage years and in middle age commit mass murder … in numbers disproportionately high relative to their share of the population.”

He ascribed this finding to “White entitlement” and “heterosexual masculinity”, among other reasons.

Still, a whole race, gender and religion are not held suspect; a rule that applies to some and excludes others.

Certainly, anti-Arab and Muslim sentiment in the U.S. has been around for generations, but it has risen sharply in the last two decades. Arabs and Muslims have become an easy scapegoat for all of America’s instabilities and failures.

But demonizing and humiliating brown-skinned men and women is certainly not the way out of the economic, political and foreign policy quagmires which American ruling elites have invited upon their country.

Such unlawful and undemocratic behavior may feed anti-Muslim hysteria a little longer, and give the likes of Trump more fodder for their useless efforts in targeting innocent men and women. But, in the long run, it will do the country much harm, damaging its democratic institutions and contributing to the culture of violence, founded on entitled White men touting guns and killing innocent people.