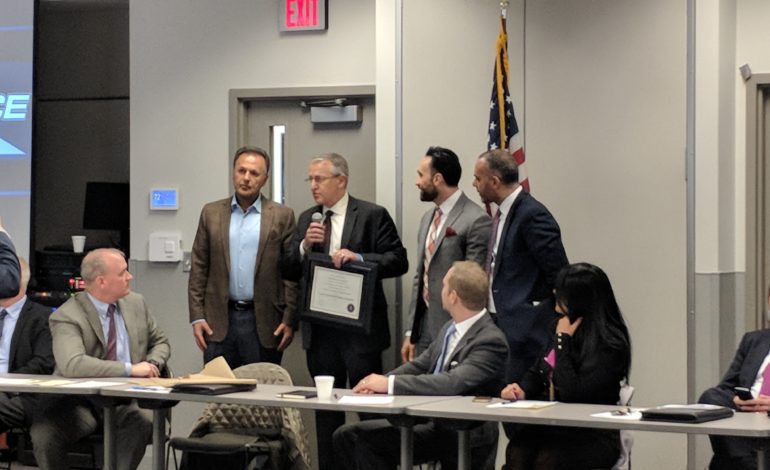 TROY — A transition in leadership is taking place at both the FBI’s Detroit office and in the U.S. Attorney’s Office for the Eastern District of Michigan.

David Gelios, special agent in charge of the FBI’s Detroit office, is retiring on Jan. 31 to take a private sector job in San Diego.

Gelios, who turns 57 in September, would have had to retire by then, anyway. The FBI requires agents to retire at that age.

During a Jan. 10 BRIDGES meeting, Gelios, who was appointed to the Detroit division in 2015, said he fell in love with Michigan.

He also reflected on the cultural education he acquired and said he would not have left his position if it weren’t for the age limit.

BRIDGES (Building Respect In Diverse Groups to Enhance Sensitivity) is a quarterly forum for communication among government agencies and the Arab, Muslim and Chaldean American communities. The meeting took place at the Troy Police and Fire Training Facility.

Gelios, who made the decision to leave for California three weeks ago, said he, “received a great offer from the private sector” that will give him, “long term-stability in the future.” He will be vice president of security at Penske Corporation, a transportation services company whose subsidiaries operate in industries including retail automotive, truck leasing and transportation logistics. The company’s main office is in Bloomfield Hills.

His successor has not yet been announced.

The meeting also included an appearance by Matthew Schneider, the interim U.S. Attorney for the Eastern District of Michigan.

Attorney General Jeff Sessions appointed Schneider to the position. He will serve for 120 days unless a federal court reappoints him or President Trump officially nominates him and he’s confirmed by the Senate.

Former U.S. Attorney Barbara McQuade, who had been the head of the office since 2010, is among 46 federal attorneys and prosecutors who stepped down last March at Trump’s request. Since then, Daniel Lemisch, who’d been second in charge, had served as the acting U.S. Attorney for the Eastern District.

In less than a week at his new job, Schneider set the tone for his office and said, “The strength of America is our diversity, and that’s what brings us together.”

He applauded McQuade’s and Lemisch’s effective community outreach and promised to continue that effort.

Schneider said that while the leadership in the White House changes every four or eight years, the commitment of the U.S. Attorney’s office to civil rights, diversity and protection of Michigan’s communities would not change.

“Our office does not just prosecute criminal cases, we also defend people’s civil rights,” he said.

Since last January, Schneider has served as Michigan’s chief deputy attorney general and oversaw offices that handled about 40,000 ongoing criminal and civil cases.

He was appointed by Gov. Snyder as the Michigan Supreme Court’s chief of staff and general counsel in 2011 and served in that position until 2013. He subsequently served as chief legal counsel for the state until 2016.

According to his LinkedIn page, Schneider also worked as an attorney with Wiley Rein LLP from 2000-2001; was senior advisor and assistant general counsel in the White House Office of Management and Budget from 2001-2003 and worked as a federal prosecutor in Detroit from 2003-2011.

During that time, he prosecuted corrupt public officials and violent gangs and handled some anti-terror cases.

He earned his bachelor’s degree in international relations from Michigan State University in 1996 and his law degree from the University of Michigan Law School in 2000.