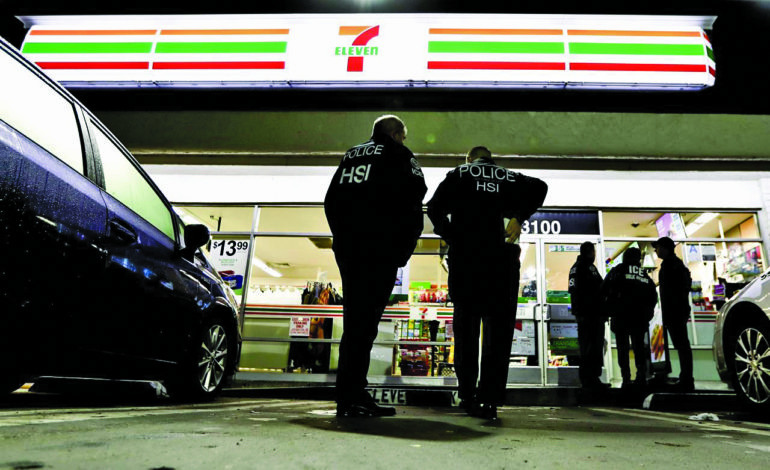 WASHINGTON, D.C. — U.S. immigration agents fanned out to nearly 100 7-Eleven convenience stores nationwide on Wednesday, arresting 21 people suspected of being in the country illegally and giving owners a tight deadline to prove other employees are authorized to work.

The operation was the largest worksite enforcement by U.S. Immigration and Customs Enforcement, or ICE, since President Trump took office last January, agency spokeswoman Danielle Bennett said in an email.

“Today’s actions send a strong message to U.S. businesses that hire and employ an illegal workforce: ICE will enforce the law, and if you are found to be breaking the law, you will be held accountable,” ICE Deputy Director Thomas Homan said in a statement.

Taking a harder line on illegal immigration, including building a wall at the border with Mexico, was a touchstone for Trump, a Republican, during the 2016 election campaign.

At a White House meeting on Tuesday, Trump urged lawmakers to quickly reach a bipartisan deal on a program for “Dreamers”, people who came to the country illegally as children, before moving on to a comprehensive immigration bill.

“Notices of inspection” were delivered on Wednesday to 98 7-Eleven stores in 17 states and the District of Columbia beginning at 6 a.m. in each local time zone. Owners and managers have three business days to produce documents showing their employees are in the country legally or they could face civil and criminal penalties, ICE said.

The 21 people who were “administratively arrested” on Wednesday on suspicion of being in the country illegally were given notices to appear in immigration court and could be deported.