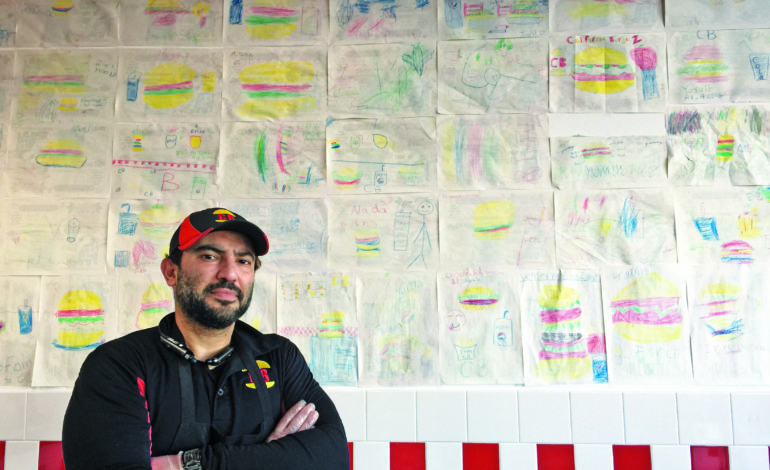 Owner Hani Omasan stands in front of drawings made by some of his younger customers, displayed inside the restaurant - Photos by The AANews / Stephen Martin

HAMTRAMCK — Hani Omasan loves cooking. Although he has worked in different realms of the auto industry for more than 20 years, he’s found cooking burgers to be a great hobby.

Owner Hani Omasan stands in front of drawings made by some of his younger customers, displayed inside the restaurant – Photos by The AANews / Stephen Martin

“I really love burgers,” Omasan, who also owns Top Gearz Auto Sales, told The AANews about his passion project. “I love to study parts of the cow. I love to know which one is lean, where is the fat part, where is the lean part. And then what happens when you mix that with that.”

The Yemeni immigrant and Hamtramck High School graduate said he learned all he knows from reading and experience.

He also said many places around the city offer Halal beef, but it’s in the form of shawarma, not burgers.

Omasan said his son would drive to places like Sterling Heights and Bloomfield Hills to hang out and that he wanted to give the community somewhere close by to enjoy a dining experience with a good burger.

He cited the In-and-Out Burger restaurant chain in California, which uses fresh ingredients to make all its food, as in inspiration and said he does the same. All of his ingredients are brought in daily from the nearby meat markets.

Omasan said he has spent a considerable amount of time in California and would bring some of the famous In-and-Out burgers home with him.

“I used to take [the] spread home and try to replicate things, the taste,” he said. “I think I got a solid spread now.”

Omasan said he has a good product and is working all day and night at the restaurant to maintain a consistency in his burgers for the community.

The burgers range from $5.99 to $10.49. The most expensive, the “Quad CB burger”, is one full pound of beef with pickles, lettuce, tomato, onions, American cheese and California Burgerz sauce served on a Brioche bun.