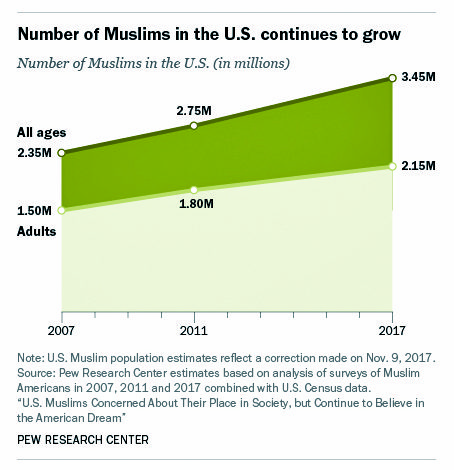 WASHINGTON D.C. — The Pew Research Center recently released a report stating that Muslim Americans in the United States constitute 1 percent of the total U.S. population, but a Muslim advocacy group questions the results.

In the report, The Pew Research Center claims that as of 2017, there are 3.45 million Muslims of all ages in America, making up to 1.1 percent of the total U.S. population.

The report also suggested that by 2040, Islam would supplant Judaism as the second largest religion in America.

According to Dawud Walid, the executive director of the Michigan chapter of the Council on American-Islamic Relations (CAIR-MI), the report has some discrepancies.

“The primary device that the Pew Research Center uses to determine the number of Muslims in America is examining their names; those with Arabic or Farsi roots specifically,” Walid said.

CAIR is the largest advocacy and civil liberties organization for American Muslims. Walid added that there are 7 million Muslims in America, including tens of thousands of people who convert to Islam and do not change their names.

He also told The AANews that converts come from various communities, including Hispanics, African Americans and Whites.

For his part, Besheer Mohammed, author of the Pew report, said it was “absolutely untrue” that Pew used name origins as a measuring tool of the number of Muslim Americans.

“The way we do it is through surveying a large number of random households where we ask them about self-identity and the religion that they identify with,” Mohammed said. “We do not base any statistic or measure on the names of the people surveyed because a Mohammed in America could identify as non-Muslim, whereas there could be a Bob who identifies as Muslim.”

When asked about Walid’s remarks about the number of Muslim Americans, Mohammed said he wasn’t aware of other organizations that conducted a social scientific research that produced results with such significant differences.

He also said the assumption there are more Muslim Americans in the U.S. is perhaps based on states with large concentrations of Muslims. He said Muslims aren’t distributed evenly across the country, so someone who grew up in Dearborn, New York or Washington D.C.— where Muslim populations are large— might be more inclined to believe there should be more Muslim Americans, when in reality there are large areas where other Americans have never met a Muslim American.

Mohammed said that he is “comfortable with and confident of the numbers” in his report.