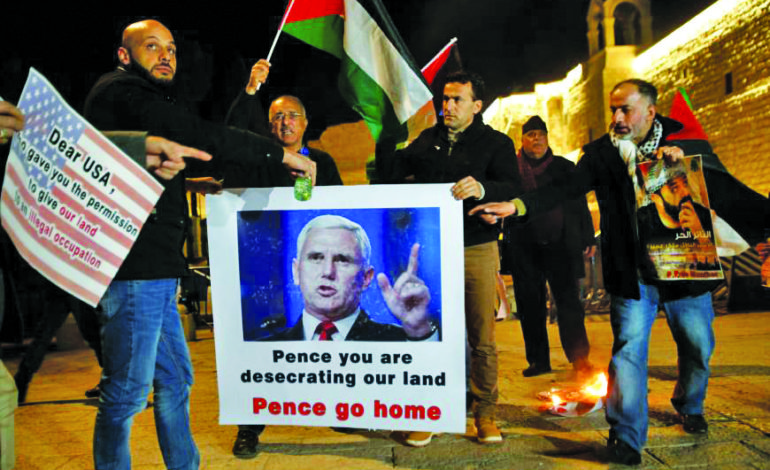 Palestinians take part in a protest over the visit of U.S. Vice President Mike Pence to Israel, in the West Bank city of Bethlehem on Sunday - Photo by Reuters

DAVOS, Switzerland — President Trump threatened on Thursday to withhold aid to the Palestinians if they did not pursue peace with Israel, saying they had snubbed the United States by not meeting Vice President Mike Pence during a recent visit to the region.

Earlier, Palestinian members of Israel’s parliament were ejected from the Knesset on Monday, as they stood to protest against a speech by Vice President Pence recognizing Jerusalem as Israel’s capital.

Members of the Joint List coalition of Palestinian parties had pledged to boycott the Pence speech in protest of a December 6 decision by President Trump to recognize Jerusalem as Israel’s capital.

On Saturday, MP Ayman Odeh, leader of the Joint List party, said Pence was a “dangerous man with a messianic vision that includes the destruction of the entire region.”

A number of parliamentarians began shouting and holding up protest signs at the beginning of Pence’s speech, before ushers pushed them out.

Trump, speaking after a meeting with Israeli Prime Minister Benjamin Netanyahu at the World Economic Forum in Davos, said he wanted peace. However, his remarks could further frustrate the aim of reviving long-stalled Israeli-Palestinian talks.

Palestinians shunned Pence in his recent visit to the region after Trump recognized Jerusalem as Israel’s capital and vowed to begin moving the U.S. embassy to the city, whose status is at the heart of the Israeli-Palestinian conflict.

Trump’s endorsement of Israel’s claim to Jerusalem as its capital drew universal condemnation from Arab leaders and criticism around the world. It also broke with decades of U.S. policy that the city’s status must be decided in negotiations between Israel and the Palestinians.

“When they disrespected us a week ago by not allowing our great vice president to see them, and we give them hundreds of millions of dollars in aid and support, tremendous numbers, numbers that nobody understands — that money is on the table and that money is not going to them unless they sit down and negotiate peace,” Trump said.

Palestinians to Trump: Our rights are not for bargain

A spokesman for Palestinian President Mahmoud Abbas said the United States had taken itself “off the table” as a peace mediator since it recognized Jerusalem as Israel’s capital.

“Palestinian rights are not up to any bargain and Jerusalem is not for sale,” spokesman Nabil Abu Rdainah told Reuters by phone from Jordan. “The United States can’t have any role unless it retreats its decision to recognize Jerusalem as Israel’s capital,.

Abbas has called Trump’s Jerusalem declaration a “slap in the face” and has rejected Washington as an honest broker in any future talks with Israel. Abbas left for an overseas visit before Pence arrived.

Abbas has said he would only accept a broad, internationally backed panel to broker any peace talks with Israel. The U.S. ambassador to the U.N., Nikki Haley also criticized Abbas.

Speaking in Davos, Netanyahu said only the United States could broker a peace deal.

“I think there’s no substitute for the United States,” Netanyahu said. “As the honest broker, as a facilitator, there’s no other international body that would do it,.

Trump said Palestinians had to come to the negotiating  table.

Trump said his administration had a peace proposal in the works that was a “great proposal for Palestinians”, which covers “a lot of the things that were over the years discussed or agreed on”, without providing specifics.

Trump said his declaration on Jerusalem took it off the negotiating table “and Israel will pay for that”, adding “they’ll do something that will be a very good thing”, without elaborating.

Earlier at the World Economic Forum, Jordanian King Abdullah said Jerusalem had to be part of a comprehensive solution.

He said Trump’s decision had created a backlash, frustrating Palestinians who felt there was no honest broker.

But he added, “I’d like to reserve judgment because we’re still waiting for the Americans to come out with their plan.”

King Abdullah’s Hashemite dynasty is the custodian of the Muslim holy sites in Jerusalem, making Jordan particularly sensitive to any changes of status there.

The last talks collapsed in 2014, partly due to Israel’s opposition to an attempted unity pact between Palestinian factions Fatah and Hamas, and because of Israeli settlement building on occupied land that Palestinians seek for a state, among other factors.

Palestinians want the West Bank for a future state, along with East Jerusalem and the Gaza Strip. The international community considers the Israeli settlements as illegal, built in an occupied territory Israel captured by force in the 1967 Middle East war.

The United States has said it would support a two-state solution if the Israelis and Palestinians agreed to it.