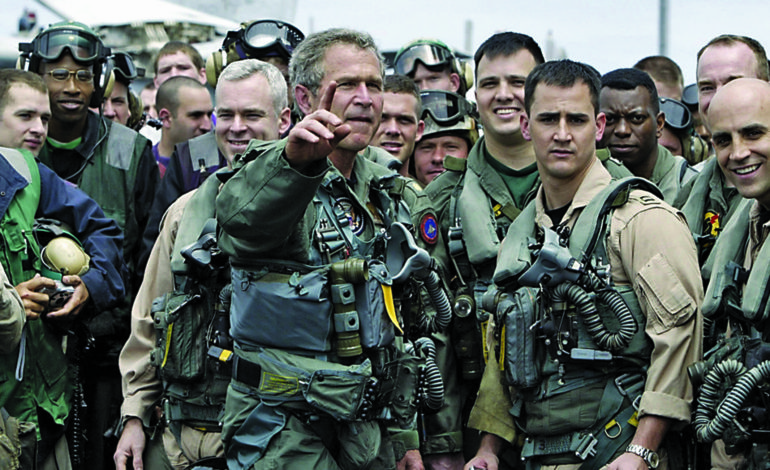 File Photo: Former President George W. Bush meets pilots and crew members of the aircraft carrier USS Abraham Lincoln as they return to the U.S. after being deployed

Fifteen years ago this week, while the Bush Administration was busy beating the drums for an invasion of Iraq, I submitted a resolution calling on the Democratic National Committee (DNC) to oppose this rush to war. The resolution, which was also endorsed by then Congressman Jesse Jackson Jr., who served with me on the DNC, warned that there were still too many unanswered questions that required examination before we should endorse sending troops to invade and occupy Iraq. I felt it was of critical importance that we have a full debate before, and not after, the war had started.

In short, my DNC resolution warned that it would be a mistake to drain resources and attention away from the still unfinished effort in Afghanistan; that by violating international law and invading Iraq without the support of a U.N. Security Council resolution, we would be setting a dangerous precedent for other nations; that the Bush administration had not defined the strategic objectives of this war, nor had they been honest with the American people about the cost, the terms of engagement and the consequences of this war; that a destabilized Iraq would create regional tension; that the war would result in the spread of extremist anti-American sentiment; and that there was danger in making a long-term commitment to a war in a country about which we knew too little.

The resolution concluded that the DNC should oppose this rush to war and instead urge President Bush “to continue to pursue diplomatic efforts to achieve disarmament of Iraq, to clearly define for the American people and Congress the objectives, costs, consequences, terms and length of commitment envisioned by any U.S. engagement or action in Iraq, and to continue to operate in the context of and seek the full support of the United Nations in any effort to resolve the current crisis in Iraq.”

In formulating the resolution, I had in mind what had been called “The Powell Doctrine” – principles that had been formulated a decade earlier by then General Colin Powell, based on his experiences in Vietnam and several other disastrous U.S. military engagements that had followed that tragic war.

In short, Powell argued that the U.S. should not consider committing troops in any conflict unless the military and political objectives were clearly delineated; there was a reasonable expectation that the Congress and the American people understood the costs of this commitment and would support it and would sustain their support and that all possible peaceful means of resolving this conflict had been exhausted.

Since the Bush administration had met none of these conditions, I believed that it was reckless for the U.S. to send our young men and women into harm’s way. More than that, I was deeply concerned that we were about to engage in a conflict in a country whose history and culture we did not know and, therefore, had no idea what might be the consequences of our invasion and occupation. For all these reasons, I believed that it was important for my party to be on record opposing what I felt “in my bones” was a disaster in the making.

The problem I was to discover was that we were at the very start of the 2004 presidential contest and the Democratic Party’s candidates were not of one mind on the merits of the war. Because some were for it, while others were opposed, the party’s leaders didn’t want to have the DNC take a position. I was urged not to introduce the resolution.

I resisted, insisting that the war needed to be debated. In the end, I was allowed to introduce the measure and speak on its merits, but that neither a debate nor a vote would be permitted. That, I believed, was a mistake.

It was similar to the mistake Democrats had made in September of 2002 before that year’s mid-term elections. Back then, the Bush administration was pushing hard to get some sort of war-making authorization from Congress. In the face of the Republicans’ bullying tactics, the Senate Democrats folded. They incorrectly assumed (and the party’s pollsters told them) that if they gave the president his resolution they could then focus the last two months before the election on what they called “their issues” – the economy, corporate corruption and health care. At a DNC meeting a few weeks before the Senate debate, I had warned that this strategy was wrong. I said that the Bush administration would not give us opportunity to pivot away from war.

Sure enough, with the war-making resolution in his hand, an emboldened Bush assumed the mantle of a “president at war” and the Republican’s focus on fear and insecurity paved the way to their taking control of the Senate in November, 2002.

In February 2003, I was concerned that if Democrats did not stand against this war we would risk losing in the future.

By then, the “writing was on the wall.” With or without my resolution, the war was going to happen. In 2003, Democrats were in a minority in Congress and couldn’t block Bush’s war, even if they were unified in opposition. But the principle of having been opposed to a war we should have known wasn’t going to turn out well would have put us in a stronger position in future elections.

I knew that this debate over the war would only continue as time wore on. And it did. It played out among the Democratic candidates in the 2004 contest. It was a factor again in the 2008 contest and again in the 2016 Democratic primary race. And the decision to go to war and the consequences of that fateful decision continue to be debated today.