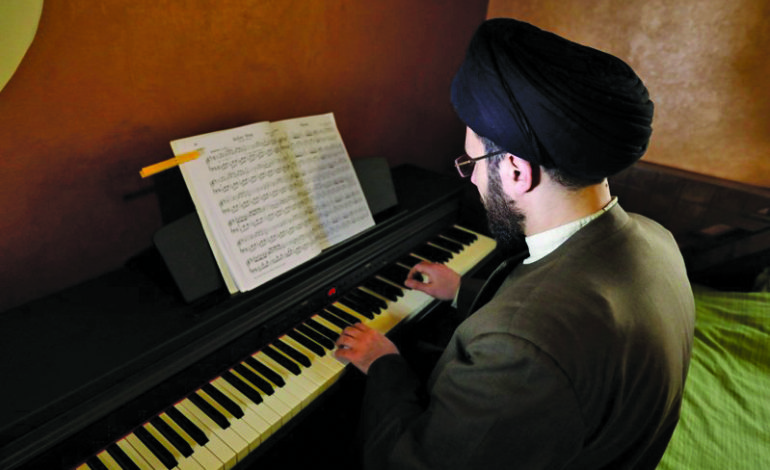 Sayed Hussein al-Husseini, 38, looks at musical notes at his home in Dahieh, March 22

BEIRUT — A Muslim cleric has been expelled from his seminary in Lebanon after a video of his piano playing, posted online, drew criticism from conservatives who felt it was undignified behavior for a man of the cloth, he said.

Shi’a Muslim Sayed Hussein al-Husseini, 38, a keen pianist and amateur poet, posted the footage to challenge the traditional image of a cleric.

But the sight of a man in turban and robe performing – even demure classical music – at the piano was a step too far for some.

“I wanted to show that religious study should not be isolated from the world, or from people or from other studies,” Husseini told Reuters, saying the al-Thaqalain seminary in Beirut had expelled him, cancelling his stipend. It declined to comment.

Ayatollah Ali Sistani, the highest Shi’a leader in Iraq, and one revered by many Lebanese, has said that neither the piano nor classical music are prohibited in Islam.

But Husseini has received online criticism and has heard that some religious leaders consider his video as “an insult to the turban.”

“I am a music and art lover,” social media user jouj lebiiiiii tweeted. “But it is impossible for me to accept the image of a cleric in a turban playing in front of people. The turban is sacred and I have a right to criticize.”

Husseini posted the video earlier in March on his social media account and said that within one hour it was viewed more than 10,000 times.

In addition to the music, Husseini regularly posts love poems he has written. He used to write lyrics for Hezbollah songs, praising the Iran-backed Lebanese group and its fighters.

“People consider the man of religion as sacred, strange even, someone who cannot be criticized and cannot do wrong,” said Husseini who lives with his cat, Caesar, in Dahieh, Beirut’s southern suburb.

Husseini said he disagreed with the dour image of Muslim clerics.

“Religious men have been forced into feigning a certain way of behaving. They speak slowly. When they move, they move as if they are in the throes of death, to show that they are spiritual,” he said. “This is what people expect.”