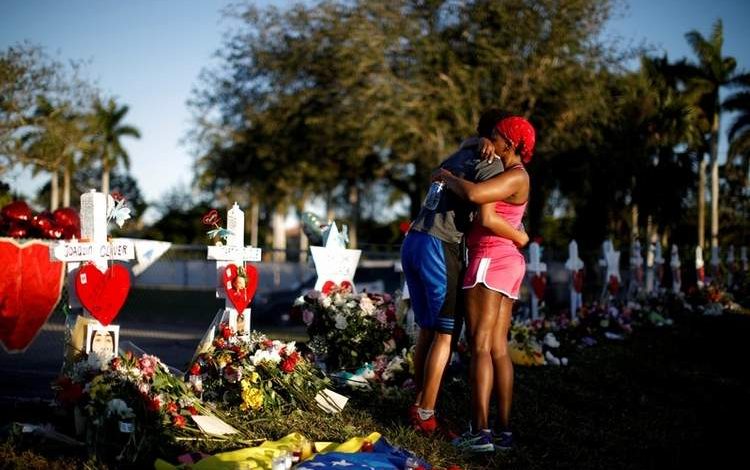 A Marjory Stoneman Douglas High School student embraces his mother next to a commemoration of the victims of a shooting in Parkland, Florida, February 19 - Reuters

NEW YORK – Before the ink could dry on Florida Governor Rick Scott’s signature last month, critics cried foul over the bill he signed into law to spend $400 million boosting security at schools across the state following February’s Parkland mass shooting.

School officials, local sheriffs and Democrats opposed different provisions, including one to provide $67 million to arm teachers. Educators, in particular, voiced concerns that the state will strip money from core education funding to pay for the new school resource officers and beefed up buildings.

In the wake of the high school shooting in Parkland, Florida that killed 17 people, at least 10 U.S. states have introduced measures to increase funding for hardening of school buildings and campuses, add resource officers and increase mental health services, according to Reuters’ tally.

Many of the proposals outlined the need for bulletproof windows, panic buttons and armored shelters to be installed in classrooms. Some legislation called for state police or sheriff’s departments to provide officers to patrol public schools.

Altogether, more than 100 legislative bills to address school safety, not all of which have funding components, have been introduced in 27 states since the Feb. 14 shooting at Florida’s Marjory Stoneman Douglas High School, according to data provided by the National Conference of State Legislatures.

But states do not usually have extra money on hand or room to raise taxes. So to pay for the measures, states are mostly shifting money away from other projects, dipping into reserves or contemplating borrowing.

Calls for more gun control and more safety measures have come during peak budget season for nearly all states, whose legislatures spend the spring in debates that shape the coming year’s budget starting July 1.