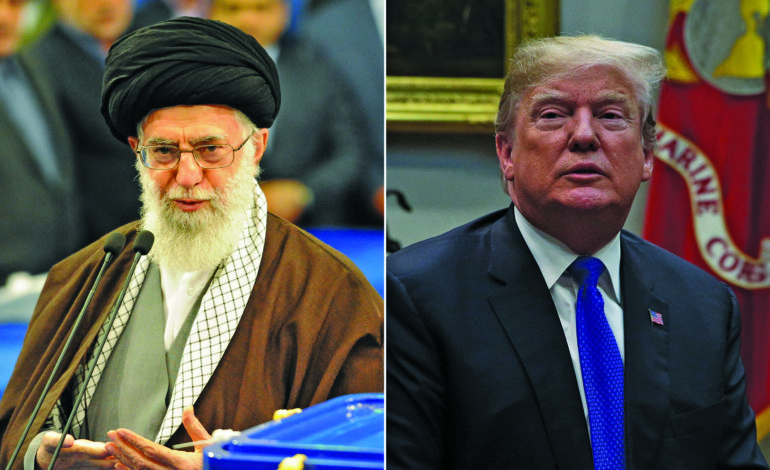 WASHINGTON/TEHRAN — on Monday, the Trump administration demanded that Iran make wholesale changes in its military and regional policies or face “the strongest sanctions in history” as it sought to turn up heat on Tehran after President Trump’s decision to withdraw from a landmark nuclear deal.

In speech that called Iran out for a wide range of “malign activities” apart from its nuclear program, Secretary of State Mike Pompeo called for the negotiation of a new deal that would go far beyond the single focus of the 2015 agreement and would have the status of a formal treaty. The 2015 deal concluded under the Obama administration dealt only with the nuclear program and was not a treaty but rather a U.N.-endorsed executive agreement between the parties.

“Secretary Pompeo’s speech has not demonstrated how walking away from the JCPOA has made or will make the region safer from the threat of nuclear proliferation.” -Federica Mogerhini, European Union foreign policy chief

Unless such a treaty can be reached, Pompeo warned that Iran would face tough sanctions that would leave it “battling to keep its economy alive.” But he laid out no strategy for convincing Iran, the other participants in the original deal — Britain, China, France, Germany, Russia and the European Union — or others to open such a negotiation.

“These will end up being the strongest sanctions in history by the time we are complete,” Pompeo said at the conservative Heritage Foundation in his first major policy speech since taking over as top diplomat.

Pompeo vowed Trump’s approach would ensure Iran would never develop a nuclear weapon. A new pact should require that Iran stop enrichment of uranium, which was allowed within strict limitations under the previous deal. Iran would also have to walk away from core pillars of its foreign policy, including its involvement in Syria, Yemen, Lebanon and Afghanistan, he said.

“This list may seem long to some, but it is simply a reflection of the massive scope of Iranian malign behavior,” Pompeo said. “America did not create this need for changed behavior. Iran did.”

In response, Iranian President Hassan Rouhani described Pompeo’s speech as unacceptable and took issue with the fact that the secretary of state previously led the CIA, long demonized in Iran for its role in a 1953 coup.

“A guy who had been active in an espionage center for years now wants to make a decision for Iran and other countries from the position of a foreign minister,” Rouhani said to a group of university teachers in Tehran. “It is not acceptable under any circumstance. Who are you to make a decision for Iran and the world and to tell Iran what to do and what not to do in the nuclear field?”

Pompeo did offer Iran a series of dramatic potential U.S. concessions if it agrees to make “major changes.” Under a new agreement, the U.S. would be willing to lift all sanctions, restore full diplomatic and commercial ties with Iran and even support the modernization of its economy, Pompeo said.

“It is America’s hope that our labors toward peace and security will bear fruit for the long-suffering people of Iran,” he said.

Still, Pompeo’s list of 12 requirements included many that Iran is highly unlikely to consider. He said Iran must allow nuclear inspectors “unqualified access to all sites throughout the country”, alluding to military sites that were off-limits under the 2015 deal except under specific circumstances. To that end, he also said Iran must declare all previous efforts to build a nuclear weapon, reopening an issue that the U.N.’s International Atomic Energy Agency has already deemed a closed matter.

Pompeo also demanded that Iran cease from a range of activities throughout the Middle East that have long drawn the ire of the U.S. and its allies. He said Iran must end support for Shi’a Houthi rebels in Yemen, “withdraw all forces” from Syria, halt support for its ally Hezbollah and stop threatening Israel.

Iran must also “release all U.S. citizens” missing in Iran or being held on “spurious charges,” he said.

Taken together, the demands would require a complete transformation by Iran’s government and they hardened the perception that the administration is really seeking regime change. A longtime Iran hawk, Pompeo has spoken positively about regime change in the past, but in his confirmation hearing last month he sought to soften that stance.

Laying out Trump’s new approach Monday, Pompeo said he couldn’t put a timeline on how long the strategy might take.

British Foreign Secretary Boris Johnson, speaking to reporters in Argentina, said he believed packaging all of Iran’s concerning behavior into one agreement would be a heavy lift.

European Union foreign policy chief Federica Mogerhini said in a statement that Pompeo had not shown how resolving any of Iran’s problematic non-nuclear activities would be easier done outside of the deal, which is known as the JCPOA, the acronym for the Joint Comprehensive Plan of Action.

“Secretary Pompeo’s speech has not demonstrated how walking away from the JCPOA has made or will make the region safer from the threat of nuclear proliferation or how it puts us in a better position to influence Iran’s conduct in areas outside the scope of the JCPOA,” she said. “There is no alternative to the JCPOA.”

Pompeo said he understood that Trump’s decision “will pose financial and economic difficulties for a number of our friends.” But he warned them that the U.S. planned to follow through with threats to punish European companies that continue doing business with Iran that is allowed under the deal but will violate reimposed U.S. sanctions.

“I know our allies in Europe may try to keep the old nuclear deal going with Tehran,” Pompeo said. “That is their decision to make. They know where we stand.”

Iran sets conditions for Europe to remain in nuclear deal

Meanwhile, on Wednesday, Iranian Supreme Leader Ayatollah Ali Khamenei set out a list of conditions for European powers if they want a guarantee that Iran would remain within the nuclear deal.

Among the list of conditions, Khamenei demanded that European banks “safeguard trade with the Islamic Republic”, saying Tehran does “not want to start a fight with these three countries”, making a reference to Britain, France and Germany.

The guarantee to increase the purchase of Iranian oil was also demanded as, “in case Americans can damage our oil sales…Europeans should make up for that and buy Iranian oil.”

Khamenei also alleged that the European powers had remained silent as the U.S. “repeatedly violated” the nuclear deal and demanded that the way for Europe to “make up for that silence” would be to “stand up against the U.S. sanctions.”

Another demand is that European powers must promise that they would not attempt to seek new negotiations on Iran’s ballistic missile program and other regional activities within the Middle East.

Khamenei concluded by warning that if Europe did not meet Iran’s demands and conditions, the country would resume its enrichment of uranium that would enable it to fully develop nuclear weapons, which was halted under the agreement of the now-endangered nuclear deal struck in 2015.

After President Trump announced that the United States was pulling out of the landmark deal in early May, EU members, including France’s President Emmanuel Macron and U.K. Prime Minister Theresa May, appealed to Trump to reconsider his decision in order to prevent Iran resorting to continuing its nuclear weapons program. In retaliation to Trump’s betrayal of the agreement initiated by his predecessor, Barack Obama, and the subsequent U.N. Resolution 2231, Khamenei urged Europe to secure “a resolution against the U.S. violation.”

Since Khamenei announced the conditions for remaining in the nuclear deal, both France and China have confirmed that they will stand by the existing nuclear deal, a move that will likely anger the White House.