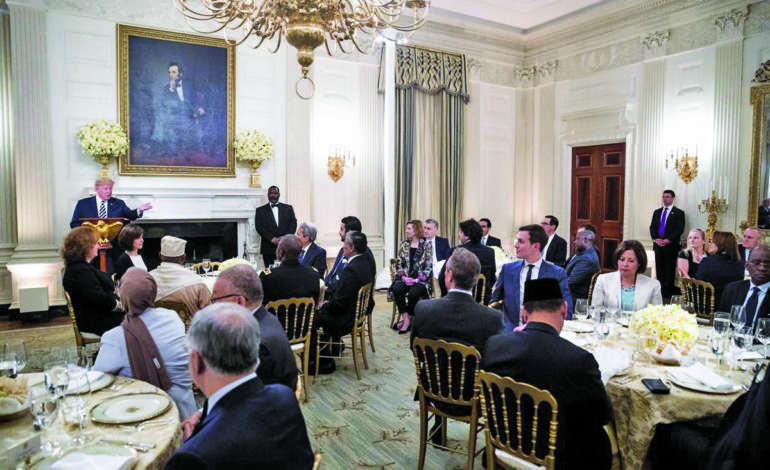 WASHINGTON, D.C. — After declining to mark Ramadan last year with a traditional iftar dinner, which breaks the daily fast during the Islamic holy month, the White House held one Wednesday night with a few dozen guests, many of them ambassadors from Muslim nations.

Meanwhile, some Islamic groups that were not invited, led by the Council on American-Islamic Relations (CAIR), held a “NOT Trump’s Iftar” event outside of the White House in Lafayette Square, where protesters held signs reading “Go Muslims” and “#No Muslim ban.”

“It is difficult to view the event as part of an outreach campaign to the Muslim community,” CAIR spokesman Ibrahim Hooper said.

“If the White House is interested in inviting foreign government leaders from largely corrupt, Muslim-majority countries that exhibit inequitable and unjust policies upon their own populations, that seems to be in line with the tenor of the current U.S. administration,” Islamic Society of North America interfaith director Colin Christopher told HuffPost.

“There has been no effort from this president or his administration to reach out to the Muslim community in this country,” Hoda Hawa, director of policy and advocacy at the Muslim Public Affairs Council, previously told the Daily News.

“At tonight’s dinner, we especially are pleased to welcome members of the diplomatic corps, representing our friends and partners across the globe,” Trump said. “And a very warm welcome to all of the ambassadors here tonight representing Muslim-majority nations. We’re greatly honored by your presence, and thank you very much for being here. Some very good friends. To each of you and to the Muslims around the world, Ramadan Mubarak.

“In gathering together this evening, we honor a sacred tradition of one of the world’s great religions,” Trump added. “For the Islamic faithful, the iftar dinner marks the end of the daily period of fasting and spiritual reflection that occurs throughout the holy month of Ramadan. Iftars mark the coming together of families and friends to celebrate a timeless message of peace, clarity and love. There is great love. It’s a moment to call upon our highest ideals and to give thanks for the many blessings we enjoy. Thank you very much.

“Tonight, we give thanks for the renewed bonds of friendship and cooperation we have forged with our valued partners from all across the Middle East,” he added. “So many of you I spent time with not so long ago — about a year ago. That was one of the great two days of my life. That was one of the most fabulous times and I think we accomplished a lot together.”

Trump ended his remarks at the “magnificent dinner” by calling on all to “strive to embody the grace and goodwill that mark the Ramadan season.”

“Let us pray for peace and justice and let us resolve that these values will guide us as we work together to build a bright and prosperous future that does honor and glory to God,” he said.