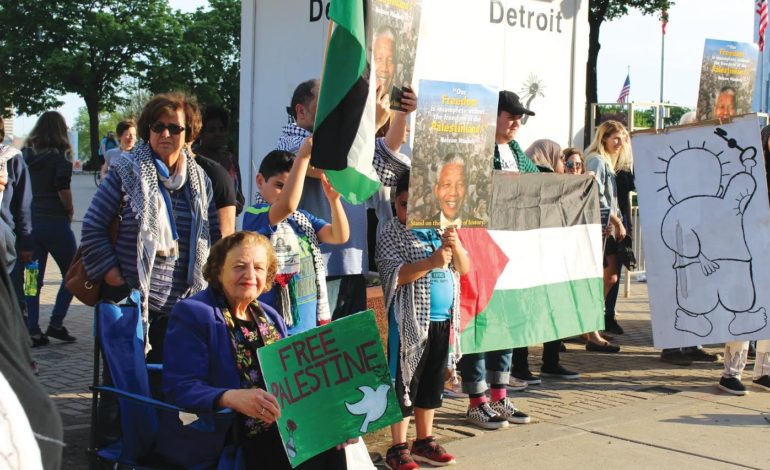 Activists in Detroit protesting Israeli aggression against Palestinians, May 14 - Photo by The AANews

DEARBORN – As grisly images from “Right of Return” protests along the Gaza-Israeli border become increasingly harder for the American public to ignore, lawmakers across the U.S. are reacting with anti-BDS bills that seek to hamper efforts to boycott the nation’s most significant ally in the Mediterranean – shifting the conversation about the conflict from abstract debates to one of strategy.

Coinciding with the U.S. decision to move its embassy from Tel Aviv to Jerusalem, which sparked the protests that have resulted in about 130 deaths so far, the U.S. Senate revisited a bill in early March that proposes to criminally punish American entities from engaging in the campaign to boycott, divest from and sanction (BDS) companies that do business with Israel.

The bill (S. 720) calls for the prohibition of “boycotts fostered by international governmental organizations against Israel and to direct the Export-Import Bank of the United States to oppose boycotts against Israel.”

It was initially a response to the United Nations Human Rights Council’s decision to blacklist companies operating in occupied Palestinian territories. On Tuesday, the Trump administration pulled out of the U.N. Human Rights Council, saying it’s hypocritical in who it criticizes. 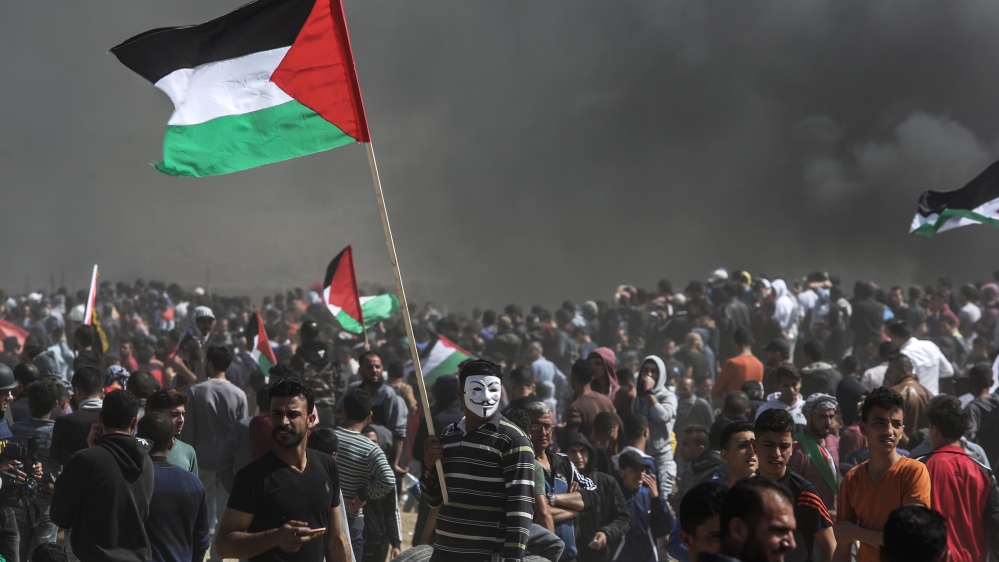 Palestinians protest against the U.S. embassy’s move to Jerusalem and ahead of the 70th anniversary of Nakba, at the Israel-Gaza border, May 14 – Reuters

The updates by Senators Cardin and Rob Portman (R-Ohio) were aimed at ensuring free speech was protected and also removed a section about violators potentially facing imprisonment. Instead, they now only face a financial penalty, among additional more minor changes.

In respective statements, both senators expressed their confidence that the bill, “upholds the rights of individual Americans while clarifying decades-old legislation” and that it, “strikes the right balance between protecting U.S. businesses and our Israeli allies from unfair targeting by international organization.”

A total of 55 senators have cosponsored the senate bill, including Sen. Gary Peters (D-Mich.).

Michigan is home to the third largest Arab American populations in the nation, according to 2010 U.S. Census data, and many of them have deep roots in countries impacted by war or acts of aggression by Israeli Defense Forces.

In an email to The AANews, Peters underscored the value of free speech amid “serious challenges” the country was facing and said he took the concerns of community leaders and constituents to the bill’s authors before signing his name.

“I am encouraged that the legislation was modified to make more clear that nothing in the text of the bill should be interpreted as a way to infringe on the Constitutionally-protected rights of Americans,” Peters said, adding that the legislation simply protects commercial businesses that may be pressured into complying with boycotts called for by international organizations or foreign states that would supersede existing U.S. law.

However, other officials and activist organizations charge that the anti-BDS bill still explicitly violates Americans’ civil rights by criminalizing participation in Constitutionally protected boycotts, ensured by a Supreme Court decision protecting the 1960s boycott of White-owned businesses in Mississippi.

Sen. Debbie Stabenow (D-Mich.) told The AANews late last month that said she didn’t support the bill because she felt it infringes on First Amendment rights and that it was “not written in a way” that would make her sign on.

She also criticized the Trump administration’s approach and decision to move the U.S. embassy to Jerusalem, saying the president should have taken advice against doing so.

“I think it’s very regretful what they did,” she said. “And it really breaks my heart when I see what’s happening in terms of the violence.”

However, Stabenow has co-signed resolutions that favor continued U.S. support of Israeli settlement expansion, including ones that maintain Israeli defense systems and that are against Israel returning to the armistice lines that existed on June 4, 1967.

An identical bill in the House of Representatives (HR. 1697), introduced by U.S. Rep. Peter Roskam (R-Ill.) also awaits a vote. So far, 287 representatives have cosponsored the bill.

Rep. Debbie Dingell (D-Dearborn) criticized her colleagues’ support of the bill and upheld the right for American entities to boycott Israel.

“Freedom of speech is a fundamental pillar of our Constitution, and political boycotts are wildly recognized as protected under the First Amendment,” Dingell told The AANews in a statement. “I share the concerns of the ACLU and other civil rights organizations about any legislation that would seek to dictate political activities that Americans can and cannot engage in.”

In Michigan in January, Gov. Snyder signed into law two bills prohibiting all state agencies from entering into a contract or hiring anyone “unless the contract includes a representation that the person is not currently engaged in, and an agreement that the person will not engage in, the boycott of a person based in or doing business with a strategic partner.”

The bills aim to protect Michigan’s economy from the devastating financial effects of boycotting Israel, as its engaged with economic trade totaling tens of millions of dollars annually with Israeli entities and partners with commercial interests in Israel. Major trade sectors include technology research and development, defense and health sciences.

In May, Louisiana’s governor issued an anti-BDS executive order. Ohio also passed a similar law in December, following legislation in Pennsylvania in November, California and Texas in September, New Jersey in August and Rhode Island in June of last year. A few other states have followed suit. Earlier this month, New York’s State Senate voted to prohibit state entities or contractors from boycotting Israel.

“This isn’t about Palestine,” Hammoud told The AANews.  “This is about having the right to peacefully protest through BDS means on any issue.”

He slammed legislators for prioritizing the protections of profit, rather than the public’s civil rights.

In spite of legislative efforts to suppress BDS campaigns, the laws’ constitutionality are slowly being challenged in the courts, mainly led by organizations like the American Civil Liberties Union (ACLU).

In Kansas, a federal court sided with the ACLU in a lawsuit against the state government on the law requiring state contractors to certify that they aren’t participating in boycotts of Israel. The case involved a trainer of teachers with the Kansas Department of Education’s Math and Science Partnerships program who also called for boycotting Israel as a church leader.

Dan Korobkin, deputy legal director of the ACLU of Michigan, told The AANews the organization was committed to fighting laws that open a pandora’s box for First Amendment violations.

“No matter what you think about the Israeli-Palestinian conflict, one thing is clear: The First Amendment protects the right to engage in political boycotts,” Korobkin said. “Some of our country’s proudest moments in social change have been founded on boycotts, from the famous Montgomery Bus Boycott of the 1950s to the boycotts against apartheid in South Africa in the 1980s.  Anti-boycott legislation threatens fundamental First Amendment freedoms and should not be enacted.”

The power of grassroots activism

With the majority of top lawmakers keen on protecting American interests with Israel, the voices of ordinary Americans are seen by the advocacy community as the strongest front in the battle for Palestinian rights.

Instead of relying on countering a strong pro-Israeli lobby with deep pockets in Washington, D.C., BDS activism has mostly thrived on the individual and collective efforts of America’s college and university students and residents of communities who continue to demand from their student government bodies and city councils that they pass resolutions denouncing anti-BDS laws or boycotting Israel.

Some BDS efforts at those entities were successful, including the University of Michigan’s Central Student Government passing a resolution in November asking the university to look into divesting from companies that profit from Israel, including from Boeing, Hewlett-Packard and United Technologies.

Last month, the University of Oregon’s student government passed a resolution for the university to break ties with Israel. Last week, a student workers union representing 16,000 University of California students called on the school to divest from companies that partake in “the oppression of Palestinians.” 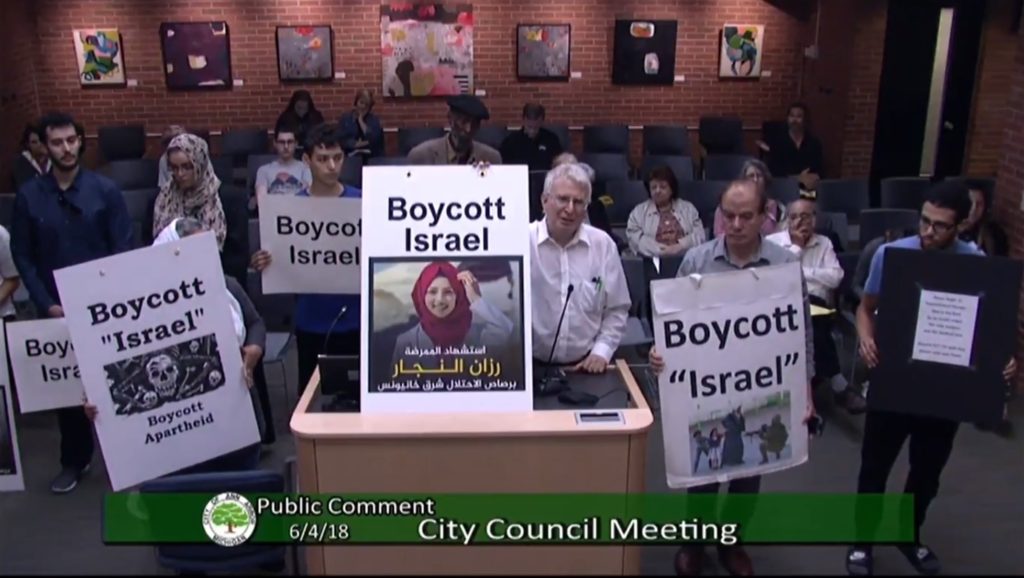 A screen grab of Blaine Coleman and other activists demand the Ann Arbor City Council hear a hearing on a resolution to boycott Israel, June 4

Blaine Coleman, an Ann Arbor Palestinian rights activist who helped U of M students in organizing the BDS campaign and gathering a sizable audience during controversial deliberations, told The AANews Americans should learn from Palestinians’ strategy of marching en masse and ensuring their voices are being heard.

For more than a decade, Coleman has protested with signs and chants at Ann Arbor City Council meetings, asking that it hold a public hearing, so people can speak out in support of BDS at the city level.

“No city council can stop you from demanding action against Israel,” he said. “As the First Amendment says, you have the right to ‘petition the government for a redress of grievances.’ Sign up to speak beforehand, sit on the front row and sit your boycott signs in front of you. You may have to wait for hours in the Dearborn City Council, but the Council will see your signs. The news media will see your signs. You’ll make sure they remember the Dearborn families who bled under Israeli bombs and bullets.”