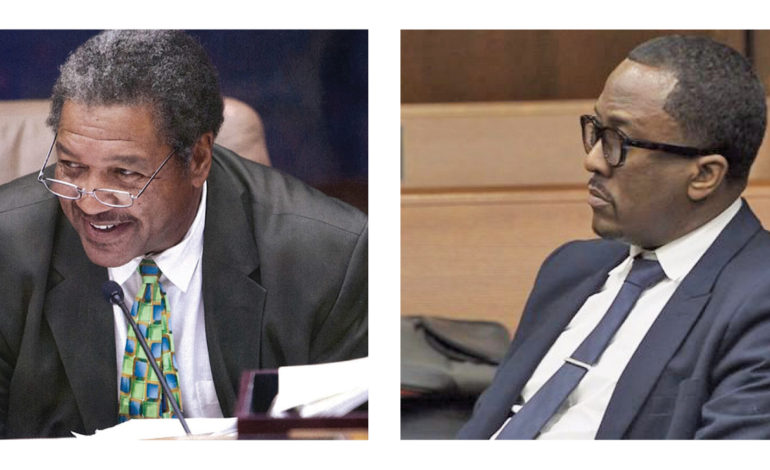 DETROIT— Among the seven Democratic candidates seeking to fill a Detroit-area State Senate seat left open by a term-limited incumbent who pleaded guilty to federal theft and conspiracy charges, two have histories involving crime and controversy.

Former State Sen. Bert Johnson (D-Highland Park) resigned after pleading guilty to conspiring to steal more than $23,000 from taxpayers using a “ghost employee” on his Senate payroll in March and now faces up to 10 years in prison. He promoted his story of having risen to elected office after being convicted of a break-in and armed robbery at the Oakland Hills Country Club in 1993.

Former State. Rep. Brian Banks of Harper Woods had eight felony convictions for writing bad checks and credit card fraud when he was elected to the state House in 2012. He resigned in 2017 after pleading guilty in a bank loan forgery case which resulted in no added jail time.

Former State Rep. George Cushingberry, Jr., a former Detroit City Councilman, had his law license suspended after failing to appear at a hearing on professional misconduct charges. He is also currently the subject of a sexual harassment lawsuit by a former female staffer.

He said on his Facebook page that she “is under the influence of legal pharmaceuticals that severely affects her behavior.”

Detroit political consultant Mario Morrow, Sr. said some candidates are running “because they need a job.”

“Some of these guys have been in politics their entire lives; what else are they going to do?” he said.

“Talk about a field of characters,” Morrow said. “Brian Banks had to resign and then he wants to run yet again? Cushingberry lost his City Council seat and now he’s trying to get elected again? This is all he knows; he was once the youngest lawmaker in Michigan, so he’s been doing this his entire life.”

Among the issues the candidates are discussing are crime, education and Michigan’s high insurance rates.

Abraham Aiyash, a candidate and former member of the Hamtramck Recycling Commission who founded the Halimah Project, an organization that mentors Lansing-area refugee children, said candidates need to steer clear of controversy after Johnson’s guilty plea.

“It’s a low bar, unfortunately, but we need people who won’t be caught in cronyism and scandal,” Aiyash said.