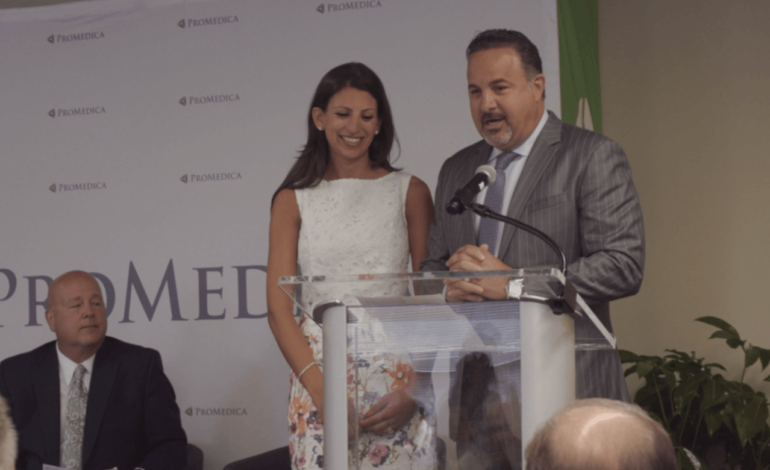 TOLEDO — On Thursday, July 19, a Lebanese American couple invested money in a ProMedica initiative which funds research and programs for education, housing, income and food insecurity.

ProMedica Chief Philanthropy Officer Gary Cates announced the $1.5 million donation by Ramy and Faye Eidi during a news conference Thursday at ProMedica’s Ebeid Institute in the UpTown neighborhood of Toledo. ProMedica has a $10 million fund raising goal for the initiative.

Ramy Eidi is the president and CEO of a real estate investment firm called Eidi Properties in Toledo.

At the Ebeid institute, the Ebeid Neighborhood Promise funds Market on the Green, a full-service grocery store in an area with few food stores. It also helps with jobs, workforce training and cooking classes for families on a budget.

Russell Ebeid was the president and chairman of Guardian Industries in Auburn Hills, Mich. He passed away in July 2017.

In October, ProMedica officials announced a $50 million investment initiative to address social factor that affect health and well-being through research and community development following a $28.5 million donations from Ebeid’s family.

Like Russell Ebeid, Ramy Eidi is the son of Lebanese immigrants.

ProMedica donated its own $11.5 million and the foundation subsequently set a goal of another $10 million to be raised over a 10-year period.

The donation from the Eidi family is the first major amount to push ProMedica closer to its fundraising goal.

The funds will go towards the development of the National Center for Social Determinants Research, to begin a study on the relationship between demographic factors and physical health, as well as programs like job training, financial literacy and nutrition education, which will start in the UpTown neighborhood.

The initiative has also helped to fund the hiring of five financial coaches at the Financial Opportunity Center, which has served more than 1,000 people to date.

Kate Sommerfeld, president of social determinants of health at ProMedica, said data collected at the center shows a significant increase in employment levels, net worth of participants and credit scores.

Sommerfeld added that ProMedica plans to continue to reach out to local business to ask for their support in reaching the $10 million goal.