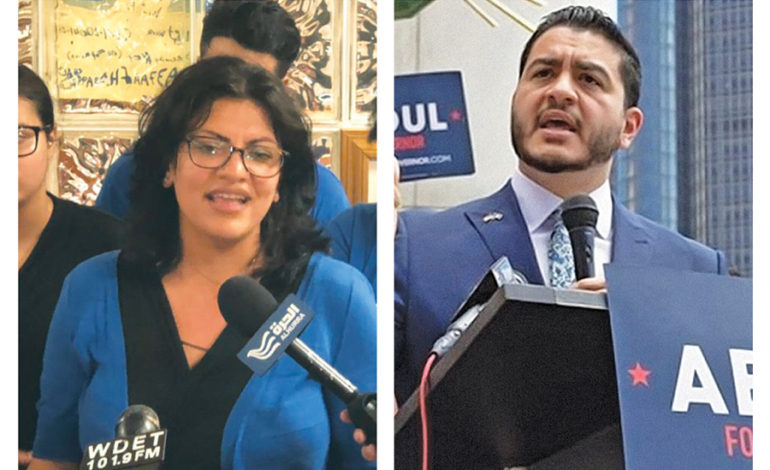 Michigan voters set a new record of involvement this historic primary election thanks in large part to the candidacy of Dr. Abdul El-Sayed, the Progressive Movement led by Senator Bernie Sanders, and in a twisted way thanks to President Trump and his racist rants.

Energy could be felt everywhere in this election. Rashida Tlaib’s amazing victory and the phenomenal campaign which led her all the way to that victory were also unprecedented. Tlaib, the daughter of Palestinian immigrants, never shied away from her roots and the struggle of the Palestinian people. She represents the hopes of the poor and the underserved, in her district and beyond. 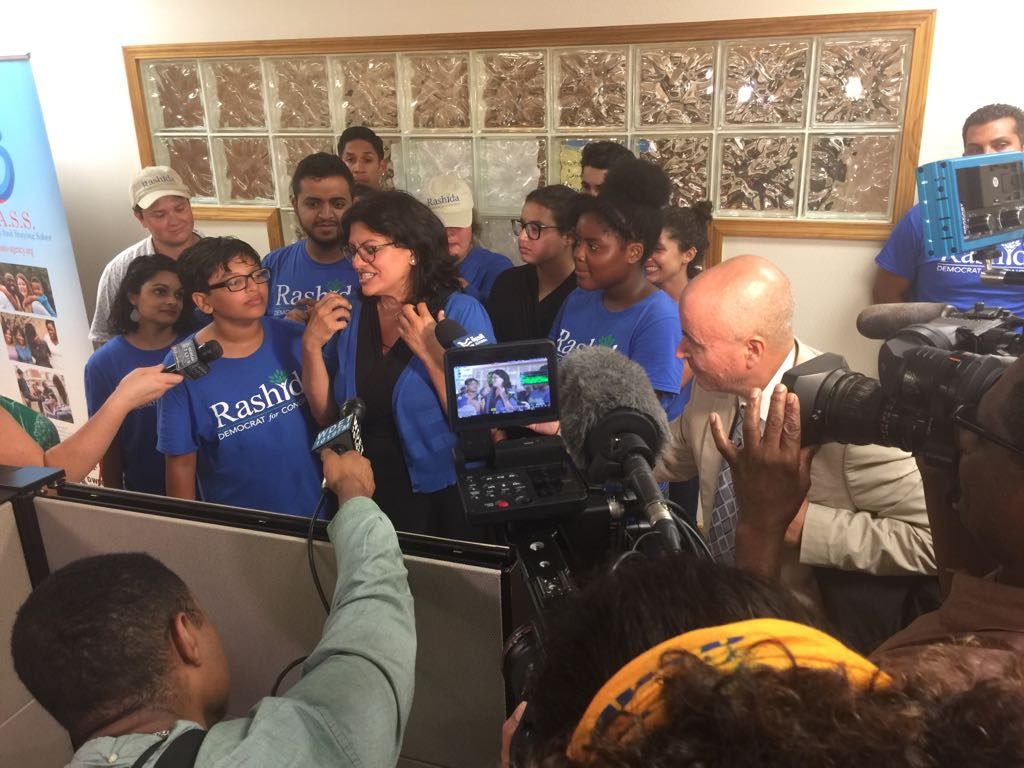 Rashida speaking at her watch party before announcing her victory. Photo by The AANews 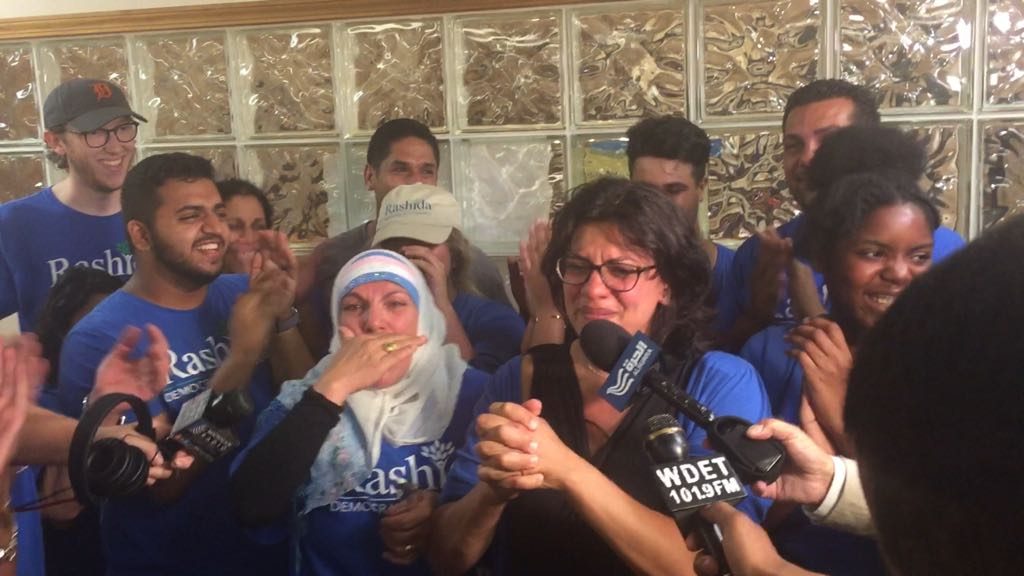 Rashida in tears, surrounded by her supporters and family members as she announces her victory, early Wednesday morning. Photo by The AANews

At her victory party, held in a humble place in a Detroit neighborhood, Tlaib was surrounded by a mosaic of Michiganders from the district she will represent on Capitol Hill.

More striking and telling was her hijabi mother, who wrapped the Palestinian flag around Tlaib with pride and joy in the early hours of Wednesday morning when her daughter’s victory was confirmed.

With tears of joy, Tlaib pointed out her mother, who stood beside her, and addressed her extended family in Palestine.

“I know where I came from and I witnessed the suffering of my people,” she said. “I won’t forget.”

Tlaib’s unrelenting unyielding opposition to Donald Trump and his policies and her unwavering commitment to her constituents in and out of public life are what carried her to victory. On the campaign trail, she never surrendered to the pressure of establishment organizations and their political elites. She is a great example of what the Arab and Muslim communities are capable of offering to public service. On August 7 and in the face of difficult odds, Tlaib pulled off a stunning victory that sent shockwaves beyond her Congressional district and the state of Michigan.

Another young, progressive, Arab American and Muslim woman made an admirable attempt and launched a respectable campaign in another Congressional district, which typically leans Republican, and came close to the finish line. Fayrouz Saad, the daughter of Lebanese immigrants, ran unsuccessfully but impressively in the 11th Congressional District’s Democratic primary a serious, professional and fairly financed campaign headlined with her ethnic background and progressive policies.

While Saad’s campaign is over, her pursuit of public service is not. She will certainly continue her amazing work.

Dr. Abdul El-Sayed was a major player behind this unprecedented participation of Michiganders in this primary election 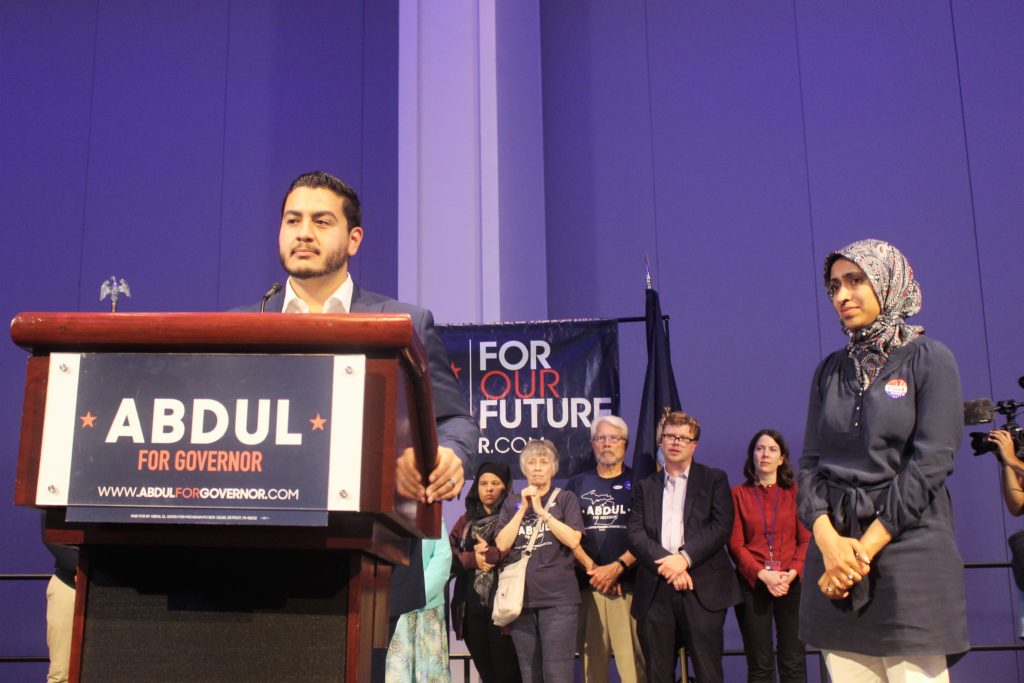 As for Dr. Abdul El-Sayed, he energized the gubernatorial race on both sides of the political spectrum and was a major player behind this unprecedented participation of Michiganders in this primary election.

His opponents and the rank-and-file in the higher political circles of the Republican and Democratic establishments tried relentlessly and desperately to discredit his candidacy shortly after he announced. At some point, they challenged his residency status to get him out of the race. They failed. Then, they attacked his religious beliefs and accused him of being affiliated with the Muslim Brotherhood to discredit his progressive political platform when he became a serious contender.

The Democratic establishment discounted his ability to raise money and assemble a statewide credible campaign. His own former boss, Detroit Mayor Mike Duggan, who tapped him to run Detroit’s Health Department, stood against him and supported one of his opponents.

Another desperate attempt to stop the Abdul movement and distract his campaign was the silliest accusation of all. Some people accused this physician and Rhodes Scholar of not being a real doctor.

Pollsters and political pundits placed the 33-year-old progressive candidate at the bottom of their tallies.

They doubted his ability to raise funds; he raised them. They accused him of being an unrealistic adventurist; he proved them all wrong.

He won almost every debate. He was eloquent and charismatic.

Abdul El-Sayed energized Michiganders all the way to the polls and earned more than 30 percent of the statewide vote (340,560 votes). A very impressive showing for a young Arab American candidate of the Muslim faith in the Trump era.

All of the above and more couldn’t stop the Abdul movement that swept the state in all counties and cities. The results on August 7 were evident and a real proof that Abdul El-Sayed energized Michiganders all the way to the polls. He earned more than 30 percent of the statewide vote (340,560 votes). A very impressive showing for an Arab American candidate of the Muslim faith in the Trump era.

Perhaps El-Sayed’s most important achievement was showing all Americans that religious beliefs shouldn’t be an item of discussion and debate for public servants.

As El-Sayed said, it’s not how you pray, it’s what you pray for; and we all pray for the same things.

Of course, El-Sayed wasn’t the first politician to face backlash because of his faith. As recently as 1960, then-Senator John F. Kennedy encountered both opposition and doubt from some voters in the presidential race because of his Catholic faith. Akin to many of the ludicrous false claims about El-Sayed, some in 1960 falsely claimed that Kennedy would take orders from the pope if elected.

El-Sayed broke the glass ceiling for higher offices for Arabs and Muslims and helped lift his communities’ morale after being besieged by a hateful organized campaign led by the highest office in the land.

The son of an Egyptian immigrant, El-Sayed believed in the American Dream and a democracy by the people and for the people. He fell short of achieving a victory, but accomplished much more than that.

However, as El-Sayed himself said, he stands on the shoulders of many people in our community who worked hard for the last two decades. Arab Americans and American Muslims have been organizing and encouraging political participation for many years.

The work of the Arab American Political Action Committee (AAPAC), which was established in 1998, has paid dividends in municipal, county and statewide races for the last two decades. In fact, some aspects of El-Sayed’s campaign have a familiar ring.  In 2001, then-young attorney Abed Hammoud ran for Dearborn mayor against great odds and against the establishment, but won in the primary on 9/11/2001, a very difficult day, eliminating the well-known former police chief.

Our community has grown and has come a long way since then and Abdul El-Sayed, Rashida Tlaib and Fayrouz Saad should certainly be thanked for taking our political participation to a higher level and building bridges with other communities across our great state.

It is a fact that more Muslims and Arab Americans have entered public service this year, thanks in great part to these young leaders and their ability to deliver a resonating message in an effective way.

It is also a fact that for the first time in recent decades Dearbonites have voted in large numbers in the primary, exceeding the state average. While voters turnout statewide averaged around 28 percent, Dearborn voter participation exceeded 34 percent. Dearborn voted 75 percent Democrat, while less than the remaining 25 percent voted Republican. This is a strong message to Trump and the “Trumpettes” in this state.

Many thanks to the candidates, the voters and the organizations who led the way for years and who contributed to this historic achievement, both locally and across the nation.

The best is yet to come! 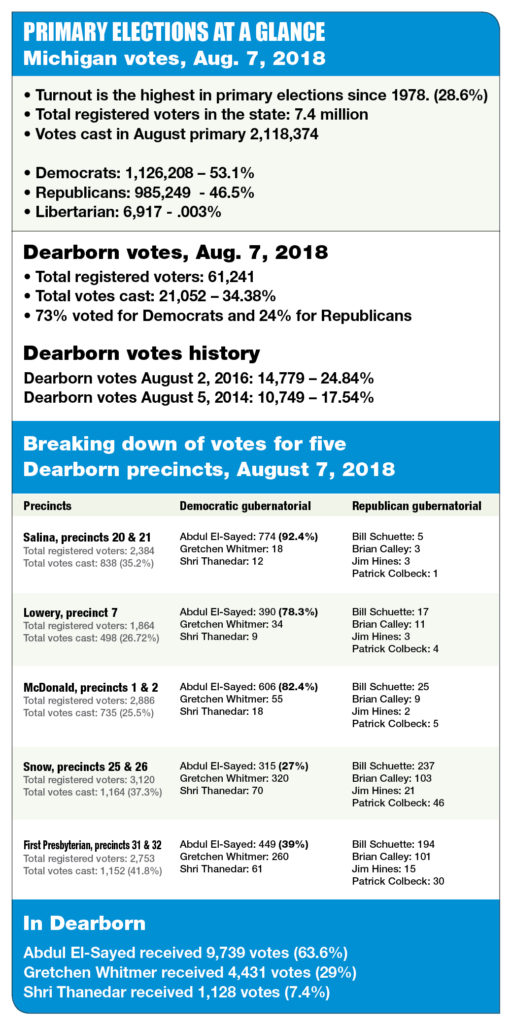 election at a glance