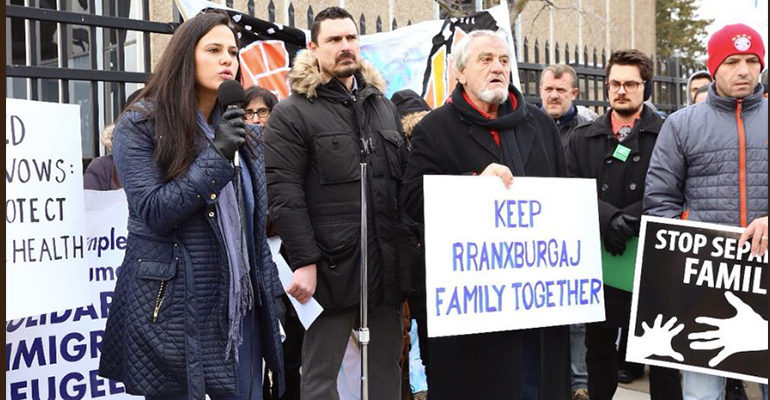 Detroit Supporters of the Rranxburgaj family rally in January outside Central United Methodist Church, where father Ded has been given sanctuary. Photo courtesy of: Facebook, Central Methodist Church

DETROIT — According to press release by Michigan United, two men scheduled to be deported found ways around the orders of removal last week.

An Albanian immigrant named Ded Rranxburgaj, who took sanctuary in a Detroit church, has a federal hearing on Nov. 13.

Francis Anwana, who came from Nigeria for help with hearing and cognitive disabilities, was told at a Friday meeting with Immigration and Customs Enforcement (ICE) that his stay of removal has been accepted. ICE will be reviewing the stay over the next 30 days.

Advocates hope this will be enough time to advance a private bill by Rep. Dan Kildee (D-Flint) that would make Anwana a lawful permanent resident.

Rranxburgaj took sanctuary all year in an apartment in the Central United Methodist church with his wife, Flora, and two sons, Eric and Lorenc.

Lorenc Rranxburgaj is still protected by the Deferred Action for Childhood Arrivals (DACA) program and Eric Rranxburgaj was born in America.

Meanwhile, Ded Rranxburgaj was labeled by ICE as a fugitive for refusing to abandon his family. 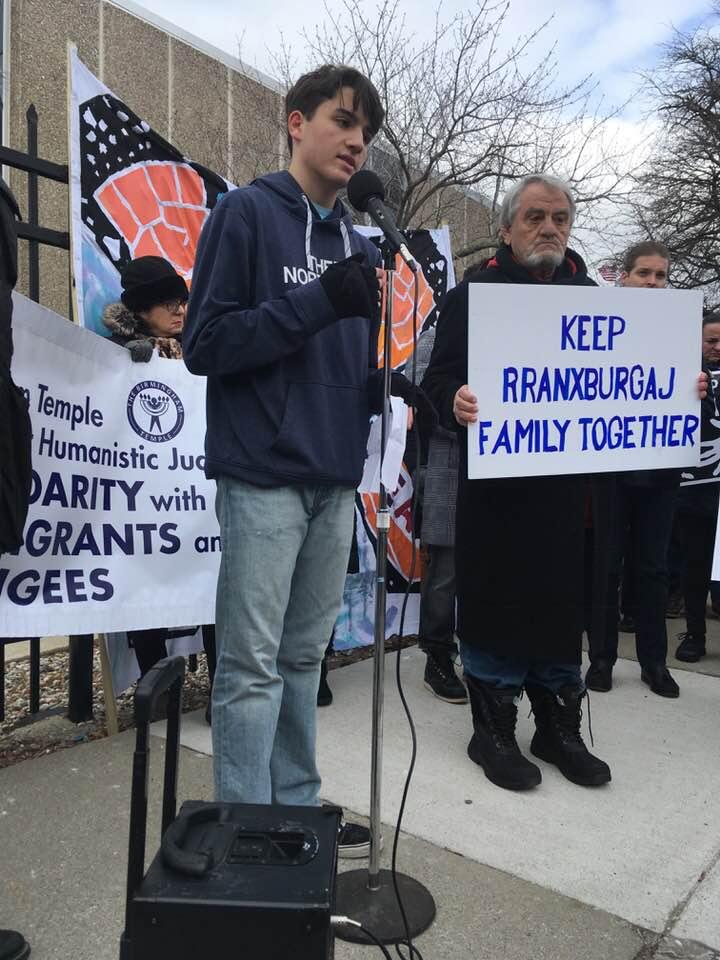 His attorney, George Mann, said in the complaint he filed that this designation is given as a justification for their refusal to adjudicate Ded’s request for a renewal of his deferred action on humanitarian grounds.

“Since we claim that Ded is not a ‘fugitive,’ as per legal precedents,” Mann said, “their refusal to adjudicate our request for a renewal of the deferred action is unjustified.”

Mann continues to negotiate with ICE and hopes an agreement can be reached before the court date.

The team of supporters who rallied around the Rranxburgaj family are encouraging people to attend the hearing before Judge Denise Hood, which will be open to the public and media.

Participants carried signs with the hashtag #KeepFrancisHere, hoping Anwana could stay with loved ones who help him through the challenges of his deafness and cognitive disabilities.

“Family is so much more than sharing a last name; family is about taking care of the most vulnerable because we love them,” said Tania Morris, a staff attorney with Michigan Immigrant Rights Center (MIRC) “When [Francis] came here, he thrived. He flourished. And here, he made a family. Even though he has his family in Nigeria, he’s made a family here.”

MIRC attorneys are also looking to legislative action for a solution. HR 6829, a private bill sponsored by Kildee, would cut through the removal process and offer Anwana lawful permanent residency.

The other person the rally aimed to help was Banny “Papa” Doumbia, a Detroit man from the Ivory Coast who has raised four American-born children since he arrived over 30 years ago.

Although an impromptu sit-in at Detroit Metro airport was able to stop his removal, he is still being held in Chippewa County jai in Sault Ste. Marie, five hours from his family and attorneys.

“The African immigrant community has been traumatized by this administration in unprecedented numbers,” said Doumbia’s daughter, Nabinto, at the rally. “A lot of times we forget Black immigrants. We either think of the conversation of ‘Black Lives Matter’ or ‘separating families’ and we don’t realize that there’s an entire group of people who exist right between those two things.”