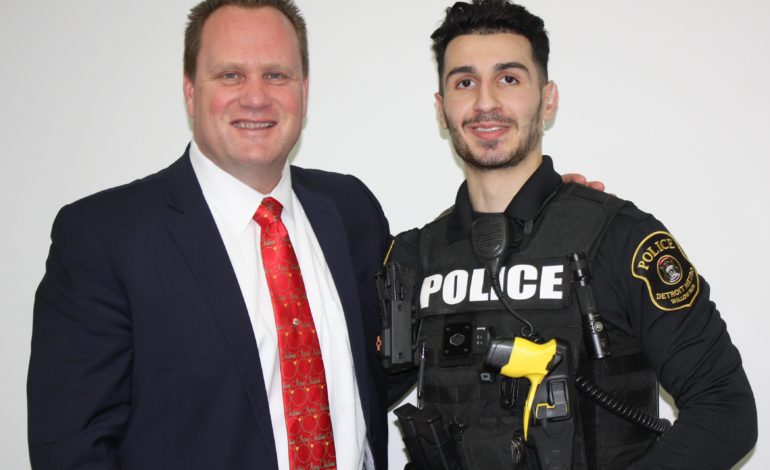 ROMULUS — Metro Airport is a hectic place for anyone, but for non-native English speakers and people from faraway countries, it can be an even more daunting place to navigate.

That’s just part of the reason why it’s so reassuring to see someone who looks like them and speaks the same language, according to airport police fofficer Ahmed Saad.

“My favorite part of the job is the interaction with people; you meet people from all over the world,” Saad said. “Just being there, speaking Arabic and meeting people from my home country of Lebanon, it’s great to be able to make people feel welcome.”

Saad, 22, first began working at the airport in November 2017, bringing his unique skills to the post while adding to what is fast becoming a far more diverse workforce.

“For the longest time the airport was primarily White male,” said Chad Newton, CEO of the Wayne County Airport. “We had a few minorities, but no effort was made to recruit anybody with different ethnic backgrounds.”

He added that the airport simply hired based on who applied and who was qualified.

Since Newton began his initiative in October 2016 to seek more diversity in the airport’s pool of qualified candidates, his team has been able to grow in more ways than they ever realized.

“In 2016 we made a concerted effort to find people who helped us match the community in which we worked,” said Newton, who was then vice president of public safety. “We have a lot of diverse groups in this area and our police department was not a reflection of that.”

The new department hires include officers who speak multiple languages, including Arabic, which has been a “huge asset” according to Newton.

“At one point we had zero people that could communicate” with the thousands of diverse travelers coming in from around the world, he said.

“Now we have three to four people who can understand the issues they’re going through.”

Saad, a longtime Dearborn resident, is one of them. He originally took college classes in business, but found his way back to his true calling as an officer, a rewarding, community-focused job he looks forward to each day.

Originally apprehensive because of scenes of police brutality and Islamophobia he saw in the news and on social media, Saad has fully embraced being a part of the solution rather than being fearful of the problem.

“One thing I believe is if you see a problem, you want to change it, you’ve got to become a part of it,” he said. “I wanted to prove that it’s not what you see on TV; we’re (Arabs and Muslims) not the bad guys. There’s extremists in every religion and in every culture.”

According to Newton, 16 of the airport’s last 21 officer hires have come from a diverse or minority background. He said Caucasian officers have privately told him that the new focus on diversity has been beneficial in countless ways.

“We didn’t exclude anybody and we certainly didn’t lower our standards,” Newton said. “We hired and recruited some of the finest candidates, but we spent more time looking for people who had the highest standards but also helped us with our diversity desire.

The process took time, money and energy, he added, but the results have been worth it.

“The thing I want the readers to know is we believe in order to be diverse you have to act with purpose,” he said. “You can’t say on one hand believe in diversity and inclusion, but on the other hand do nothing to take steps to move in that direction.”

The airport posts job openings on its website www.MetroAirport.com/business.

For Saad, it’s been a dream job so far.

“Just helping people and making a positive impact on people’s lives, it’s not so much what people see on social media, the force, the danger, things like that,” he said. “Just being there for someone to listen to when they have no one to talk to, that’s my favorite part of the job.”