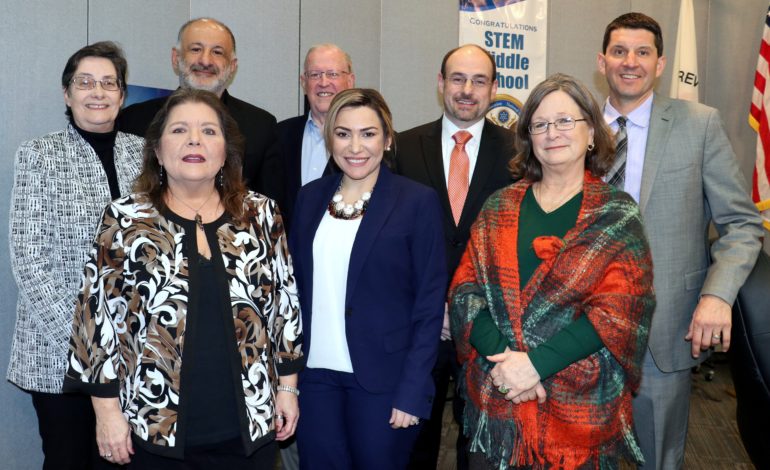 DEARBORN — As part of School Board Recognition Month, Superintendent Glenn Maleyko took time at the January 14 school board meeting to thank the trustees for their service to the community.

The school board trustees dedicate a lot of time sharing their expertise to benefit the students and families in the district.  Maleyko said they are very knowledgeable about the workings of the Dearborn Schools district and the latest issues impacting education.

School board members in Dearborn develop policies and make decisions that help shape the future of instruction in the district. They bear responsibility for the third largest district in Michigan with an annual budget of more than $200 million, an enrollment of 21,000 students and 2,600 employees working in 34 buildings.

With that dual responsibility, they evaluate both the superintendent and college president, attend twice the number of meetings and must keep abreast of issues, laws and legislation impacting both Pre-K to 12 and the college.

The board began the year with a brief organizational meeting to select new officers.  Those appointments include Mary Petlichkoff as president, Hussein Berry as vice president, Fadwa Hammoud as secretary, and Jim Thorpe as treasurer.

There are seven Dearborn Public Schools trustees for 2019.

Trustee Mary Lane was first elected to the board in November 1999, but did not serve in 2008.  She has 17 years of board experience and her current term expires in 2022.

Trustee Hussein Berry has served on the board for seven years.  He initially served from 2010 to 2014 and was elected again in November 2016 to a term which lasts through 2022.

Fadwa Hammoud was appointed to the board in July 2015 and elected in November 2016 to a term that expires in 2022.  She has served on the board three and a half years.

Trustee Michael Meade was elected in November 2014 and has four years of board experience.  His current term expires in 2020.

Trustee Mary Petlichkoff has served on the board eight years.  She was first elected in 2006 and served from 2007 to 2010. She returned to the board after being elected again in November 2014.  Her current term expires in 2020.

The Dearborn Board of Education, and the hundreds like it across the state, work to ensure that decisions on school programming are made by people elected to represent the community’s values, culture and circumstances.  They are citizens whose decisions affect students and build the local community.