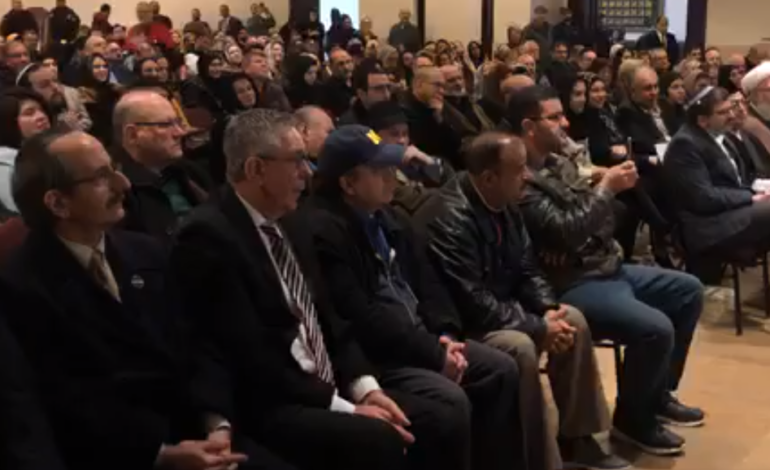 Hundreds of people packed the Islamic Center of America for the event.

DEARBORN — Several hundred people packed the Islamic Center of America here on Sunday, coming together in a show of unity, condemnation and defiance of the growing threat of terrorism and mass killings worldwide.

The death toll in this past Friday’s terrorist attack on two mosques in Christchurch, New Zealand has risen to 50, leaving many in immigrant, Muslim, and other communities feeling threatened worldwide.

Such gatherings have become commonplace in a community where diversity is as strong as anywhere in the country, but that hasn’t made it any easier according to several leaders who spoke at the event.

Many, including U.S. Rep. Rashida Tlaib (D-Detroit), expressed their frustration and weariness at having to continually speak out and condemn such heinous and senseless acts.

In an emotional speech, Tlaib took President Trump to task for refusing to condemn the growing threat of white nationalism and extremism in America, and spoke of her own history.

“Growing up in predominantly black community in Detroit I felt so safe,” she said. “But what about people who didn’t grow up in communities like ours, surrounded by people who we know will take care of us?

Tlaib, who has spoken out against Trump on numerous occasions and has been criticized by extremist elements for it, said she feels a similar climate of disdain on Capitol Hill because of her status as a Palestinian American Muslim woman.

She said she worries about her son and whether he can feel safe praying in a mosque, and told the audience she received a death threat three days ago.

“This is not the America I grew up in,” she added.

The event, titled “Standing Together Against Hate and Terror,” brought together members of the Muslim, Christian, Jewish and other local communities, as well as law enforcement officials including Michigan Attorney General Dana Nessel, who received high praise for creating the state’s new Hate Crimes Unit earlier this month.

“A dark cloud has risen over our nation in recent years of bigotry, hatred and intolerance,” Nessel said. “Since 2016 there has been an exponential rise in hate crimes in America and unfortunately here in Michigan.

“Who will protect us and keep us safe? Let me tell you right now, the Department of the Michigan Attorney General, together we will stand up against hate, intolerance and violence, we will not lie down, we will fight back, resist and conquer hate by working together.”

Nessel also introduced the nation’s first Muslim American female solicitor general Fadwa Hammoud as a “fierce advocate” on behalf of the Muslim community and all communities in the state.

Hammoud spoke out against the current administration’s rhetoric that immigrants should be seen as “invaders,” and referenced prior speakers Abdullah Hammoud and Osama Siblani.

“Like you Abdullah and Osama, I’m sick and tired of attending vigils for massacres committed by extremists,” she said.

“Military style weapons do not belong in civilian hands, how many more times do we have to be here, I ask myself.”

Abdullah Hammoud, a 29-year-old state rep. from Michigan’s 15th district, said he received a call from Fadwa Hammoud expressing anger over the direction of society and the growing threat of extremism.

“Today we send our condolences, thoughts and prayers not only to Christchurch but also to victims of terror wherever they may be,” he said.

He also took the opportunity to speak out against the seemingly never-ending cycle of violence and condemnations that has arisen because of terrorist attacks, including past attacks by extremists who call themselves Muslims.

“Frankly I am tired, I’m tired of being called on to condemn acts of terror that have nothing to do with our faith,” he said, expressing his aspirations to ban semi-automatic weapons to applause from the audience.

“We are tired of needing to justify our identities in order to prove our Americanness, tired of watching children grow up never being welcomed in the lands they were born.”

Numerous speakers stressed the importance of security, safety, and unity moving forward, and urged people to speak out if they hear of any potential threats or notice any suspicious behavior moving forward in these tense times.

Lawrence shared a personal story of watching TV coverage of attacks on African Americans in the south with her grandmother, who encouraged her to stay strong, keep moving forward and to forgive others.

“We stand here today because of something that happened miles and miles away from home, and jabbed us in our gut,” she said about the Christchurch attacks.

“We cannot give up….We are still standing, that we have the courage to gather here today is a call to action.”

“We are not going away,” Siblani said. “No matter how many of us you kill, we are going to come back on Friday in large numbers to the mosques.”

Seventeen-year-old Hassan also spoke, encapsulating the danger he feels as a marginalized and oppressed student in these difficult times.

“It worries me, my parents see me off every morning, wondering if my school will be the next backdrop (for an attack),” he said.

“I hope for the future we don’t forget those who have had their lives stolen from them…This is a challenge to the group I know best, the youth.”