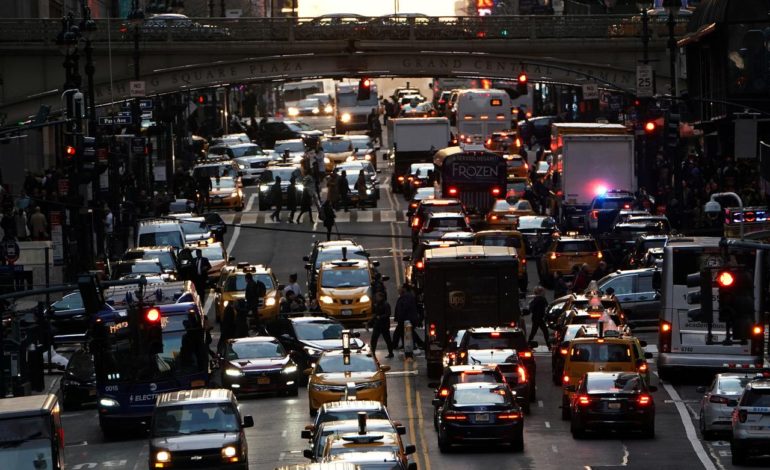 Traffic is pictured at twilight along 42nd Street in the Manhattan borough of New York, U.S., March 27. REUTERS/file photo

American middle class consumers are enjoying the strongest wage growth in a decade, but higher gasoline prices are eating a good chunk of that increase for many, and it looks like pump prices are headed higher.

Gasoline pump prices have already jumped about 25 percent this year, the fastest rate in three years. Trump administration sanctions against Iranian crude oil exports had something to do with that and this week’s move to tighten sanctions could soon send prices even higher.

Crude oil prices hit their highest in about six months on Tuesday. Some analysts expect the national average pump price, currently near $2.85 per gallon, will climb above $3 per gallon for the first time since 2014. Few goods prices aggravate U.S. consumers as much as high gasoline prices.

“It’s an important part of consumers’ psyche,” Mark Zandi, chief economist at Moody’s Analytics, said of a further rise in energy prices. “They live with it every day.” 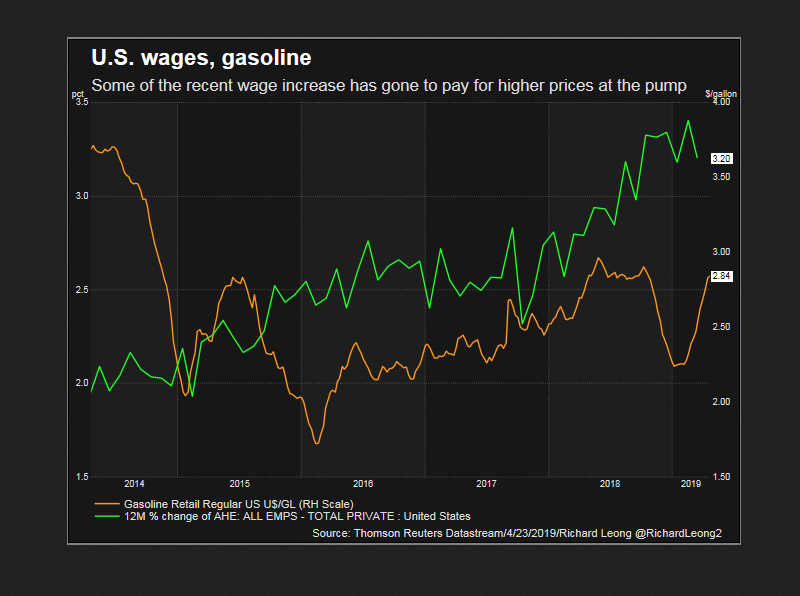 Zandi and other analysts said higher gasoline prices would irritate U.S. motorists heading into the summer driving season, but they don’t think a moderate fuel price hike would force people to cut spending in other areas. For now, consumer spending has remained resilient, with wages growing in a tight job market. Average hourly earnings in the private sector are rising at roughly 3.2 percent year after year, the strongest in a decade.

Those bigger paychecks helped pay for costlier gasoline after the Organization of the Petroleum Exporting Countries (OPEC) and allied producers, including Russia, reduced output to prop up prices. Retail prices for regular gasoline have risen around 55¢ per gallon so far this year from $2.30 at end of 2018, according to AAA, an automotive advocacy group.

Analysts noted that U.S. domestic crude production is surging and said higher output from OPEC and Russia could help offset losing about 1 million barrels per day of Iranian oil from world markets. But sources said on Tuesday that Gulf OPEC members were ready to raise output only if they saw sufficient demand.

Some U.S. consumers are already paying $3 per gallon at the pump and will feel the squeeze if prices rise further. In February, filling a 25.5 gallon tank of a sports utility vehicle with regular gasoline would have cost around $57 on average. That has risen to nearly $73, based on government data. For a $15-an-hour employee working 35 hours a week, filling up once a week now costs 14 percent of gross pay, up from less than 11 percent just 10 weeks ago.  Even before the latest Iran news, drivers expected rising prices at the pump to cut their income. A survey in March showed consumers expected prices to rise 4.7 percent over the next year, the largest figure in nine months, according to the Federal Reserve Bank of New York. The consumers surveyed expected their wages to rise 2.6 percent over the year, though earnings growth expectations slipped for people with a high school diploma or less education.