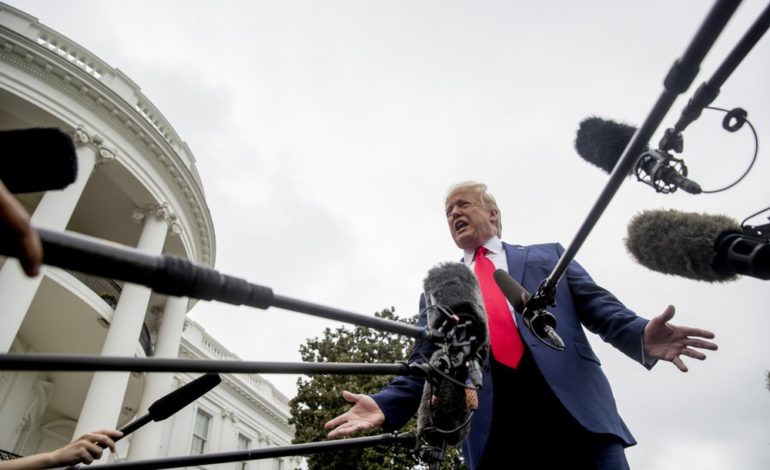 President Trump speaks to the media on the South Lawn of the White House in Washington, Thursday, Oct 3, before boarding Marine One for a short trip to Andrews Air Force Base, MD, and then on to Florida. (AP Photo/Andrew Harnik)

WASHINGTON (AP) — On Thursday, President Trump publicly encouraged China to investigate Democratic political rival Joe Biden, snubbing his nose at an impeachment inquiry into whether a similar, private appeal to another foreign government violated his oath of office.

Trump declared at the White House, “China should start an investigation into the Bidens.” He said he hadn’t previously asked Chinese President Xi Jinping to investigate the former vice president and his son Hunter, but it’s, “certainly something we could start thinking about.”

By publicly egging on China, Trump was amplifying the message he’d delivered in private to the president of Ukraine. That message, revealed by a government whistleblower, has spawned the impeachment investigation by the House.

Trump, who has defended his contact with Ukraine as “perfect”, went further in expanding his request to China, a communist world power that has much at stake in its relationship with the United States in an ongoing trade war.

The boldness of Trump’s call Thursday also suggests he will continue to act as though requests for other countries to investigate potential opponents in the 2020 election are normal, even in the face of broad condemnation from Democrats and some Republicans. It’s a tactic Trump has used successfully before, pushing questionable secret conversations into the open, helping to inoculate him against charges that he is engaged in nefarious action, cover-ups or obstruction of justice.

Vice President Pence stepped in to defend Trump on Thursday, saying Americans have a right to know about the wrongdoing the president alleges, despite no evidence to support wrongdoing by Biden, a top contender for the 2020 Democratic nomination.

Trump’s appeal to China evoked his public call in 2016 for Russia to track down his then-rival Hillary Clinton’s emails — a move that was seen as an unprecedented appeal for foreign election interference. It is a violation of federal campaign finance law to solicit anything of value from a foreign government to help a campaign.

In the case of both Ukraine and China, Trump has made his allegations against Biden without evidence of any wrongdoing.

The president and his personal lawyer, Rudy Giuliani, have for days been raising suspicions about Hunter Biden’s business dealings in China, leaning heavily on the writings of conservative author Peter Schweizer. On Monday, Geng Shuang, a spokesman for China’s Ministry of Foreign Affairs, called the allegation that Chinese government business gave Biden’s son $1.5 billion “totally groundless.”

Trump’s unprompted reference to China Thursday came moments after he was asked about trade negotiations with the country.

“I have a lot of options on China,” Trump said. “But if they don’t do what we want, we have tremendous, tremendous power.”

He later alleged without evidence that China had a “sweetheart deal” on trade with the U.S. because of the Bidens.

Speaking to reporters in Arizona, Pence, whose aides had previously tried to distance him from the impeachment drama, echoed Trump’s call for investigation of the Bidens.

“The American people have a right to know if the vice president of the United States or his family profited from his position as vice president during the last administration,” he said.

Trump’s requests for Ukrainian President Volodymyr Zelenskiy to investigate the Bidens, as well as Giuliani’s conduct, are at the center of an intelligence community whistleblower’s complaint that sparked the House Democratic impeachment inquiry last week.