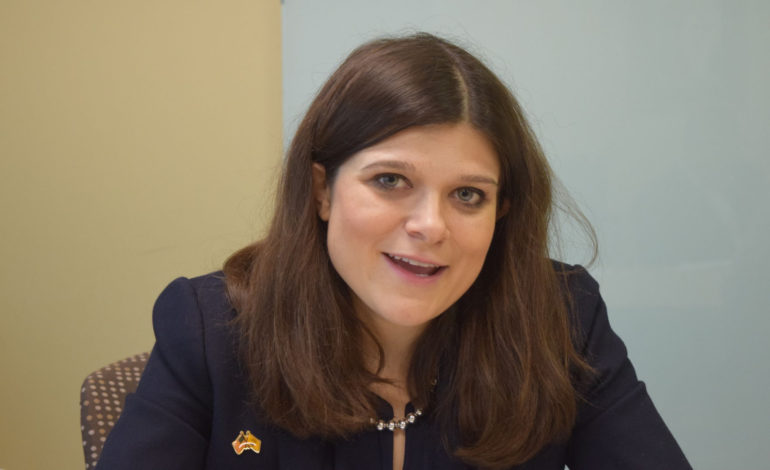 This week, four members of the United States House of Representatives sent a letter to the United Nations Secretary-General expressing their “concern about the continuing, serious violations of United Nations Security Council Resolution 1701 and the resulting threat our ally Israel faces on its northern border.”

Resolution 1701 led to the ceasefire of the 2006 Lebanon-Israel war, a month-long conflict that resulted in deaths of almost 1,200 Lebanese civilians at the hands of the Israeli military. We might also remember that the 2006 episode was a matter of Israel invading Lebanon, not the other way around.

Despite these facts, the letter urged the United Nations solely to “limit Hezbollah’s capabilities” in the south of Lebanon. The four authors of the correspondence are Lee Zeldin of New York, Michael Waltz of Florida, Elaine Luria of Virginia and Haley Stevens of Michigan, whose district includes Livonia, Plymouth, Troy, Canton, and Northville, home to thousands of Arab Americans and Muslims.

Haley Stevens won election in 2018 as part of the Democratic wave that took over the U.S. House of Representatives. In the letter that bears her name, the authors label Hezbollah “murderous” and Iran as “the world’s leading state sponsor of terrorism.” She and her colleagues continue, “Israel faces a growing threat from Hezbollah’s missile arsenal. No country can tolerate a terrorist organization on its border acquiring the capability to endanger its population. Israel has the right to defend itself and will have the full bipartisan support of the United States if it must act to protect its citizens.”

The letter includes more anti-Arab smears. “We fear significant civilian costs in Lebanon if Israel must act to defend its citizens because Hezbollah has positioned its massive arsenal in civilian areas – turning much of Lebanon’s population into human shields. Hezbollah will bear the responsibility for that.” Here, Stevens inserts the racist stereotype, invoked over the years against Palestinians and Lebanese alike, that Arabs devalue their own lives. She also preemptively blames the victims for their impending deaths. These images and words have been employed by AIPAC, the American Israel Public Affairs Committee, repeated over the years to justify Israeli repeated invasion, land theft and mass murder.

Stevens mentions the Hezbollah arsenal of 150,000 rockets that could reach Israel, but ignores the fact that Israel has the military might to destroy the entire country of Lebanon in few hours not to mention Israel’s undeclared nuclear warheads that number in the hundreds. Israel had invaded Lebanon several times and killed unarmed civilians and destroyed their homes, long before Hezbollah emerged as a strong resistance defending Lebanon’s sovereignty, infrastructure and its citizens.

Recently, Israel sent its drones over the heavily populated area in the suburbs of Beirut. Israel continues to violate Lebanon’s airspace on a daily basis, there by violating the U.N. Resolution 1701 that ended the 33 days of hostilities with Lebanon in July of 2006.

Contrast Stevens’ actions this week with those of U.S. Rep. Andy Levin, also of Metro Detroit. Levin recently tweeted about a trip to the southern West Bank where he witnessed the horrors of the Israeli occupation firsthand. He described visiting Susya, where he noted that the Israeli government was denying water access to the Palestinian village while building pipelines for a Jewish-only illegal Israeli outpost nearby. “As angry as the situation made me, the resilience of the Palestinian villagers left an even stronger impression,” Levin wrote.

This is the kind of truth that must be spoken by our elected representatives, instead of the tired and racist talking points laid out by Stevens.

Political action groups and activists in Michigan have routinely invited Haley Stevens to their events, even occasionally celebrating her. The time for that to stop is now. This summer, Stevens voted for a bill denouncing the BDS movement. In September, Stevens called her AIPAC-sponsored trip to Israel “phenomenal.” According to the Detroit Metro Times, in her very short congressional career, Stevens has received $34,062 from pro-Israel lobbies. With this latest move, the Michigan congresswoman has made it quite clear that she is little more than a reliable soldier for the Zionist lobby.

Haley Stevens must hear from you now and next year in November. Call U.S. Rep. Haley Stevens and tell her that she should be working for Michiganders and not for her Israeli sponsors: Her number is: 734-853-3040 or email her at: Haley.Stevens@mail.house.gov or her Chief of Staff Justin German: Justin.German@mail.house.gov