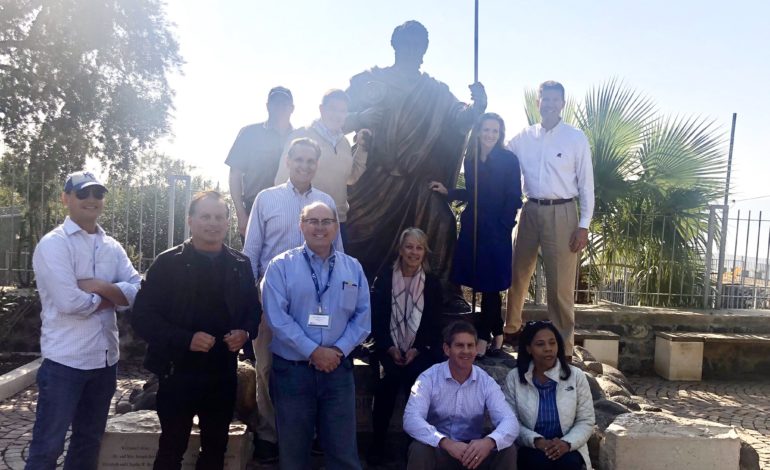 Michigan Secretary of State Jocelyn Benson and a bipartisan delegation at the Northern Israeli border during a visit to learn about "cybersecurity policies and practices to better protect election administration."

This week, another prominent member of the Michigan government, Secretary of State Jocelyn Benson, a Democrat and public figure who has shown support for the Arab American community, with the community reciprocating that support, took a publicized trip to Israel. After the outrage sparked by last month’s Israeli trip by Governor Whitmer to secure trade ties with Israeli businesses, it should seem clear that Arab Americans have requested they be consulted in matters concerning Israel and Palestine as they relate to our local government.

Perhaps the message was not made clear enough. This week, Benson joined a delegation of secretaries of state from across the country to meet with cyber security experts. She happily took to social media to announce that trip would help visiting officials understand how Israel secures itself from its enemies in the region and gain knowledge that would help Americans “secure our elections from foreign interference.”

The statement is almost too much to unpack. Besides its obvious link to a Democratic talking point that they have carried all the way to impeachment, the statement is ripe with hypocrisy, arrogance and irony. The fact that Benson would turn to a nation whose history of surveillance and cyber espionage, including spying on us, our leaders and the White House, has landed it in courts with technology companies such as Facebook and WhatsApp should confound those residents of Michigan whose rights she claims to secure.

The fact that Democrats would talk about foreign interference while routinely forcing regime changes all across the world shows their allegiance to American global power. This much is reflected in the party’s unwavering support of a defense bill that will ensure destruction of Yemen at the hands of Saudi Arabia and its allies, give President Trump carte blanche to go to war with Iran and even let him build his wall.

These events should prove to us that our politicians are completely capable of actions that contradict their words. Perhaps then we should not be surprised when another one of our “friends” in Lansing decides to take a trip to the biggest occupying force in the region in hopes of furthering strengthening the U.S.’ relations with Israel. The real question should be, “why do we as a community, with increasingly influential presence in the ballot box, allow this to happen?”

The next time our community is invited to a dinner or photo opportunity with an elected official and so-called friend of Arab Americans, will we run, stumbling over each other, to accept the invitation? Or will we stand strong against America’s skewed foreign policy and in defense of innocent Palestinians, who as we speak are backed into isolated corners in their own land, waiting for the next catastrophe to occur? Will we stand in solidarity with Palestinian families and say that Palestinian rights are human rights and that by denying rights to Palestinians, the state of Israel is actively violating human rights?

Or will we join yet another luncheon where elected leaders will gain our trust, along with our money and vote, only to shatter it months down the line?

If we don’t demand respect, we will never get it. It’s politics, after all.