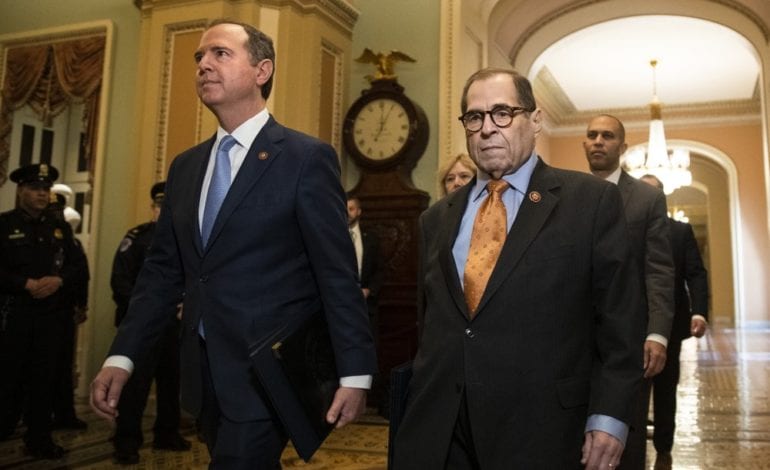 WASHINGTON, D.C.— House Democrats set the stage for the impeachment trial of President Trump, only the third trial of its kind in U.S. history, as they carried articles of impeachment to the Senate chambers in a hand-off which takes impeachment proceedings from the Democratic-run House to the Republican-majority Senate.

The senate trial is poised to be a partisan affair, with Trump’s backers aiming for swift dismissal of  the charges and Trump himself looking for vindication before the nation decides whether he will be picked for another term in the November election. Trump’s political campaign reportedly dismissed the House effort as “just a failed attempt to politically damage President Trump leading up to his reelection.” 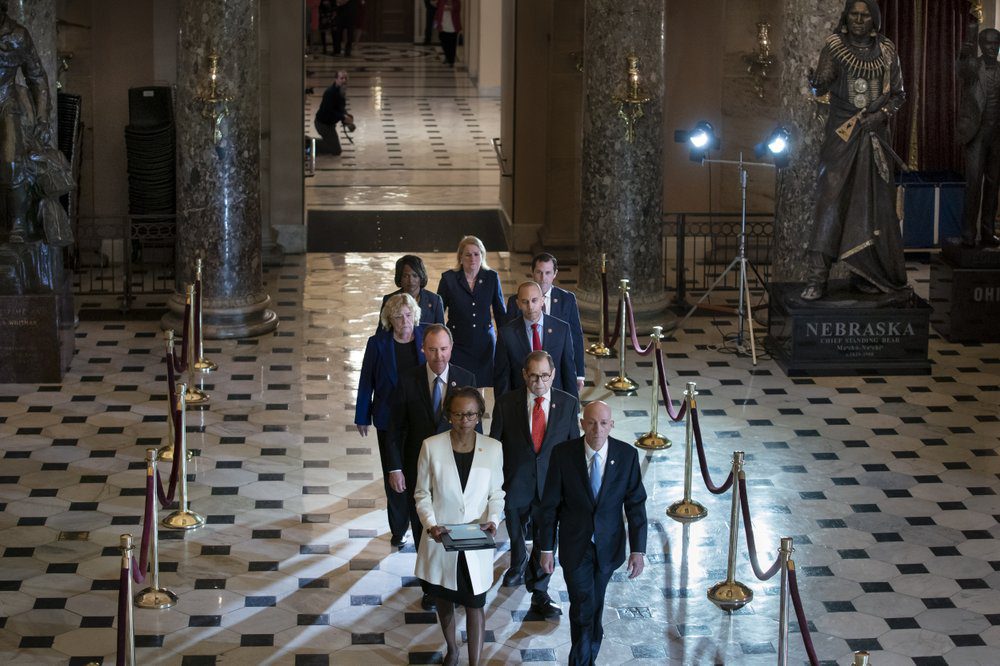 House impeachment managers walk to the Senate to deliver articles of impeachment on Wednesday.

Senate Majority Leader Mitch McConnell (R-KY) pledged to have the Senate “rise above the petty factionalism” and “factional fervor and serve the long-term, best interests of our nation″ and called it a difficult time for the country.

Earlier on Wednesday, House Democrats voted along party lines to finally deliver the articles to the Senate to begin the trial. They accuse the president of undermining U.S. foreign policy on Russia and Ukraine by pressuring Ukraine to dig up dirt on his political rival, former Vice President Joe Biden. Trump is also charged with obstructing the probe into his dealings with that country.

Senior administration officials have said the president’s team expects the trial to last merely a week, far shorter than the 1999 trial of Bill Clinton or the 1868 trail of Andrew Johnson. Others on Capitol Hill find that expectation to be too optimistic.

On Wednesday, in a tradition usually reserved for more celebratory occasions, House Speaker Nancy Pelosi (D-CA) gave away impeachment pens one by one to chairmen and impeachment managers after signing bits of her name with each. Later, White House Press Secretary Stephanie Grisham seemed taken aback by how “somber” Pelosi seemed to be as she solidified the possibility of an impeachment trial in the Senate. 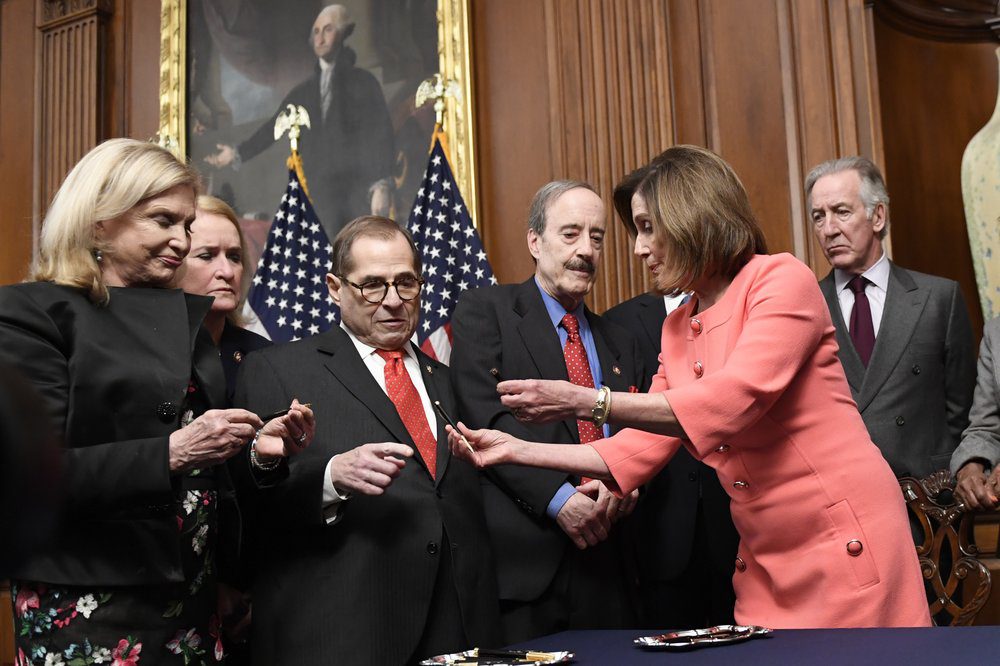 House Speaker Nancy Pelosi hands out pens after she signs a resolution to transmit the two article of impeachment to the Senate on Wednesday.

“Nancy Pelosi’s souvenir pens served up on silver platters to sign the sham articles of impeachment,” Grisham tweeted. “She was so somber as she gave them away to people like prizes.”

A somber ceremony in the Senate

On Thursday, the Senate was transformed into an impeachment court in a somber ceremony with senators standing at their desks to swear an oath of “impartial justice” as jurors with Chief Justice John Roberts presiding over the proceedings and House prosecutors formally reciting the charges against Trump. 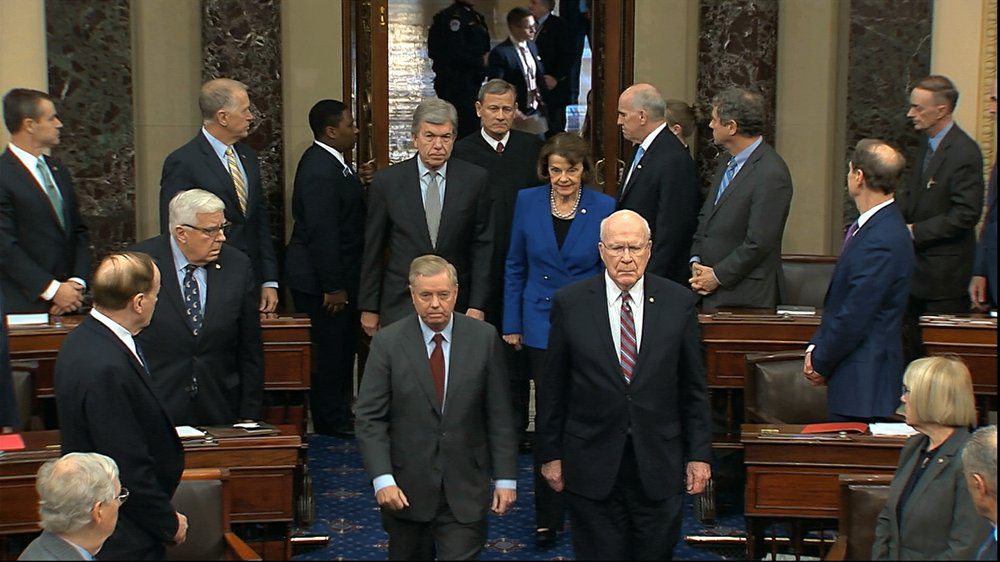 As the U.S. Constitution requires the chief justice to serve as the presiding officer during such a trial, Roberts will fill the roll of a referee for the proceedings. As the seven lawmakers from the House entered the chamber, walking across the Capitol for a second day, Schiff occupied a lectern in the well of the chamber. Senators remarked on the solemnity of the occasion, with Republican John Cornyn of Texas saying, “I thought this is a historic moment, and you could have heard a pin drop.”

The Senate will issue a formal summons to the White House to appear. The president’s legal team is expected to respond by Saturday with opening arguments beginning on Tuesday, after the Martin Luther King Day federal holiday on Monday.

How an impeachment trial works

It would take a super-majority of senators, 67 of the 100, to convict the president. As Republicans control the chamber 53-47, it will take just 51 votes during the trial to approve rules, call witnesses or dismiss the charges, leaving four senators to force an outcome.

The trial will include senators, congressional lawmakers and lawyers for Trump, who may himself appear to answer to the charges. The chief justice will rule on all questions of evidence, meaning he could in theory let House representatives call chosen witnesses and introduce evidence. The chief justice’s rulings can be overruled by a majority of senators. The rules also give the chief justice the option of letting senate the decide on the questions or let the senate decide on certain ground rules before the trial begins. Though the proceedings will be mostly public, the senate may deliberate on final votes behind closed doors.

Senate may be divided over including witness testimonies

Ahead of Wednesday’s session, Schiff released new records from an associate of Trump lawyer Rudy Giuliani named Lev Parnas. The records relate to the Ukraine strategy, including an exchange with another man about surveilling later-fired Ambassador Marie Yovanovitch.

Schiff said the new evidence should bring more pressure on McConnell, who is reluctant to allow witnesses to testify and prefers swift acquittal. The White House has instructed officials not to comply with House subpoenas for testimony and documents. As of now, McConnell faces challenges from certain Republican senators, such as Mitt Romney of Utah and Susan Collins of Maine, who side with Democrats on the need to hear testimony from witnesses.

Former National Security Adviser John Bolton previously raised alarms about the alternative foreign policy toward Ukraine being run by Giuliani. Romney has said he wants to hear from Bolton regarding this information. Others have called for the testimony of Biden’s son Hunter, who served on the board of a gas company in Ukraine while his father was vice president.

Even with his preference for a swift trial without witness testimony that may bring further damning information to light, McConnell will have to balance leveraging political attacks against Democrats and letting senators who want at least the appearance of a fair trial listen to testimony.