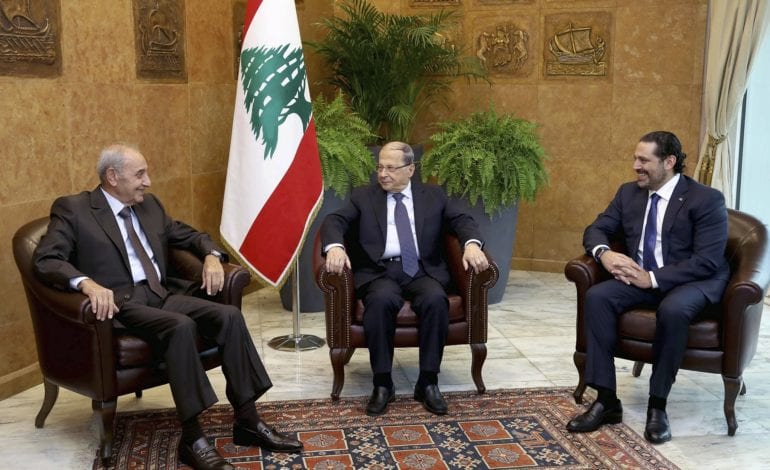 How did Lebanon end up on the brink of financial collapse? A country that many have called in the past the Switzerland of the Middle East and the birthplace of Khalil Gibran and Kamel Al-Sabbah.

With the third largest shipping company (CMA-CGM) in the world belonging to a Lebanese family, the country benefits from one of the richest diasporas in the world.  Names such as Slim, Safra, Mikati and Hariri are just a few. Forbes Middle-East states that “while 2019 was a “difficult” year for the world’s super-rich, it was particularly favorable for some Lebanese billionaires”, eight of the 42 billionaires listed are Lebanese, making Lebanon the most billionaire country in the Arab world by its size.

How has this country reached the abyss of poverty where citizens unable to provide food or pay for their children’s schooling commit suicide, setting themselves on fire?

How has Lebanon, with its rich historical cultural institutions, including one of the best American universities, some of the best doctors in the world and the most successful entrepreneurs on the planet, failed?

A country that has received more international assistance than any other country in the region. Since 1970, Western countries, Saudi Arabia, Kuwait and Iran have been providing humanitarian, reconstruction or development assistance. United Nations agencies have also made significant and sustained contributions, particularly after wars and refugee crises. The Organization for Economic Co-operation and Development (OECD) and the Office for the Coordination of Humanitarian Affairs (OCHA) provide staggering data, pointing out that most aid is still not registered as it has been, for various reasons, before and since 2006.

To give meaning to the events in Lebanon, it is enough to follow the story of the garbage that brought the demonstrators to the streets against corruption and government dysfunctions. But history is rooted in what could have been one of Lebanon’s greatest assets: Confessionalism!  In the heart of a troubled region, disrupted by international interests, Lebanon has long suffered from power sharing between sectarian and religious groups. In its glorious era, Lebanon will be plagued by corruption, nepotism and feudalism leading to a devastating sectarian civil war.

The Lebanese civil war ended with an agreement in Ta’if, Saudi Arabia, approved by the Lebanese Parliament in 1989.  This agreement should have been nothing more than a transition to the construction of a viable state to the inspirations of its citizens.  But rather, the Ta’if agreement created and aggravated the coming crisis, creating an unfair sharing of power, mandating warlords and allowing them to stifle their own confessions. They have deprived their regions and built financial empires on their behalf. Ta’if in this sense has been a “Fletcher Memorial Home” (Pink Floyd, The Final Cut, 1983).

Thirty years later, did they expect their peoples to treat them with any respect?

A Lebanese banker and former government minister stated in 1983 (NY Times, Thomas L. Friedman, October 2, 1983) that “if Lebanon were a company, one could say that it was facing bankruptcy and that its board of directors should be dismissed.  Instead, we are asking the same commission that brought down the country to save it.”

The Ta’if agreement allowed warlords of all faiths to deepen the division and create Bantustans that they could control with their financial share of the state.  In the name of their faiths, they have been allowed with impunity to marginalize their people and allow their families to enrich themselves through corruption and unlimited bribes.  There is no institution in Lebanon that can function freely without the sectarian threat of warlords.  Employment, education, aid and health care are complacently distributed by warlords to their groups and supporters.

These warlords favored an extremely wealthy diaspora that allowed them to build powerful political parties to benefit their families as well as privileged members of their faith. It is subject to the bribes that the diaspora cultivates in fear, apprehension and obsession the protection, favoritism and corruption of the “elected.”  It is quite simply a feudal system that existed in Europe between the 10th and 12th centuries, the state is non-existent or simply shared by these warlords.

Thirty years after Ta’if, the Lebanese have expressed their intention to gradually eliminate bigotry and regain control of their future without the 1992 political class, and they have proved after more than 50 days of demonstrations that they are ready to go through with their demands: The fall of the government and the departure of these warlords.

The Lebanese are all united in demanding the dismissal of the entire political class of 1992. These politicians, blinded in their roles as warlords, do not understand that the new generations will not build their future under their corrupt control. The people have been subjected to the worst conditions in more than three decades, while some have been building financial empires at the expense of state coffers. Corruption at all levels has surpassed public understanding and more than two generations have been traumatized by it. But the millennial generation of WhatsApp, inspired by a global revolt movement, dreams of a state of rights, justice and equality.

This generation, which has not been traumatized by religious conflicts, suddenly discovers a popular desire to put an end to sectarianism and religious political parties.  Suddenly, Lebanese of all faiths have united against the warlords and the political class of 1992, as a call for the end of the Ta’if agreements.

To seriously eliminate all the corrupt parties (majority and opposition) that have ruined the country, a third choice is necessary to gradually remove them from power. The way forward is to create the alternative: another choice of political representation outside the political parties familiar to warlords.

The alternative must be put in place to allow for a transition towards the end of sectarianism. For each faith group, the alternative should allow voters to elect independent representatives who are part of the popular movement.  In a way, it is the responsibility of each faith group to regain the electoral vote from its share of power as defined in the Ta’if agreement, and to give it to the popular movement. There are enough educated and intelligent representatives who could lead to the end of bigotry.  This would allow future generations to draft a more appropriate constitution and put a definitive end to the sectarian civil war.

The alternative is the only way to slowly eliminate the corrupt political class that has brought the country to bankruptcy, it is the only peaceful transition from the current sharing of political power (Ta’if Accords) to a non-confessional constitution that new generations will be able to write intelligently to satisfy their inspirations.