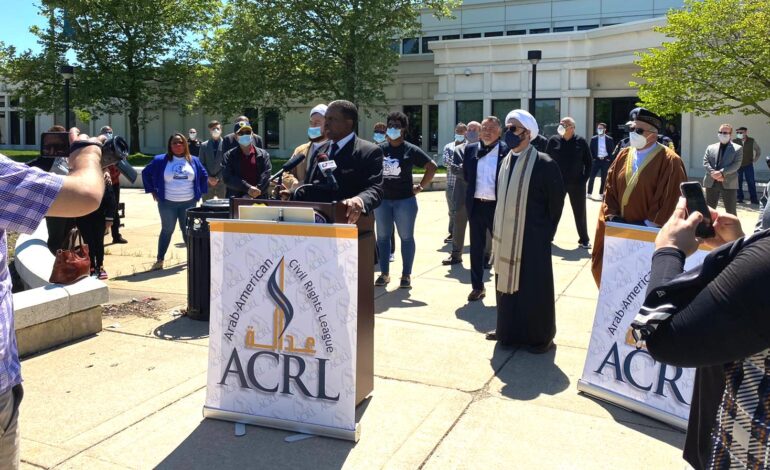 Arab and African American organizers speak in solidarity at a rally in Dearborn condemning the murder of George Floyd at the hands of Minneapolis Police. Photo: Abbas Al Haj-Ahmed/The Arab American News

DETROIT — A full weekend of largely peaceful protests in Detroit against the killing of George Floyd by Minneapolis police has sparked debates about racism among various communities in Metro Detroit.

Over the weekend, several groups brought this topic to light. At rallies, participants have expressed solidarity with African Americans and stood up against police brutality in all of its forms. A feature of this renewed debate is the discussion of anti-Black racism within Middle Eastern and Arab American populations.

Last week, the nation learned that the owner of Cups Foods in Minneapolis, where Floyd used a counterfeit bill before staff called police, including arresting officer Derek Chauvin, was Arab American. Chauvin would later kneel on Floyd’s neck for close to 10 minutes, killing him.

Anti-Blackness is a disease that has plagued this country long before COVID-19 ever did — District Four state rep. candidate Abraham Aiyash

The owner, Palestinian American Mahmoud Abumayyaleh, has repeatedly condemned the police’s actions and said he is proud of his family’s business legacy in that neighborhood. Neighbors and anti-hate groups have come to Abumayyaleh’s defense. Even so, the event reminds Detroiters of the reality of race relations in their neighborhoods, especially between Arab businesses and Black customers.

“We as a collective community, whether it’s the Asian community or the Middle Eastern community, have benefited tremendously from the Black freedom struggle,” state rep. candidate Abraham Aiyash told The Arab American News this week. Aiyash was one of the speakers at a rally in Detroit on Friday, where he touched on the importance of rooting out racism within the Arab American population in Metro Detroit.

“We have to recognize that when we as a community perpetuate deep-seated biases about Black and African American communities, whether intentional or unintentionally, we have to be responsible for that an accountable for that.”

Aiyash is running to represent the very diverse Fourth District, an area that covers the Yemeni-populated Hamtramck as well as various Black and White neighborhoods in Detroit. Just as relations between Black customers and Arab-owned business are often openly contentious, Aiyash said racism is a reality in some Arab homes as well.

“I was asked to speak on Friday on the issue of anti-Blackness, which I called a disease that has plagued this country long before COVID-19 ever did,” Aiyash said. “I will continue to speak within my spaces, in front of those who perpetuate anti-Blackness and push back on those conversations.”

Over the weekend, Arab Americans across the nation took to social media to highlight this problem, asking for self-exploration and calling out of anti-Black racism among friends and relatives.

On Sunday, the Arab American Civil Rights League (ACRL) held a press conference in Dearborn that brought together Arab American and African American organizers in solidarity and condemnation of police departments’ actions in the killings of Floyd, Ahmaud Arbery in Georgia, Breonna Taylor in Kentucky and countless others.

Live from Dearborn: Arab American community joins African American leadership at a solidarity event at the Dearborn Police Station. Hosted by the Arab American Civil Rights League (ACRL), speakers are expected to discuss anti-blackness, police brutality and cooperation to confront bigotry and racism. Masks are recommended and social distancing will be implemented.

Protests in Detroit continue to be multi-racial and embody this spirit of solidarity. A third day of protests on Sunday evening saw a rally outside of the Detroit Public Safety Headquarters, where a sizable crowd was dispersed by police using tear gas following Mayor Duggan’s 8 p.m. curfew.

Police lined the streets around the central business district in downtown Detroit on Sunday. Large police vans stood in preparation to haul arrested protesters, as had been the case over the weekend. By quarter to eight, the mood at the Sunday rally grew tense as cops in riot gears stood waiting to enforce the curfew, while protesters walked by, often exchanging words.

Detroit protests have been peaceful compared to other American cities over the weekend. Organizers have specifically made efforts to ensure property isn’t targeted. Police have been seen aggressively pushing against protests, however.

On Friday, eye witnesses told The Arab American News of police running up to an occupied vehicle and firing a gas canister into its window, a seemingly unprovoked action. A further rally is planned for Monday evening around 4 p.m.

Rally outside of the Detroit Public Safety Headquarters, Sunday, May 31.

Above: Rally outside of the Detroit Public Safety Headquarters, Sunday, May 31

Even while their police departments remain aggressive, authorities such as the Detroit mayor and police chief have said they agree with the spirit of protests. On Monday, Governor Whitmer criticized President Trump’s brazen attempts to undermine the nationwide protests. Trump has taken to taunting mayors and governors for not doing enough to curb protests.

“Instead of offering support or leadership to bring down the temperature at protests, President Trump told governors to ‘put it down’ or we would be ‘overridden,’” Whitmer said in a statement. “He said governors should ‘dominate’ protesters, ‘or you’ll look like a bunch of jerks.’” 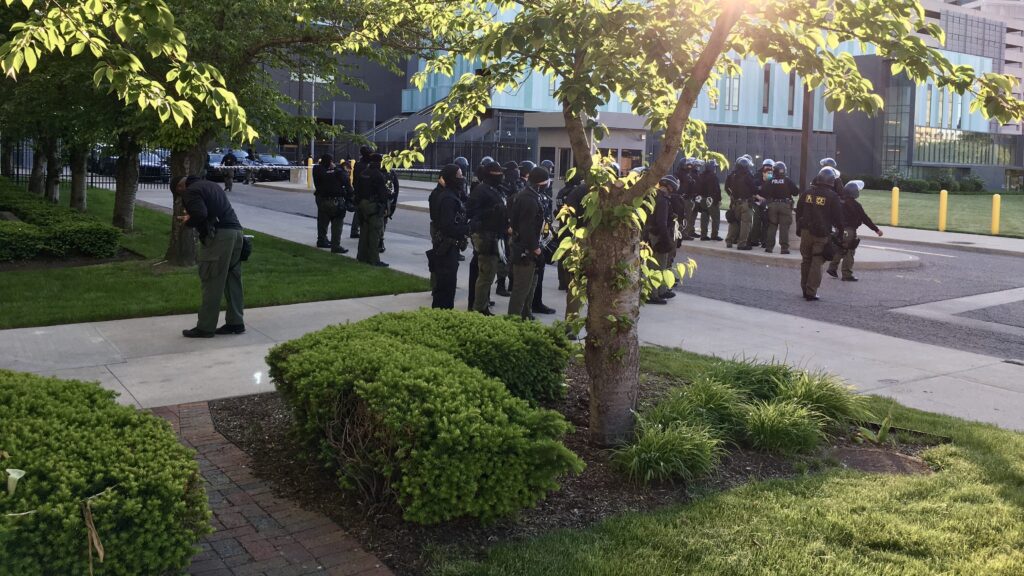 “The president’s dangerous comments should be gravely concerning to all Americans, because they send a clear signal that this administration is determined to sow the seeds of hatred and division, which I fear will only lead to more violence and destruction,” Whitmer added. “We must reject this way of thinking.”