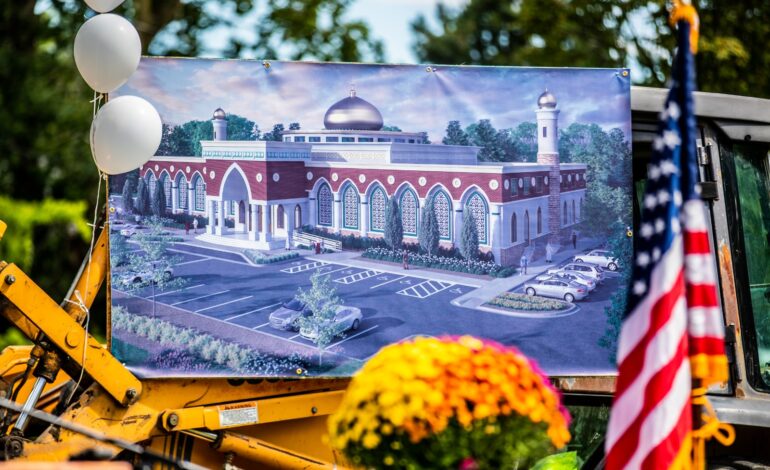 A rendering of the new AICC center in Sterling Heights sits on a bulldozer at the groundbreaking ceremony for the project, Wednesday, Aug. 19. All photos: Imad Mohamad/The Arab American News.

STERLING HEIGHTS — On Wednesday, five years or so after it petitioned the city of Sterling Heights to construct a 20,500 square-foot community center and mosque in the area of 15 Mile and Mound Road, The American Islamic Community Center (AICC) finally broke ground on the project.

A groundbreaking ceremony saw city and state officials come together to reflect on the importance of the event and of the power of understanding, goodwill and inclusion that made the project a reality.

The project didn’t start out under those circumstances, however. For those who may not be aware, the AICC’s efforts to build the center to expand out of its current Madison Heights headquarters met with severe outrage years ago, particularly from some in Sterling Heights’ Chaldean population.

Raucous City Council and City Planning Commission meetings exposed intense Islamophobic elements in the state’s fourth most populous city, with many residents openly displaying their fear of Muslims gathering at a place of worship and community center.

Even Sterling Heights officials became embroiled in the drama. Mayor Michael Taylor, who has since enthusiastically backed the project, voiced his opposition to the mosque on grounds that it may offend the Chaldean community.

A civil lawsuit by the AICC revealed that the mosque was not in violation of any zoning laws and that those problematic elements in the city had rejected its proposal on constitutionally wrongful grounds.

For some time the city argued that the proposed center violated technical requirements for its construction and denied the AICC’s requests to build the center. But it was soon revealed that those officials had denied the AICC’s request on more nefarious grounds. Officials like then-Planning Commissioner Jeff Norgrove were bluntly Islamophobia on social media posts. Email records showed some officials privately questioning if the AICC leadership had ties to terrorism.

A civil lawsuit by the AICC revealed that the institute was not in violation of any zoning laws and that those problematic elements in the city had rejected its proposal on constitutionally wrongful grounds. Soon the Department of Justice filed its own suit. The pressure was too much for the city and it settled out of court with the AICC in 2015, allowing the AICC to move ahead with its project.

“Celebrating the success of our constitution”

A sprit of reconciliation and forward-thinking ran through the groundbreaking ceremony on Wednesday. In attendance were U.S. Rep. Andy Levin (D-Bloomfield Twp.), members of the Sterling Heights City Council and the Police Department, the city manager, members of the U.S. Attorney’s Office, imams from the local mosques, news media and representatives from the Chaldean community.

Among those who delivered comments included The Arab American News Publisher Osama Siblani. When tension between the Chaldean and Muslim community were high at the outset of the community center controversy, Siblani and other leaders attempted to bring the concerned parties together to open an avenue of dialogue and communication.

A place of comfort and community

AICC Director Jeff Chehab told The Arab American News this week that he anticipates the new center in Sterling Heights will be finished within two years. He is hopeful the center will give the AICC’s growing membership a space to collect as a community and provide an opportunity for broader outreach and stronger relationships.

We want people to come talk to the imam, to our board members. Come see for themselves what we have to offer. — Jeff Chehab, AICC

“This is not only a mosque, it’s a community center,” Chehab said. “There will be a prayer room and hall, but there’s also basket ball court, a gym, library and cafeteria. It’s a place for the community to come together and be comfortable with people of the same faith.”

He said the AICC has a strong focus on understanding and open dialogue.

“We want people to understand our faith and ask questions, and not just follow mainstream media and those that insult our faith,” Chehab added. “We want people to come talk to the imam, to our board members. Come see for themselves what we have to offer.”

Both Chehab and longtime board member Hussein Sobh said Sterling Heights was a welcoming place and that it was important to look forward and use the groundbreaking as an opportunity to grow stronger bonds.

“We believe in coexistence and diversity,” Sobh said. “We are ready and willing to extend a peaceful hand to all the residents around us and welcome them to visit our center, just as we’d like to visit theirs. I am personally looking forward to starting an inter-faith (coalition) to work with other members of faith in the area to bring us all together.”