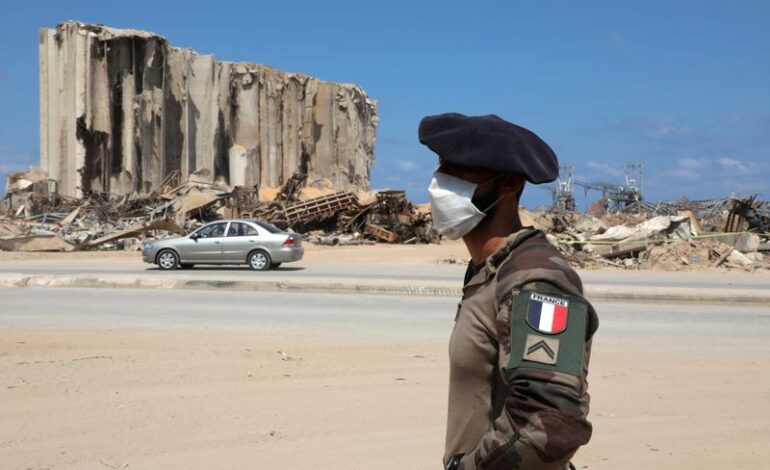 A member of the French military wears a face mask as he stands near the damaged grain silos during a joint effort with the Lebanese army to clear rubble from the port of Beirut following the explosion, as part of a tour organized for media and journalists in Beirut, Lebanon, August 26. Photo: Reuters

BEIRUT – French President Emmanuel Macron has outlined political and financial reforms Lebanese politicians need to make to unlock foreign aid and rescue the country from multiple crises, including an economic meltdown, according to a document seen by Reuters.

The two-page “concept paper” was delivered by the French ambassador to Beirut, a Lebanese political source said.

A source at Macron’s Elysee office said the ambassador had handed a short document to President Michel Aoun and Lebanon’s Parliament Speaker Nabih Berri, but described it as informal and not a roadmap.

The necessary measures include an audit of the central bank, appointment of an interim government capable of enacting urgent reforms and early legislative elections within a year.

The priority must go to the rapid formation of a government, to avoid a power vacuum which will leave Lebanon to sink further into the crisis, the French paper reads.

Lebanon’s now-caretaker government, which took office in January with the support of the Hezbollah group and its allies, failed to make progress in talks with the International Monetary Fund (IMF) for a bailout due to inaction on reforms and a dispute over the size of financial losses.

The government resigned over this month’s huge Beirut port explosion that killed at least 180 people, injured some 6,000 and destroyed entire neighborhoods, and renewed protests against a political elite over endemic corruption and mismanagement that has led to a deep financial crisis. 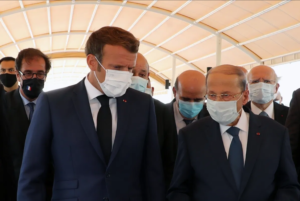 “The priority must go to the rapid formation of a government, to avoid a power vacuum which will leave Lebanon to sink further into the crisis,” the French paper reads.

It lists four sectors in need of immediate attention: Humanitarian aid and the authorities’ response to the COVID-19 pandemic; reconstruction after the Aug. 4 blast; political and economic reforms and an early parliamentary election.

It also called for progress in IMF talks and United Nations oversight on international humanitarian funds pledged to Lebanon in recent weeks, as well as an impartial investigation into the cause of the detonation of vast amounts of highly explosive material stored unsafely at the port for years.

Macron visited Beirut shortly after the blast and made it clear that no blank checks would be given to the Lebanese state if it did not enact reforms against waste, graft and negligence.

Since then, he held multiple phone calls with major political leaders under the country’s sectarian power-sharing system, a Lebanese political source said. Macron is due to return to Beirut on Sept. 1.

The paper states that Paris will play a major role in rebuilding Beirut port, bolster healthcare, send teams from its treasury and central bank to support the financial audit and help organize early parliamentary voting

Political rivalries and factional interests have prevented the formation of a new government able to tackle the financial crisis that has ravaged the currency, paralyzed the banking system and spread poverty.

The French concept paper stresses the need for an immediate and full audit of state finances and reform of the power sector, which bleeds public funds while failing to provide adequate electricity.

Parliament should enact laws needed to effect change in the interim period, it said. “Factions must be engaged to vote on the key measures that the new government will take in the next few months.”

The Elysee source said the document reiterated proposals agreed upon under the framework of a 2018 donor conference to support Lebanon and a subsequent international support group meeting.

“This document reaffirms the availability of France to support Lebanon within this framework,” the Elysee official said. “It is in no way a roadmap.”

The concept paper could deepen France’s role in Lebanon, a former French colony.

The paper states that Paris will play a major role in rebuilding Beirut port, bolster healthcare, send teams from its treasury and central bank to support the financial audit and help organize early parliamentary voting, along with the European Union.