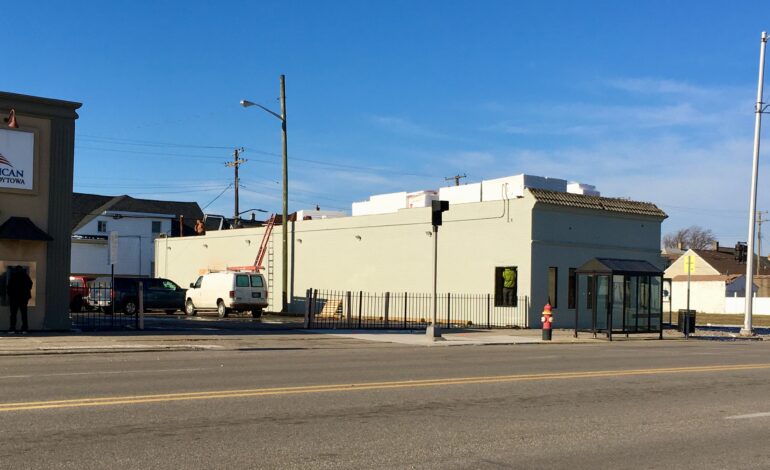 HAMTRAMCK — Construction on a third recreational marijuana retail outlet appears to be underway in Hamtramck, just as a majority of its City Council prepares to prohibit such establishments in the city.

The building is located on Jos Campau and Commor Street, and was the former location of Three Star BBQ. Building records show Puff Cannabis Company — a west Michigan medical and recreational marijuana business — has applied for a certificate of occupancy at the site.

A building permit was pulled by a Christopher Bacho, who may be the owner of the Vapor Shoppe, which has several locations across Metro Detroit.

With no ordinance prohibiting such businesses in place, Muslim residents were taken by surprise when the city’s first recreational marijuana business, Pleasentrees on Holbrook, opened last month. A second unrelated marijuana retailer is underway on Caniff Street and recently acquired a zoning variance from the Zoning Board of Appeals (ZBA) while in a legal dispute with the city to get that variance.

The former majority Muslim City Council failed to act on opting-out of recreational marijuana last year, even though much of the city’s signifiant Muslim population expected them to. Without a prohibition on the books, prospective marijuana business owners quietly entered the city’s economy.

After some Council members became aware of the present and prospective marijuana businesses, they took action with a proposed ordinance. The Muslim Council members, who comprise a majority of the Council, are expected to approve that ordinance next Tuesday.

The ordinance may be enough to restrict more marijuana retailers from opening shop in the future, but it is not clear what, if any, effect it will have on the two under construction. Pleasentrees would be immune to the ordinance.

Many others have shown interest in setting up shop. Over the last year, the Hamtramck city clerk has received at least half a dozen requests for confirmation, or attestation, that the city has no ordinance in place that prohibits recreational marijuana facilities. That does not mean that all those inquiring now have businesses underway.

Puff Cannabis CO. did not return a request by The Arab American News for comment about whether it was aware of the pending ordinance.

City attorney warned Council of consequences of failure to opt-out

In early 2019, a resolution declaring intent to prohibit such facilities came a month after Michigan voters legalized recreational marijuana. The law lets municipalities choose which way they want to go on the issue.

The resolution was drafted by City Attorney James Allen at the request of former Councilman Anam Miah. Miah and other Muslim leaders in Hamtramck knew there was no appetite for recreational marijuana among Muslim voters. The community made its opposition clear back when medical marijuana was first approved in Michigan, most notably at a Town Hall meeting where featured guest Dr. Abdul El-Sayed spoke of the medical benefits of the plant.

The resolution drafted by Allen was approved by Council 4-2 in January 2019. The resolution (RES 2019-003) directed the attorney to prepare an ordinance to completely prohibit all marijuana facilities, and also clearly stated the consequence of failing to affirmatively opt-out of recreational facilities.

It took nine months for the Council to take action on that ordinance. With two Muslim Council members, including Miah, not present for an Oct. 8, 2019 vote on a first reading of the ordinance, it died. Councilman Fadel Al-Marsoumi had given multiple written and verbal notices to the city administration and former Councilman Saad Almasmari of his absence more than a week in advance. It is not clear why Almasmari did not move to delay the vote until the full voting block was present.

Mayor Karen Majewski, who is a vocal proponent of marijuana operations in the city, joined Council members Ian Perrotta and Andrea Karpinski to vote against that first reading. Almasmari and former Councilman Abu Musa voted yes.

When ordinances fail to receive a majority and be enacted into law, typically they cannot be continuously resubmitted unless in accordance with Robert’s Rules of Order, which requires a member of the prevailing side to switch votes and ask for reconsideration at the next meeting only. 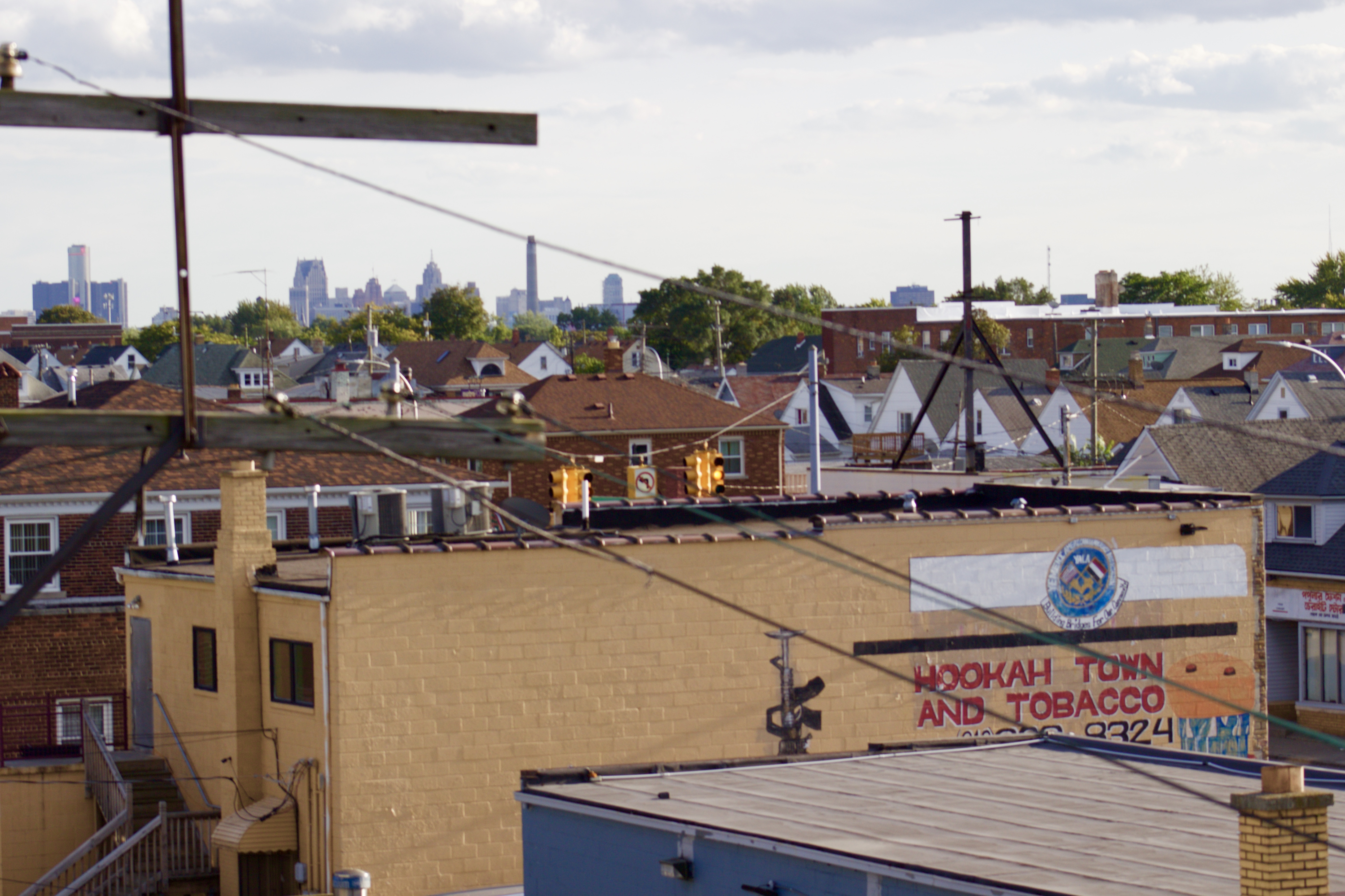 A view from Conant street in Hamtramck

We did our job. It’s not in our authority to set the agendas. The agenda belongs to the body – City Attorney James Allen

However, in an exercise of caution, Allen sent written communication in December 2019 advising the Council of the consequences of failing to pass some similar measure with a ban on recreational facilities.

“We did our job,” Allen told The Arab American News. “It’s not in our authority to set the agendas. The agenda belongs to the body.”

The Hamtramck City Council has three new Muslim members since last year’s election, replacing Almasmari, Miah and Musa. They have displayed shock and dismay that the city administration failed to inform them of impending marijuana retailers.

In reality, the administration has no real obligation to inform the Council of the specifics of every new business opening in the city. Without an ordinance in place, a marijuana retailer is allowed to set up shop if it has passed all required municipal and state requirements.

Marijuana is considered an intoxicant and is thus deemed impermissible by most scholarly interpretations of Islam. But anti-marijuana residents also talk of harmful effects of the plant, claim facilities lead to increased crime and that marijuana use leads to harder drugs.

Recent research has debunked the argument about an increase in crime. Studies also do not conclude that marijuana leads to harder drugs, though some research does show increased addictive behavior in people exposed early and calls for more in-depth look into the social conditions that lead to addiction to substances.

Such points have been debated ad nauseam at numerous city and online forums, between mostly-White pro-marijuana residents and the many Bengali and Yemeni residents who stand opposed. Neither side is able to sway the other.

Nevertheless, Council members Mohammed Hassan, Nayeem Choudhury, Mohammed Alsomiri and Al-Marsoumi are expected to pass an ordinance on Tuesday, Dec. 8, to do some damage control on behalf of Muslim residents, after their previous counterparts fumbled and dropped the ball on the issue last year.

Others, like the ZBA’s Nasr Hussain, have tried different measures, like voting to deny the Caniff business a zoning variance. Though Hussain was initially successful, the ZBA was later asked to reconsider its decision by the City Council (Muslims included) after the business sued the city.