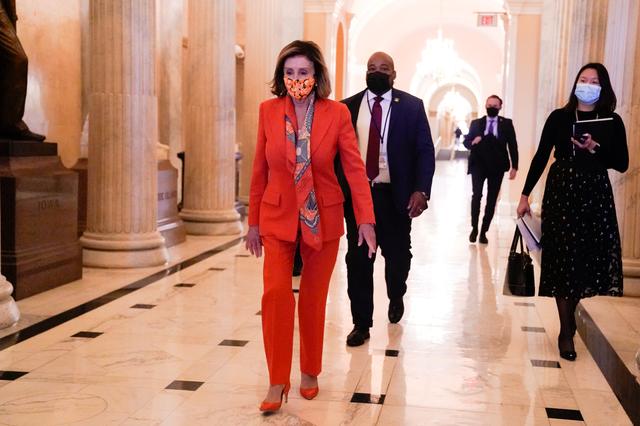 WASHINGTON D.C. — As the coronavirus pandemic roared to new record highs across the U.S., it lit a fire in the U.S. Congress, where Republicans and Democrats were scrambling to pass a new round of aid after months of partisan finger-pointing and inaction.

Even as they contemplated passing a third stopgap measure to give them a few more days to agree on final amounts, lawmakers from both parties said COVID-19’s worsening toll meant that failure to agree was no longer an option.

Multiple lawmakers floated the possibility the federal government would run out of money early Saturday morning while the COVID-19 relief negotiations continue, if Congress is unable to pass a temporary government funding bill before Friday at midnight.

The Senate’s number two Republican, John Thune, said there could be an objection to passing such a stopgap measure from those who want to keep the pressure on for a deal on COVID-19 aid.

“Government shutdowns are never good,” Thune said. “If it’s for a very short amount of time on a weekend, hopefully it’s not going to be something that would be all that harmful, but that being said, the preferable route is to keep the government open and get this done and get it done quickly.”

But a House Democratic aide familiar with the negotiations said there was confidence that the Democratic-run House could meet the midnight Friday deadline for passing spending and coronavirus aid measures.

Lawmakers said they were being spurred to action by hospitalizations and deaths due to the pandemic rising at an alarming rate. The United States has registered more than 17 million COVID-19 cases and nearly 309,000 deaths — by far the most in the world.

“Today, this week, we’re seeing more deaths due to COVID than ever; the fact that even with a vaccine coming in my state we are at our highest rate ever for transmission of the virus, for hospitalizations,” said Republican Senator Lisa Murkowski of Alaska.

“That’s the difference … the calendar, the passage of time and the passing of lives,” Murkowski said when asked by reporters why a coronavirus aid bill was gaining momentum among Senate Republicans.

The coronavirus legislation is expected to include stimulus checks of about $600, extended unemployment benefits, help for states distributing the vaccine and assistance for small businesses

Republicans also have a wary eye on the impact inaction might have on a pair of Jan. 5 U.S. Senate runoffs in Georgia, which will decide whether their party maintains control of the Senate for the next two years or hands it over to Democrats.

For months, the Republican-run Senate refused to take up a $3 trillion bill the Democratic-run House passed in May, pointing out that Congress had previously passed $3 trillion in aid in March and April. For a long time leading Republicans argued for something closer to $500 billion more.

Now, House and Senate leaders are negotiating an approximately $900 billion bill that would be attached to a $1.4 trillion measure to fund federal programs through next September. The plan is to attach the bill to a massive government bill and pass both by Friday at midnight to avoid a shutdown of much of the federal government.

Lawmakers in both parties said they wanted to avoid a shutdown.

The coronavirus legislation is expected to include stimulus checks of about $600, extended unemployment benefits, help for states distributing the vaccine and assistance for small businesses struggling through the pandemic as millions have been thrown out of work.

Senate Majority Leader Mitch McConnell said that if a deal is not reached by midnight Friday, he would insist that lawmakers put off a Christmas break until one is reached. That would necessitate, he said, passage of a “very, very” short stopgap measure to keep the government running.

Two contentious issues appear to have been left by the wayside. The measure was not expected to include a dedicated funding stream for state and local governments, a Democratic priority, or new protections for companies from lawsuits related to the pandemic, something high on the Republican agenda.

Lawmakers were discussing $300 weekly in federal unemployment benefits — which would also be half the amount that passed last spring and expired in the summer — and about $330 billion to help small businesses, lawmakers said.