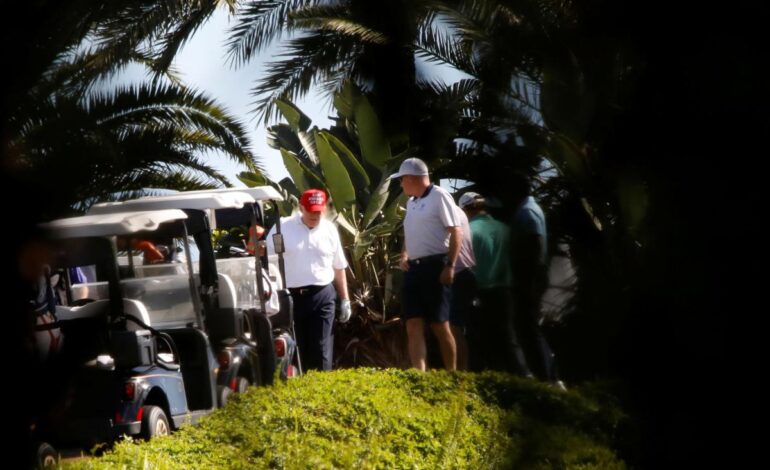 FLORIDA —  President Trump, who has been at his golf course while a stalemate ensued over a $2.3 trillion combined stimulus and spending package, has now signed the bill into law.

The law will release $900 billion in stimulus funds as soon as possible, including those $600 stimulus checks Trump earlier wanted increased. Republicans refused efforts by both Trump and the Democrats to instead give Americans $2,000.

Not signing the bill by Tuesday would have meant a government shutdown on Tuesday. Eviction protections for millions of Americans would have lapsed later this week; more than 14 million people would have lost unemployment benefits and no stimulus checks would have been issued.

“Good news on COVID Relief Bill. Information to follow!” Trump said in a message on Twitter earlier Sunday evening, without giving much explanation.

After months of debate and grim negotiations, Republicans and Democrats finally agreed on a combined stimulus and spending package last weekend, with the support of the White House. But Trump stunned both parties when he later said he was unhappy with the bill despite offering no objections to the terms of the deal before Congress voted it through last week.

It is not immediately clear why Trump relented and signed the bill, behind closed doors, on Sunday. Trump said he was signing the bill with “a strong message that makes clear to Congress that wasteful items need to be removed.”

“Much more money is coming,” he said in a statement, though he provided no other details on what form that money would take.

Trump’s nearly week-long delay in signing means it will take that much longer for pandemic financial support to reach Americans. With the bill being signed a day after the federal unemployment aid programs lapsed, the unemployed will likely miss a week of benefits, with payments not restarting until next week.

President-elect Joe Biden has said he will seek another relief package soon after his inauguration next month. But House Democrats renewed their efforts, and Trump’s earlier request, to up the stimulus payments to $2,000 shortly after the signing. Many of Trump’s fellow Republicans have opposed such an increase repeatedly.

A vote to increase the payments was brought up in the Democratic-controlled House on Monday, where it voted 275-134 to approve the $2,000 payment measure, narrowly exceeding the two-thirds majority needed. The measure now goes to the GOP-controlled Senate, where it faces an uncertain future on Tuesday.

Senate Democratic leader Chuck Schumer (D-N.Y.), said he would offer Trump’s proposal for $2,000 checks for a vote in the Senate, effectively putting Republicans on the spot.

“The House will pass a bill to give Americans $2,000 checks,” Schumer tweeted. “Then I will move to pass it in the Senate.” He said no Democrats will object. “Will Senate Republicans?”

“The president must immediately call on Congressional Republicans to end their obstruction and to join him and Democrats in support of our stand-alone legislation to increase direct payment checks to $2,000,” House Speaker Nancy Pelosi said in a statement Sunday evening. “Every Republican vote against this bill is a vote to deny the financial hardship that families face and to deny the American people the relief they need.”

Republican Representative Kevin Brady said the payment increase does nothing to help people get back to work. “I worry that as we spend another half a trillion dollars so hastily, that we are not targeting this help to the Americans who are struggling the most and need that help,” he said.

For now, the U.S. Treasury Department is anticipating sending the first wave of $600 stimulus checks to U.S. individuals and households as early as this week.

House Democrats and Republicans also voted 322-87 on Monday to override the president’s veto of the $741 billion national security package, which among other things will raise troops’ pay and direct the purchase of weapons. Only 66 Republicans sided with Trump’s rejection of the bipartisan bill, showing deep divisions in the Republican Party.

Trump rejected the military bill because he wanted it to overturn liability protections for social media companies that have been unfriendly to him. Trump also opposed a provision to rename military bases named after generals who fought for the pro-slavery Confederacy during the Civil War.

This will be the first Congressional override of one of Trump’s vetoes. As of Monday, that override is also now in the hands of the Senate.

On Jan. 6, Congress will meet in a joint session to formally count the votes of the Electoral College, a day that is expected to draw protests from Trump supporters. Trump hopes Republicans will object to certificates in battleground states he lost, in a final effort to overturn results of the November election he lost.

The coronavirus pandemic has killed nearly 330,000 people in the U.S. and has caused widespread economic damage.