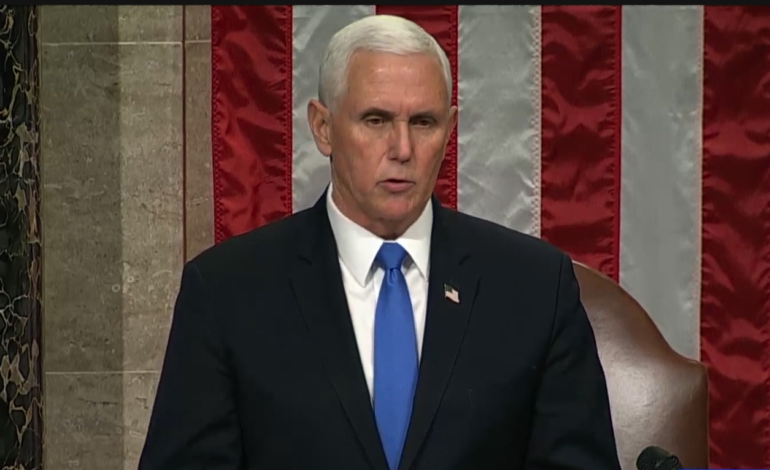 Outgoing Vice President Mike Pence presides over a joint congressional session as the electoral votes from November 2020's presidential election are counted into the early hours of Thursday. Photo via C-Span

WASHINGTON, D.C. — After a day of chaos in Washington, D.C., and with outgoing Vice President Mike Pence presiding, the U.S. Congress has now confirmed the results of the November 2020 presidential election, affirming the victory of Joe Biden and his running mate, Kamala Harris.

An earlier debate over Arizona election results, which was interrupted when supporters of President Trump stormed the Capitol building, concluded later in the night on Wednesday into early Thursday, with those objecting failing to gain enough votes to throw out the electors for that state.

There were objections to results from Georgia and Michigan by some Republicans in the House of Representatives, though no senator signed on.

A senator has to sign on to such an objection for the Congress to debate the results in their respective chambers. Pennsylvania’s results were objected to and signed by a Republican senator; that objection was later rejected by both the Senate, and after a two hour debate, the House of Representatives. Wisconsin’s results saw an objection by some House Republicans, but no senator signed on. Biden thus gained 306 electoral votes as confirmed by Congress, sealing the deal on Trump’s election loss.

Objections would have had to pass both chambers of the U.S. Congress for electoral votes from any of the disputed states to be thrown out, an unlikely scenario given the Democratic majority in the House, and with many Democrats and many Republicans rejecting unsubstantiated claims of voter fraud and unconstitutional election law changes in battleground states like Pennsylvania (which were enacted through bipartisan state legislative approval).

Trump had hoped his ally Pence would dispense with tradition and perform a miracle by stepping out of his purely ceremonial role as the person who oversees the counting of the electoral votes sent over by states themselves, and hand him the victory in this final hour. Pence himself had to inform the president of his simple role in the proceedings.

History was made on Wednesday as thousands of Trump’s supporters stormed the highly restricted Congressional building, emboldened by Trump and allies’ remarks at a rally earlier that day, and no doubt perceiving an ultimate betrayal by Pence, much of the Republican party and Congress as a whole. A woman who is assumed to have been part of the mob was shot in the chaos and later died in a hospital.

After weeks of launching claims of voter fraud without evidence, Trump said he will respect the outcome and go ahead with an orderly transition.

“Even though I totally disagree with the outcome of the election, and the facts bear me out, nevertheless there will be an orderly transition on January 20th,” he said in a statement early Thursday.