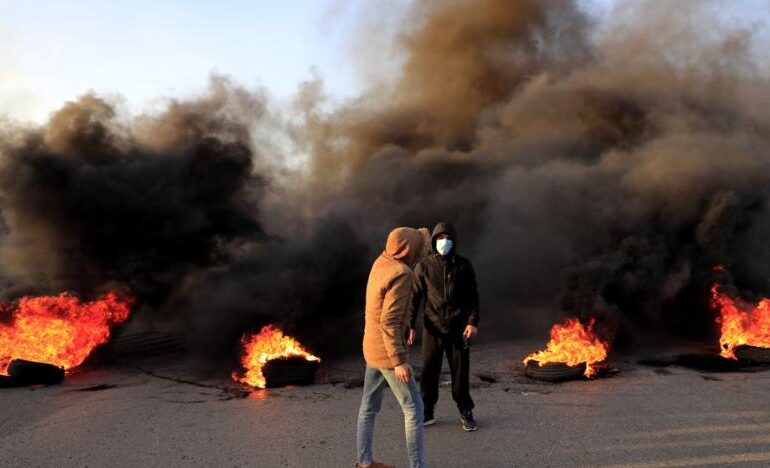 Protesters stand in front of burning tires that were set on fire to block a highway, during a protest against the economic and financial crisis in Beirut, Lebanon, March 2. – Photo by AP

BEIRUT — Protesters blocked some roadways in Lebanon for a second day on Wednesday, after the currency’s fall to a new low further enraged a population long horrified by the country’s financial meltdown.

In the past year, Lebanon has been through a popular uprising against its political leaders, the bankruptcy of the state and banking system, a COVID-19 pandemic and, in August, a huge blast that killed 200 people and destroyed parts of Beirut.

The financial crisis has wiped out jobs, raised warnings of growing hunger and locked people out of their bank deposits.

Lebanese President Michel Aoun said in a tweet that he had asked the central bank governor for an inquiry into the reasons behind the country’s latest currency tumble and stressed that returning access to deposits was a leading goal.

“The main priority remains refunding depositors’ money… illicit and suspect practices are the main reason behind the loss of a large sum of deposits,” a statement said.

The collapse of the Lebanese pound, which fell to 10,000 to the dollar on Tuesday, slashed about 85 percent of its value in a country relying heavily on imports.

It was the last straw for many who have seen prices of consumer goods such as diapers or cereals nearly triple since the crisis erupted. Demonstrators burnt tires and rubbish containers across many parts of Lebanon to block roads on Tuesday night.

“We need a salvation government to implement an economic rescue plan because these temporary fixes are no longer working,” Beirut resident Jad Selim said.

Fractious politicians have been unable to agree on a new government since the last one quit in the aftermath of the Aug. 4 Beirut blast, leaving Lebanon adrift as poverty spreads.

“We are a failed state waiting for more tragedies to happen,” Lebanese analyst Sarkis Naoum said, commenting on the lack of action by officials since Tuesday night.

“They are hostages willingly to foreign states and powers and to their personal interests,” he said. “It is sad but true.”

A new cabinet is necessary to implement reforms needed to trigger billions of dollars of international aid to fix the economy.

Prime Minister designate Saad al-Hariri was nominated in October and tasked with agreeing a new cabinet, but tensions between him and President Michel Aoun have ended in political deadlock.

“If I were a betting man I would say that the formation of the government, how long it is taking, is a good indicator of how the decision making process will be once the government gets formed,” Dan Azzi, a Lebanese economic analyst, said.

Tuesday’s protests coincided with a much anticipated easing of a strict coronavirus lockdown that has kept most businesses closed for almost two months until this week.

The Lebanese pound slide has left shop owners, who complained of non-existent government support during the closure, in even darker spirits as customers’ purchasing power is further eroded.

“As you can see the street is empty,” said Andre Antipa, a clothes store owner in Beirut’s Burj Hammoud district. “The customers are not here, they are just looking for food and water.

Another clothes store owner, Sami Yeghyaian, said his clients gasped and screamed when they saw the price of a pair of jeans.

“We can’t continue if there is no solution to the dollar problem. A lot of shops will close and we will be the first.”