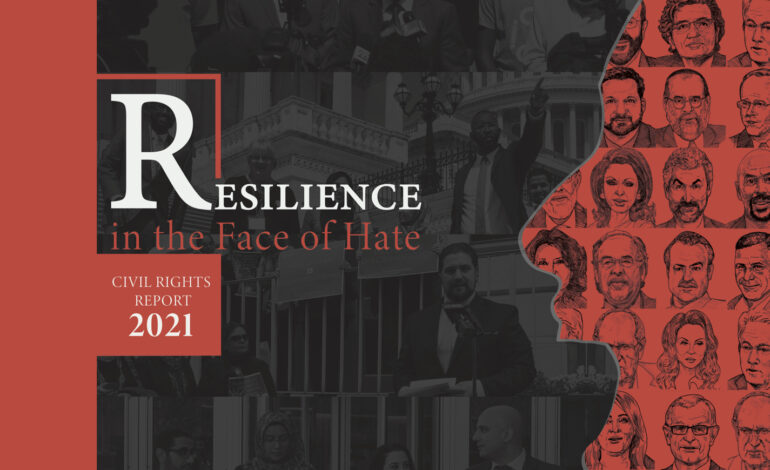 The new report shows a 9 percent increase in civil rights complaints since 2018, and a decrease in hate crimes likely due to COVID-19 pandemic lockdown. Image(s) courtesy: CAIR

WASHINGTON, D.C. — The Council on American-Islamic Relations (CAIR) has released a report detailing nationwide incidents of civil rights complaints by Muslim Americans that the group received over the past year.

The 2021 report is named Resilience in the Face of Hate.

The report’s breakdown shows Muslim Americans submitted an increased number of complaints of anti-Muslim bias as the country lay in the grips of a deadly pandemic. The reports splits the 6,144 complaints into different complaint topics:

The report shows there was a 9 percent increase in complaints received by CAIR since its last civil rights report, Targeted, which was published in 2018.

There was a 20 percent decrease in reported hate crimes to CAIR in 2020, which the analysis speculates was likely caused by nationwide COVID-19 pandemic lockdowns.

CAIR provides free legal services to individuals who have been a victims of anti-Muslim discrimination or bigotry all across the country, with many prominent cases of advocacy and legal representation for Muslim Americans in Michigan over the years.

The new report highlights CAIR’s major legal achievements in 2019 and 2020, for example, filing a lawsuit challenging Texas’ anti-BDS legislation on behalf of Bahia Amawi, a school speech pathologist, who lost her job after refusing to sign an employment contract extension that included a pledge not to boycott Israel.

A judge granted CAIR’s motion for summary judgment in the case of the 23 American Muslims who were unjustly labeled as suspected terrorists by their government under the “terror watchlist”, causing extensive harm to their families, careers and ability to travel. The decision was later reversed once the government appealed. CAIR has since asked the appeals court to review that decision, which remain pending.

This important report clearly shows the need for continued vigilance in defense of civil rights for American Muslims and members of all other minority communities — Nihad Awad, CAIR

The report also collects CAIR’s advocacy efforts, especially initiatives it undertook during the 2020 election season. The group introduced a 24/7 rapid response hotline that was operated by its legal team, a community-wide training that explained voting rights to Muslim voters and what to do if these rights were being violated, a calling center for 150,000 registered Muslim households on the day of the election and a nationwide exit poll survey of Muslim voters in efforts to collect data, among other initiatives.

“This important report clearly shows the need for continued vigilance in defense of civil rights for American Muslims and members of all other minority communities,” said CAIR National Executive Director Nihad Awad. “It is vital that those challenging growing bigotry and hate receive the support they need to meet this critical challenge.”

The group says its “mission is to enhance understanding of Islam, protect civil rights, promote justice and empower American Muslims.”