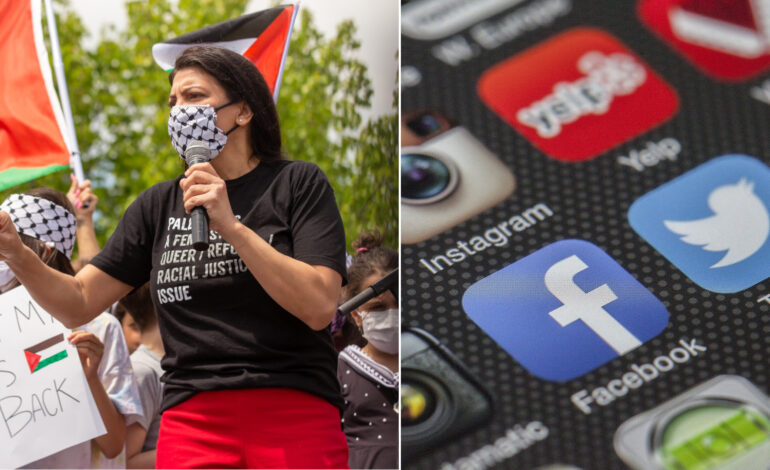 U.S. Rep. Rashida Tlaib (D-Detroit) spoke of a "disturbing double-standard" in social media companies' policies when it came it to Palestine

On Tuesday, U.S. Rep. Rashida Tlaib (D-Detroit) sent a letter to the parent companies of Facebook, Instagram, Twitter and TikTok, urging the platforms to cease censorship of Palestinian political speech in the wake of a report they’ve been censoring content and disabling user accounts raising awareness about recent Israeli state-backed violence on Palestinians.

“With reporting in the mainstream media often ignoring and silencing Palestinian voices, social media has become a crucial source for information, pictures and videos documenting the injustices that Palestinians face,” Tlaib wrote in the letter. “Social media accounts have been some of the only places for Americans to access first-hand accounts of the occupation and violence from Palestinians on the ground. That is why these reports are particularly troubling — Palestinians often have nowhere else to turn to make their voices heard other than social media.”

Tlaib asked a series of questions, hoping to clarify the respective companies’ policies on matters such as the role human moderators at their companies have in determining whether content should be removed and whether those human moderators ever received training specific to content related to Israel and Palestine, ensuring that Palestinian voices are being heard in the decision-making process regarding the treatment of content about Palestine and Israel and more.

“I cannot understand how Facebook can justify censoring peaceful Palestinian voices while providing an organizing platform for extremist hate,” the letter read.

A recent article by AJ Dellinger for the publication Mic showed Facebook had come under fire for allegedly censoring content from Palestinians, sparking a coordinated effort to lower Facebook’s ratings on the Apple App Store and the Google Play Store.

Pro-Palestinian activists met the censorship with “a flurry of one-star reviews”, bringing Facebook’s rating on Apple’s App Store down to 2.3 out of 5 stars, and for Android users, 2.4 out of 5 stars on Google, by Monday.

Activists left reviews that claimed the platform had deactivated accounts and removed content that supports the Palestinian fight for freedom.

Dellinger reported the situation had caused a panic at the Facebook offices, with internal chatter about the users feeling silenced by the social media giant for laying bare Israel’s decades long atrocities against Palestine, as well as its current destruction in the Gaza Strip.

The Intercept reported earlier this month that Facebook policies have suppressed criticism of the Israeli government and made it next to impossible for Palestinian activists to highlight acts of abuse and violence carried out in the region.