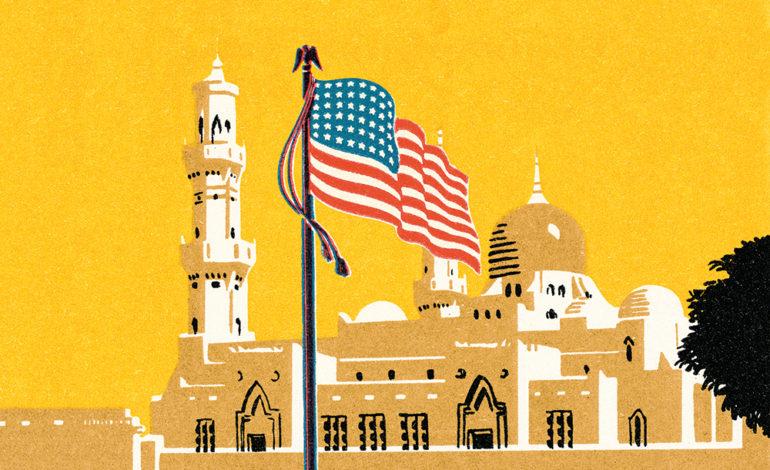 We chose to fight for an America true to her ideals. That fight continues.

Saturday marks the 20th anniversary of the horrific terrorist attacks on the World Trade Center. Nearly 3,000 people lost their lives on that fateful day. We honor their memory.

As we approach the anniversary, I’ve been reflecting on what the past 20 years have meant for me and for the broader Muslim community in our country, of which I am part. Indeed, few communities experienced the post-9/11 era quite like Arab and Muslim Americans (and the many other communities brown and other enough to be rendered Arab or Muslim in the eyes of ignorant people). I wrote about my personal experience of 9/11 in my book Healing Politics:

I watched terrorists with names like mine attack my country in the name of my faith. Three thousand of my fellow Americans were killed in the craven terrorist attacks in New York, Washington, D.C. and Pennsylvania. The attack devastated me.

For me, as a Muslim American, the trauma of that day was compounded by having my names and faith targeted. When the Twin Towers fell, so did any pretense I had of ethnic anonymity; I wasn’t just another Brown kid anymore. That morning I had strutted into school with the confidence it takes 16 years to develop and only a moment to take away. Within a few hours of the attack, Mom called me on my blue Nokia brick to tell me that she was going to be picking up my brother from school. His name is Osama. I could come home if I wanted to.

“I don’t know… in case anyone gets picked on.” I had already started to hear epithets buzzing around. “Those damn Muslims did this. Fucking ragheads…”

At my school of approximately 1,000 students there were about 50 Muslims—many more than in most public high schools, but too few to feel as if we had a presence. To be sure, there was little I could do if someone got picked on, but being there might help. It was the first time I felt responsible to people who shared my identity—because it was the first time our identity had been singled out on such a broad stage.

I heard the new brand of hate that would follow me after 9/11 for the first time a week later, on the football field. A hardworking if not gifted athlete, I made up for my deficits in size and speed — and generally everything else — with a decent mind for the game and the will to work harder than my peers. On defense, I often got double-teamed to make sure I couldn’t make plays or to prevent me from seeing the field. That day I was double-teamed the entire game — and when and if the refs weren’t looking, the players on the other side would punch and kick me, calling me names like “sandnigger” and “towelhead.” On more than one occasion, though, I saw a ref look right at us — and do nothing.

I was getting frustrated. After one play in the middle of the third quarter, one of the opposing players grabbed my face underneath my face mask, screaming, “Go home, Osama!”

For the first time in the entire game, I hit back, socking the kid with an uppercut underneath his helmet. I’m not sure why I did it. It might have been the anxiety I knew my brother’s name was causing my family. It might just have been sheer frustration. We were winning the game, for God’s sake. I regretted it the minute I made contact.

The ref had turned around just fast enough to see me land the punch. His yellow flag went flying. I got yanked from the game.

Our defensive coordinator — who looked like Popeye’s forearms grew a human — grabbed my face mask and pulled it so close I could smell his Old Spice aftershave.

“What the hell was that?” he asked, his blue eyes piercing through mine.

“Damn obvious you did, son!”

“They were hitting me off play the entire game and they were calling me names and making fun of my religion, and—”

His eyes warmed, his tone that of someone who didn’t want to have to tell you something that circumstances were forcing out of him: “Son, let me tell you something: you’re going to be Abdul El-Sayed for the rest of your life. You can either use it as an excuse or you can use it as motivation.”

I often reflect on that lesson, however unfair and frankly accommodating of bias it might seem in hindsight. Motivation toward what, exactly?

We, as a country, yet struggle to define “what, exactly.” Twenty years has rendered it more clearly.

The terrorists who attacked our country that day only exploited Islam as a pretext for an act of violence rooted in tribalistic grievance. They wanted chaos. The attacks sent our country into writhing convulsions of fury. Whether the wars in Afghanistan and Iraq, the stunning decimation of our civil liberties or the polarization of American society, of which we are yet suffering the consequences today.

A whole new edifice of control, the Department of Homeland Security, was created in order to marshal the full might of a sprawling security state that confused ethnicity and faith for mal-intent.

The logic of the post-9/11 era sacrificed our basic collective liberties, most of all against Muslim Americans. A whole new edifice of control, the Department of Homeland Security, was created in order to marshal the full might of a sprawling security state that confused ethnicity and faith for mal-intent. Shining its spotlight harshly on Arabs, South Asians and Africans, it deliberately left the greatest threat to our security in the shadows — missing the most common source of American terrorism, “homegrown” and “radicalized” White men.

We fought 20 years of collective war through which we violated the basic rights of millions of non-combatants to make home, live prosperously and thrive in the places in which they were born. Hundreds of thousands lost their lives. Thousands of U.S. service members and contractors died, too — most of them back home. Among veterans of these wars, death by suicide has been four times as common as death on the battlefield.

In an echo of the worst of our history — the decimation of Native Americans, the Transatlantic Slave Trade, Jim Crow segregation, Japanese interment — we did all of that in the name of an America founded on the self-evident truths that “all men are created equal.” Though the past 20 years have obscured their light, those ideals remain as luminescent as they were when they inspired our parents and our parents’ parents to come to these shores.

The “what, exactly?” It’s nothing short of the America of her ideals.

On 9/11 millions of Muslim Americans were called to defend it. Admittedly, at first, we demurred. Our leaders told us this would pass. The best course of action, they said, was to keep our heads down, to “fit in” — change our names, fix our accents and hide our heritage. The patriotic duty was to assent to the implication that we were guilty until proven innocent, to take our collective punishment with a smile for the privilege of playing our part in a war on terror increasingly defined in opposition to our very identities. Only in complicity could we prove that we were more “us” than “them.”

We decided that our stories were part of the American story and told them to anyone who would listen. Muslims blazed trails in our public discussion, in magazines and newspapers and on screens, big and small.

We built bonds of love, coalition and allyship with our sisters and brothers in communities that had long since suffered the White supremacy and xenophobia we’d only just begun to endure. We embraced our names, our stories and our heritage. We embraced America for what it was supposed to be, vying to do our part to defend it from what it was fast becoming — from what it, for too long, has been.

We decided that our stories were part of the American story and told them to anyone who would listen. Muslims blazed trails in our public discussion, in magazines and newspapers and on screens, big and small. Hundreds of Muslims did the unthinkable and ran for office, aspiring to the highest ideal of citizenship in a country that had tried to deny us even citizenship’s most basic rights. Hundreds more got engaged, showing up to protest the Muslim ban, then gun violence, then for Black lives. Millions more voted for the first time.

America is, and has always been, a struggle. Some want to tell us that America is “blood & soil”, their concept of history beginning conveniently after White people from Europe had decimated native people whose blood has inhabited this soil since before they ever arrived. Their vision of America necessarily excludes or subjugates those who don’t look like them, pray like them or share their heritage.

But we believe that America can be more powerful than simply a place and a people — but a set of human ideals that necessarily embraces anyone committed to equity, justice, human dignity and true liberty. Defending America should never have meant responding to tribalistic grievance with tribalistic grievance as so much of the post-9/11 era has been. Rather it should have meant embracing the ideals that transcend it.

That’s what it means to fight for America — it’s what it should always have meant. Twenty years on, I’m proud of my community for reminding us.