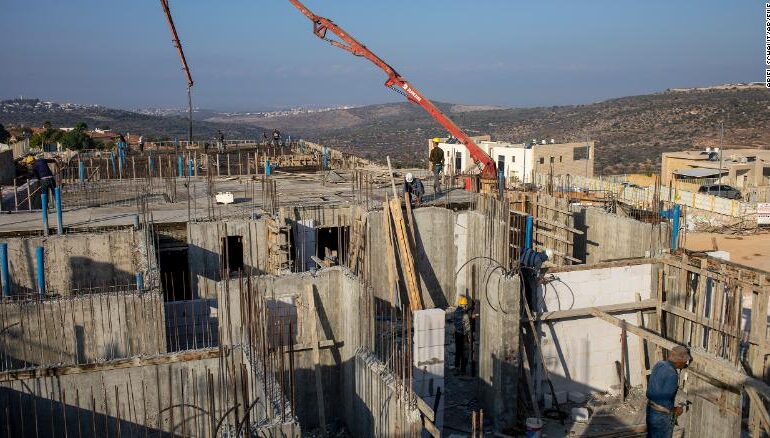 PALESTINE — Despite objections from the otherwise-aligned U.S. government, and condemnation from Palestine-rights groups, Israel moved forward on Wednesday with plans to build some 3,000 homes for Jewish settlers in the occupied West Bank.

The move does stand in defiance of the Biden administration’s strongest criticism to date of such projects.

An Israeli defense official said a planning forum of Israel’s liaison office with the Palestinians gave preliminary approval for plans to build 1,344 housing units and its final go-ahead for projects to construct 1,800 homes.

As in segregated housing in apartheid-era South Africa, the homes will not be available to those who are native to the territories Israel occupies.

It will be up to Defense Minister Benny Gantz, a centrist in Israel’s politically diverse government, to give the nod for construction permits to be issued, with further friction with Washington looming.

The U.S. said on Tuesday it was “deeply concerned” about Israel’s plans to advance thousands of settlement units, calling such a step damaging to prospects for a two-state solution to the “Israeli-Palestinian conflict” and said it strongly opposes settlement expansion.

“As we have said, this administration is strongly opposed to the expansion of settlements,” a U.S. State Department spokesperson told Reuters.

The Biden administration’s muted reactions to these and other crimes is emboldening the Israeli apartheid government to commit more crimes — Nihad Awad, CAIR

Axios reported a tense conversation between U.S. Secretary of State Antony Blinken and Gantz around the issue on Tuesday.

“We urge the government of Israel to reverse its decision to advance plans for the construction of around 3,000 settlement units in the West Bank,” read a statement from the foreign ministries of Belgium, Denmark, Finland, France, Germany, Ireland, Italy, the Netherlands, Norway, Poland, Spain and Sweden. “We reiterate our strong opposition to its policy of settlement expansion across the Occupied Palestinian Territories, which violates international law and undermines efforts for the two-state solution.”

CAIR said that while the Biden administration has previously said it opposes unilateral Israeli settlement construction on occupied Palestinian land – and such projects being illegal under international law — the White House has failed to publicly challenge the Israeli government over its continued expansion of segregated settler housing projects and expulsion of dozens of Palestinian families in Silwan, Sheikh Jarrah and elsewhere.

The Palestine website Mondoweiss says the designation “effectively outlaws” the activities of these civil society groups, and allows Israeli authorities to take a number of measures against them, including closing down their offices, seizing their assets and arresting and jailing staff members. It also criminalizes the funding or public expression of support for the organizations and their activities.

Earlier this week, Israel undertook more aggressive violations of Palestinian rights, with the destruction of the historic Muslim cemetery of Al-Yusufiya near the walls of the Old City of Jerusalem. An Israeli municipal crew escorted by police forces stormed the cemetery and began bulldozing and digging, destroying Palestinian and Arab graves, The Middle East Monitor reported.

Israeli police expelled local residents who attempted to intervene and prevented them from entering it to protect the graves of their relatives.

Earlier Israeli municipality demolished part of the cemetery, exposing human remains buried in a section where Arab soldiers killed during the 1967 war were buried. The development is part of a plan to build multiple Talmudic parks and trails for Jewish settlers and tourists around the walls of the Old City.

“They even ethnically cleanse dead people,” said Dearborn activist Amer Zahr on Facebook. “When we say they took our land fully furnished, we are not exaggerating. اخدوها مفروشة #FreePalestine.”