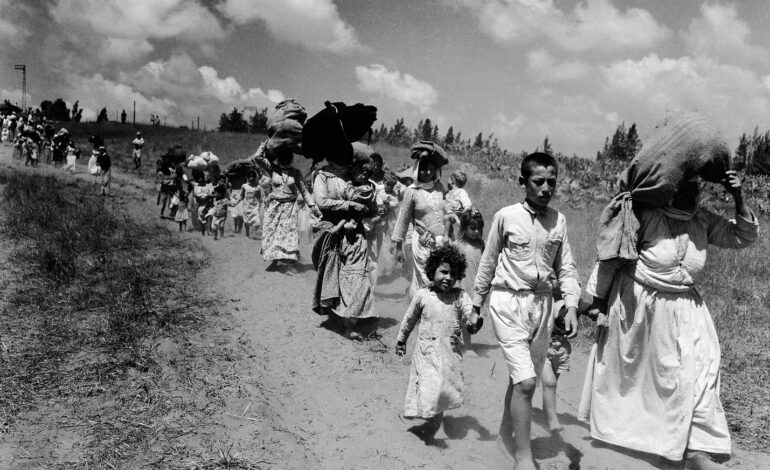 Palestinians being driven out from villages near Tulkarm. Photo: Bettmann/CORBIS

Haaretz’s investigative report – “Classified Docs Reveal Massacres of Palestinians in ’48 – and What Israeli Leaders Knew” – is a must-read. It should be particularly read by any person who considers himself a “Zionist” and also by people who, for whatever reason, support Israel, anywhere in the world.

“In the village of Al-Dawayima (…), troops of the 8th Brigade massacred about 100 people,” Haaretz reported, though the number of the Palestinian victims later grew to 120. One of the soldiers who witnessed that horrific event testified before a government committee in November 1948: “There was no battle and no resistance. The first conquerors killed 80 to 100 Arab men, women and children. The children were killed by smashing their skulls with sticks. There wasn’t a house without people killed in it.”

The Haaretz report of nearly 5,000 words was filled with such painful details, stories of Palestinian elders who could not flee the Zionist invasion and ethnic cleansing of historic Palestine (1947-48), who were lined up against various walls and massacred; of an older woman being shot point-blank with four bullets; of other elders who were crammed inside a home and shelled by a tank and hand grenades; of many Palestinian women raped and other devastating stories.

Quite often, historians refer to the way that Palestine was ethnically cleansed from its native inhabitants by making this typical assertion regarding Palestinian refugees: “.. those who fled or were expelled from their homes.” The reference to the word “fled” has been exploited by supporters of Israel, by making the claim that Palestinians left Palestine on their own accord.

It was also Haaretz that, in May 2013, reported on how Israel’s founding father and first prime minister, David Ben Gurion, had fabricated that very history to protect Israel’s image. Document number GL-18/17028, which was found in the Israeli military archive, demonstrated how the story of the fleeing Palestinians — supposedly at the behest of Arab governments — was invented by the Israelis themselves.

This branch of “humanistic” Zionism, that of selective and self-serving morality, continues to exist to this day. As odd as this may seem, the editorial line of Haaretz itself is the perfect manifestation of this supposed Zionist dichotomy.

Sadly, as Haaretz’s latest revelations prove, Palestinians who chose to stay, due to their disability, age or illness were not spared and were massacred in the most horrifying way imaginable.

But something else struck me about the report: The constant emphasis by delusional Israeli leaders, then, that those who carried out the numerous grisly murders were but a few and that they hardly represent the conduct of an entire army. Note that the “army” in reference here are Zionist militias, some of whom operated under the title of “gang.”

Moreover, much emphasis was attached to the concept of “morality”, for example, “Israel’s moral foundations”, which, according to those early “ethical Zionists”, were jeopardized by the misconduct of a few soldiers.

“In my opinion, all our moral foundations have been undermined and we need to look for ways to curb these instincts,” Haim-Mosh Shapira, then-minister of immigration and health, was reported by Haaretz as saying during a meeting of the government committee.

Shapira, who represented the voice of reason and ethics in Israel at the time, was not contending with Israel’s right to be established on the ruins of colonized – and eventually destroyed – Palestine. He was not questioning the killing of tens of thousands of Palestinians or the ethnic cleansing of hundreds of thousands during the Nakba, either. Instead, he was referencing and protesting the excesses of violence which followed the Nakba, now that the future of Israel and the destruction of Palestine were assured.

This branch of “humanistic” Zionism, that of selective and self-serving morality, continues to exist to this day. As odd as this may seem, the editorial line of Haaretz itself is the perfect manifestation of this supposed Zionist dichotomy.

Needless to say, very few Israelis, if any, have been held accountable for the crimes of the past. Seventy-three years later, Palestinian victims continue to cry out for a justice that continues to be deferred.

One might find this conclusion a bit harsh. Zionist or not, one may protest that, at least, Haaretz has exposed these massacres and the culpability of the Israeli leadership. Such assumptions, however, are highly misleading.

Generation after generation of Palestinians, along with many Palestinian historians – and even some Israelis – have already known of most of these massacres. In its report, for example, Haaretz refers to “previously unknown massacres”, which include Reineh, Meron (Mirun) and Al-Burj. The assumption here is that these massacres were “unknown” – read unacknowledged by the Israelis themselves. Since Haaretz’s editorial line is driven by Israel’s own misconstrued historical narrative, the killings and destruction of these villages simply never happened – until an Israeli researcher acknowledged their existence.

Walid Khalidi, one of Palestine’s most authoritative historians, has been aware, along with many others, of these massacres for decades. In his seminal book, All That Remains: The Palestinian Villages Occupied and Depopulated by Israel in 1948, Khalidi speaks of Al-Burj, of which the only claim to existence is now “one crumbled house (…) on the hilltop.”

Palestinian claim of Israeli misconduct, though it may be verified or even filmed on camera, remains in question until an Israeli newspaper, politician or historian acknowledges its validity.

In reference to Meron (Mirun), the Palestinian historian discusses what remains of the village in detail and precision: “While the Arab section of the village was demolished, several rooms and stone walls still stand. One of the walls has a rectangular door-like opening and another has an arched entrance.”

This is not the first time when an Israeli admission of guilt, though always conditional, has been considered the very validation of Palestinian victimization. In other words, every Palestinian claim of Israeli misconduct, though it may be verified or even filmed on camera, remains in question until an Israeli newspaper, politician or historian acknowledges its validity.

Reclaiming history is not an intellectual exercise; it is a necessity, yes, with intellectual and ethical repercussions, but political and legal, as well. Surely, Palestinians do not need to re-write their own history. It is already written. It is time that those who have paid far more attention to the Israeli narrative abandon such illusions and, for once, listen to Palestinian voices, because the truth of the victim is a wholly different story than that of the aggressor.