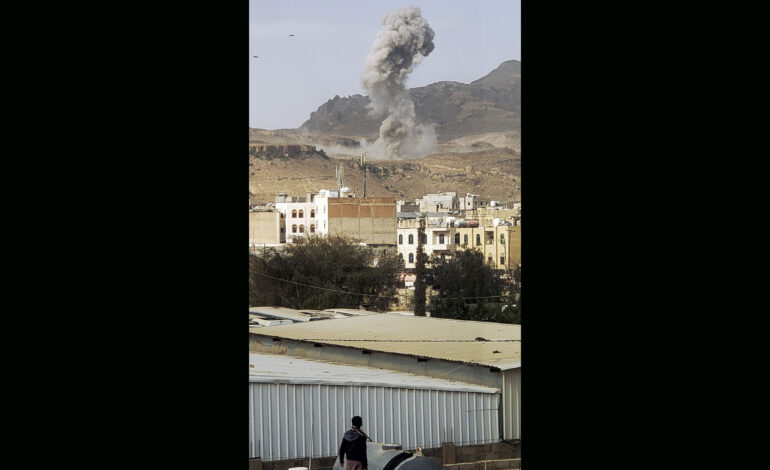 A man looks as dust rises from the site of a Saudi-led air strike in Sanaa, Yemen, Feb. 8. Photo: Riyam Mukhashaf/Reuters

ADEN — The Saudi-led coalition deployed newly formed units near Yemen’s Marib, where battles abated over the last week, according to military and government sources, as the warring sides hold their positions in the fight for energy-rich areas that has led to the war’s biggest escalation in years.

Last month the Houthi movement responded to losses in Shabwa and Marib at the hands of Emirati-backed forces with unprecedented assaults on alliance member the United Arab Emirates, dealing a fresh blow to stalled peace efforts.

Marib is vital because it is the internationally recognized government’s last stronghold in North Yemen and the country’s sole gas producing region, with one of its largest oilfields.

Three military sources said the UAE-backed Giants Brigade, southern Salafi Sunni Muslim fighters, have halted their advance in Marib after penetrating a Houthi cordon around the main city and securing the route to oil-rich Shabwa in the south.

In January the coalition sent the Giants Brigade to the main front lines after Houthi advances following years of stalemate, during which the UAE largely reduced its presence in 2019.

It was not immediately clear if the move paves the way for southern fighters to return to positions on the western coast, but it further weakens the hold of the Islamist Islah Party that had dominated pro-coalition units in Marib.

So far the new brigade has not entered Marib and is battling Houthi forces holding the Harad border crossing area between Yemen and Saudi Arabia that has been shut since 2015, when the coalition intervened in Yemen.

On Wednesday, President Biden and King Salman of Saudi Arabia spoke over the phone and discussed developments in the Middle East, including in Iran and Yemen. The two committed to “ensuring the stability of global energy supplies,” while Biden reiterated the U.S. commitment to support Saudi Arabia in defense from attacks by Yemen’s Houthi group, the White House said.

The dispute is largely seen as a proxy war between Saudi Arabia and Iran. The Houthis say they are fighting a corrupt system and foreign aggression. Last month, the Saudi-UAE coalition forces dropped a deadly air strikes in Yemen killing dozens, which renewed international focus on a war that has killed tens of thousands of people and caused a dire humanitarian crisis.

The community feels that Biden’s campaign promises have not been fulfilled at all. The Yemeni community was one of the main communities in Michigan that supported Biden, under the promise that he was going to stop the war – Kalid Kaid Shajra

Those killings in Yemen also sparked protests from the Yemeni American community in Dearborn, which blames foreign influence and power grab between warring factions that have made life for everyday Yemenis nearly impossible.

Yemeni community activist Kalid Kaid Shajra told The Arab American News that frustrated local Yemenis feel that enough is enough and that the Biden administration has broken its campaign promise to bring a resolution to the years-long war.

“There is not one side (in this war) that is completely right or completely wrong,” Shajra said. “The community feels that Biden’s campaign promises have not been fulfilled at all. The Yemeni community was one of the main communities in Michigan that supported Biden, under the promise that he was going to stop the war.”

In a statement carried by Al Arabiya TV, the coalition later warned people in the Houthi-controlled Yemeni capital Sanaa to avoid civilian locations used for military purposes during the next 72 hours while it strikes drone launch sites. Houthi military spokesperson Yahya Sarea said the group hit a military target at Abha airport with a Qasef 2 drone.

Shrapnel from the drone attack at midday fell inside airport grounds and some glass facades were damaged, it said.

Light injuries were sustained by two Saudi nationals and citizens of Bangladesh, Nepal, India, the Philippines and Sri Lanka.

U.S. National Security Advisor Jake Sullivan said in a statement condemning the “terrorist attack” that Washington was committed to supporting the kingdom in the defense of its people and territory.

The Houthis often launch attacks on Abha airport, which lies close to the Yemeni border in Saudi Arabia’s south, and other parts of the country with drones and missiles. Most attacks are intercepted, but a few people have been killed and several injured.

The coalition regularly carries out air strikes on what it says are Houthi military targets in Yemen. On Thursday it said it would take measures to neutralize the source of threats to civilians in accordance with international humanitarian law.

The UAE, a coalition member, twice in January said its forces destroyed a Houthi ballistic missile launch area in Yemen, after unprecedented drone and missile attacks on the UAE this year claimed by the Houthis.