The U.S. and some of its European allies are facing accusations of double standards for supporting sanctions and international war crimes investigations against Russia for its invasion of Ukraine while blocking them over Israeli military actions in the occupied Palestinian territories.

But pro-Israel groups in the U.S. have dismissed the allegations by accusing critics of exploiting Ukrainian suffering to draw false parallels.

Last month, Amnesty International called for the U.N. to impose targeted sanctions against Israel after joining other human rights groups in accusing it of breaching international law by practicing a form of apartheid and committing a crime against humanity in its “domination” of the Palestinians.

Palestinian officials and U.N. special rapporteurs on the occupied territories have also pressed for sanctions over Israeli land seizures in the West Bank, the blockade of Gaza and the large scale killing of Palestinian civilians.

While pressing for action against Russia, however, the U.S. and other governments have resisted similar measures against Israel.

On Tuesday, the U.S. secretary of state, Antony Blinken, told the U.N. Human Rights Council that it must send a “resolute message” to Vladimir Putin to stop an invasion that has destroyed schools, hospitals and residential buildings, and killed hundreds of civilians.

Sarah Leah Whitson, the former director of Human Rights Watch’s Middle East division, said there are clear parallels between Russian and Israeli violations of international law, including the committing of war crimes.

“These are the human rights abuses this council was created to stop,” he said. “If we cannot come together now, when will we come together?”

In the same speech, Blinken made point of calling ongoing U.N. Human Rights Council investigations into Israeli actions in the occupied territories “a stain on the council’s credibility” and called for them to be halted. The investigations have found Israel responsible for persistent “violations of the right to life” and other crimes.

Sarah Leah Whitson, the former director of Human Rights Watch’s Middle East division, said there are clear parallels between Russian and Israeli violations of international law, including the committing of war crimes.

“We see that not just the U.S. government but U.S. companies are falling over themselves to sanction and boycott anything that has an association with the Russian government,” she said. “Contrast that with the exact opposite when it comes to sanctioning Israel for its violations of international law to the point where American states are passing laws to punish Americans unless they promise never to boycott Israel. It’s very clear that the grounds for resisting sanctions on Israel, or even compliance with international law, is purely political.”

Lara Friedman, president of the Foundation for Middle East Peace, contrasted American support for sanctions against Russia with attempts in Congress to outlaw boycotts in the U.S. of Israel or its settlements in the Palestinian territories.

Critics compare Israeli military actions in the Palestinian territories with the Russian invasion of Ukraine, but pro-Israel groups dismiss the allegations as false parallels.

James Zogby, president of the Arab American Institute in Washington, compared the portrayal of Ukrainians throwing petrol bombs as heroic defenders of their territory to Palestinians characterized as terrorists or militants for resisting occupation and land seizures by Israel.

The U.S. is not alone in facing accusations of hypocrisy. The U.K. and Canada led calls for the international criminal court to investigate Russian war crimes in Ukraine. Last year, the two countries said the ICC should drop an investigation of Israel, in part on the grounds that Palestine is not a sovereign country, although it is recognized as a state by the U.N.

In Britain, the Labour MP Julie Elliott told parliament that there was a double standard when it comes to standing up for Palestinians.

“The Palestinians are looking to us to speak and act in the same terms,” she said. “We sanctioned Russia over Crimea and we are now likely to impose more sanctions, with which I wholeheartedly agree, yet Palestinians ask why we do nothing to end Israel’s occupation.” 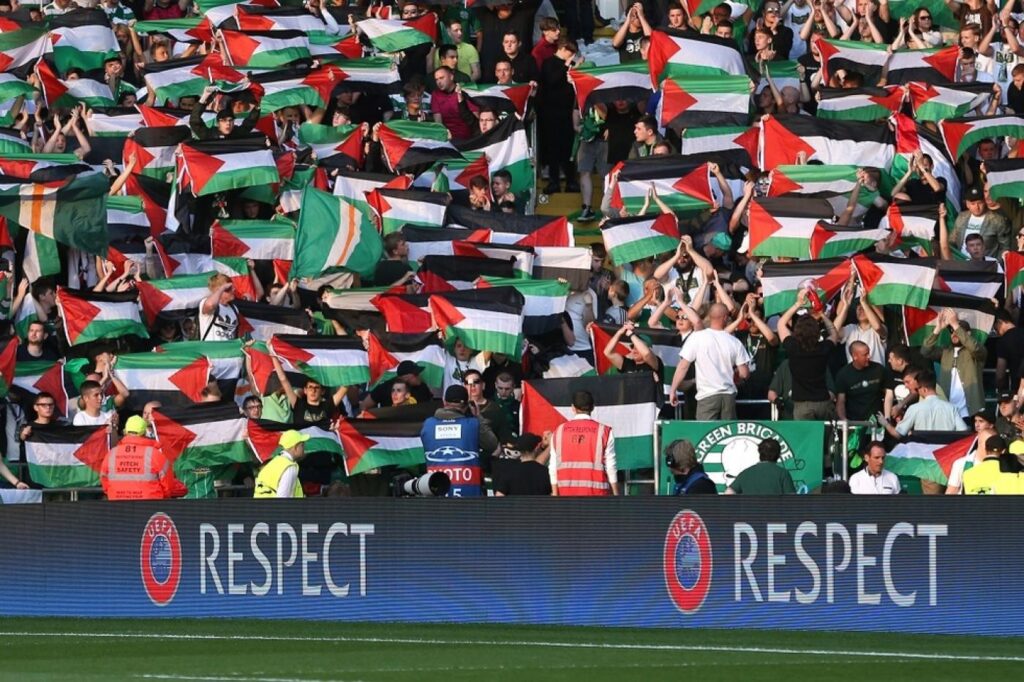 The Union of European Football Associations (UEFA) fined the Scottish Premier League team Celtic after its fans flew Palestinian flags at international games, saying that they were political symbols. Ukrainian flags have been widely flown at recent matches with the approval of footballing authorities.

The Union of European Football Associations (UEFA) fined the Scottish Premier League team Celtic after its fans flew Palestinian flags at international games, saying that they were political symbols. Ukrainian flags have been widely flown at recent matches with the approval of footballing authorities.

Israel’s supporters have pushed back by denying there is any parallel.

Jonathan Greenblatt, chief executive of the Anti-Defamation League, a prominent pro-Israel group based in New York, said the Israeli-Palestinian conflict is “a dispute over territory by two peoples who both have historic claims and connections.”

“To compare this complexity to Russia’s brute use of force against the sovereign & peaceful nation of Ukraine is to intentionally misrepresent the Israeli-Palestinian conflict, and is deeply insensitive to the security and humanitarian crisis confronting Ukrainians today,” he tweeted.

The Jerusalem Post also dismissed what it called the “disingenuous attempt to link Ukraine with Palestinians.”

“Weakness, however, does not automatically bestow virtue. In the Ukrainian-Russian conflict, it happens to be that Ukraine is both the wronged party and the weaker one. But that is not the case with the Palestinians.”

– Chris McGreal writes for Guardian U.S. and is a former Guardian correspondent in Washington, Johannesburg and Jerusalem. He is the author of American Overdose, The Opioid Tragedy in Three Acts