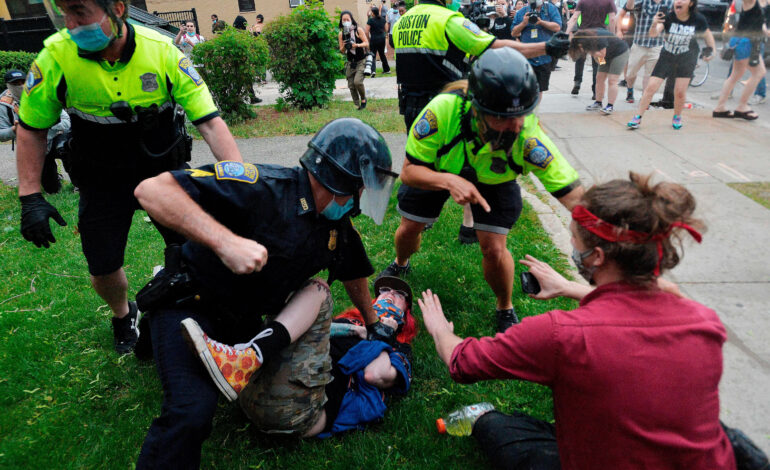 A police officer holds down a protester while another deploys pepper spray as they clash during a protest in Boston on May 29, 2020. Photo: Joseph Prezioso/AFP

A recently leaked memo from the Anti-Defamation League (ADL) reveals that the organization has paused its controversial law enforcement trainings of U.S. police with Israeli military and police forces in response to the movement for Black lives. It shows the power of the movement — which resonates years after its biggest mobilizations, and beyond the borders of this country.

It was not too long — less than two years ago in the summer of 2020 — that people moved by the cases of George Floyd, Breonna Taylor and so many others, participated in protests across the U.S. Despite the naked White supremacy of the Trump administration, mass protests in the streets drove a conversation about systemic racism and violent policing.

That wave of Black-led protest achieved so much. It confronted deeply entrenched commitments to policing and prisons, huge local budgets for police departments that were considered untouchable, well-organized police unions and a White House calling for the deployment of troops to repress the marches and rallies. The revolt shaped an urgent conversation that overcame those obstacles — and it made concrete gains.

And the wins went beyond the Black community. The Washington NFL and the Cleveland MLB teams removed and replaced racist mascots that caricature Indigenous peoples after facing years of campaigns demanding such action. The list goes on.

One of the victories that speaks to the ways that the struggle for Black freedom is tied to the freedom of other communities is the suspension of collaboration between U.S. police and Israeli forces.

Those trainings are extensive. It is not an exaggeration to say that every major urban police department in the country undertakes exchanges with Israel. Many small police departments also participate in these exchanges. The ADL is the lead organization facilitating such exchanges. Coordinating with law enforcement agencies, the ADL acts as a go-between for U.S. police and Israel, and it provides funds to support the trips.

The results have been disastrous for victims of both U.S. and Israeli police violence. Israeli military and police have shared tactics that they honed while controlling Palestinians living under Israel’s brutal military rule in the occupied Palestinian West Bank and East Jerusalem with U.S. police — practices that the whole world saw in the police brutality against the 2020 protests. Israel has also shared its weapons, such as the “skunk truck” — a vehicle that sprays putrid liquid that is hard to wash off onto protesters — which St. Louis police purchased after the 2014 Ferguson uprising. Indeed, in May of last year when Israeli police in East Jerusalem violently cleared Palestinian worshippers from the Al Aqsa Mosque during Ramadan and attacked Palestinian residents of the city targeted by Israel for removal from their homes, their methods looked very familiar to observers here in the U.S.

The fight is not over. While the ADL suspended the training program, it has not ended it. 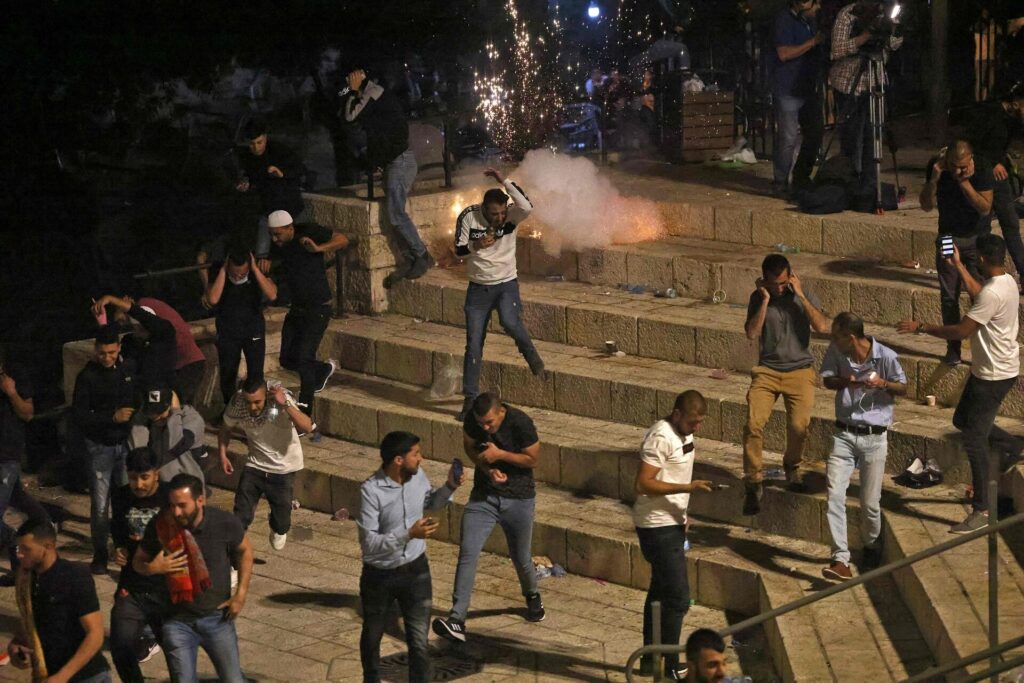 Israeli police forces attack and clear out protesters and worshipers at the Al-Aqsa compound in Jerusalem, May 2021. Wire photo

Israeli military and police have shared tactics that they honed while controlling Palestinians living under Israel’s brutal military rule in the occupied Palestinian West Bank and East Jerusalem with U.S. police — practices that the whole world saw in the police brutality against the 2020 protests.

Mobilizations asserting that Black lives matter forced countless people and institutions to answer the question: What side are you on — that of Black people demanding justice, or of police carrying out violence in our communities each day and repressing protests?

The ADL claims to be a civil rights organization. Yet its central practices include attacking Palestinians and critics of Israel. The ADL has presented itself as an expert on counterterrorism and has advised law enforcement on the hallmark “war on terror” surveillance programs — which have led to serious attacks on civil rights — particularly of Muslims and people of Middle Eastern background. The very police departments with which the ADL collaborates so closely have been at the forefront of attacking the civil rights of Black and Indigenous folks, and other people of color. The conflict between the ADL’s stated mission and its actual practice is clear.

That tension led to an internal evaluation of the police trainings with Israel: How could the ADL maintain them as more people raised their voices against both racist policing and Israeli violence against Palestinians?

The ADL’s leaked internal memo shows that it did pause its trainings — quietly — in hopes that no one would notice. However, the fight is not over. While the ADL suspended the training program, it has not ended it. The ADL was compelled to acknowledge how out of step its work is with public momentum in solidarity with the targets of police violence — albeit privately. Ultimately, it is on the public to demand that these programs stop entirely.

The 2020 uprisings pushed the goal of suspending the police trainings across the finish line, but activists worked for years to do community education and protest to call attention to them. The work of campaigns like Deadly Exchange and organizations like Students for Justice in Palestine, Jewish Voice for Peace, BYP 100 and the Movement for Black Lives laid a foundation for challenging the police exchanges that found a new vitality in the swelling of the mobilizations.

As we demand an end to the programs altogether, we can take a lead from Durham, North Carolina, whose City Council outlawed the police exchanges in 2018. Activists there built a multiracial and multifaith coalition that called attention to police trainings with Israel and Israeli brutality against Palestinians in particular, and framed rights for Palestinians in the context of the advancement of human rights more generally. The coalition won a resolution by the City Council that “opposes international exchanges with any country in which Durham officers receive military-style training.”

The work of the movement for Black lives is far from over. Justice must include the fullness of our communities, and it must go beyond our local communities too. Indeed, and our scope for racial justice must extend beyond this country. Events and institutions that may seem far away are, in reality, intimately  connected with our communities. There are ties that bind us extending beyond borders of U.S. military aid and weapons sent to abuse our relatives in Palestine and elsewhere around the world, and of ties between Israeli security forces and U.S. police. Ending police exchanges will help build a world where our ties are of cooperation, solidarity and common pursuits for justice, rather than racism, violence and repression.

This article originally appeared in Truthout and has been edited for style: truthout.org/articles/

Copyright © Truthout. May not be reprinted without permission.

— Khury Petersen-Smith is the Michael Ratner Middle East Fellow at the Institute for Policy Studies.