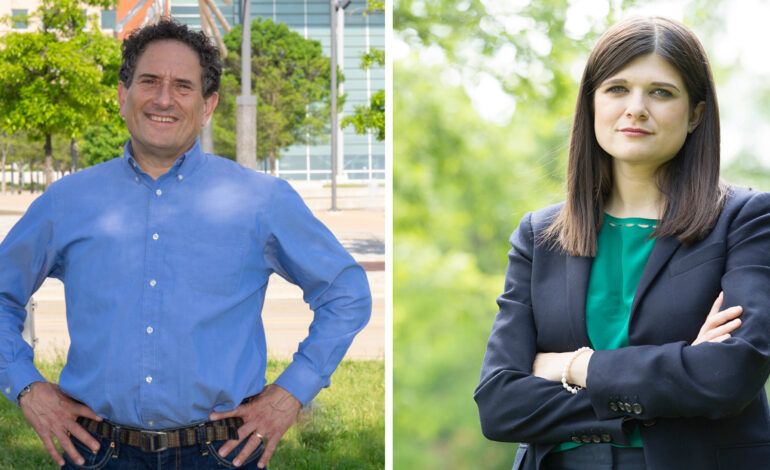 As primary races for Congressional seats in Michigan ramp up, U.S. Reps. Andy Levin (D-Bloomfield Township) and Haley Stevens (D-Livonia) are in a rare contest to represent the same district.

Michigan lost a seat in the U.S. House of Representatives after the latest Census revealed its population has declined over the last 10 years. This means Levin and Stevens are now competing for the heavily Democratic-leaning 11th Congressional District.

That district, which covers Oakland County communities like Bloomfield Hills, Pontiac and more, is a newly formed district created by the state’s Independent Citizens Redistricting Commission. Both representatives reside in that area, though Stevens has had to move to the newly drawn district in order to run for it.

The two debated each other at a community forum in April. One point of debate was the monetary support and backing Stevens has received from the pro-Occupation, Zionist lobby AIPAC.

AIPAC’s political action committee has spent more than $300,000 on Stevens, more than the PAC has directed to any other candidate in this year’s race. Stevens has also received and endorsement from the Democratic Majority for Israel PAC.

Support for the occupation

AIPAC has a noted history of propagating right-wing views on the current internationally-recognized illegal occupation of Palestinian lands, by lobbying for Israel’s government and its agenda, and its bolstering of American candidates who justify oppressive human rights practices as a defensive tactic against threats from Palestinian resistance groups.

Those practices have been recently meticulously detailed by independent human rights organizations that the U.S. itself relies on for information on human rights abuses elsewhere in the world, like Amnesty International, whose expansive report on the matter shows that the Israeli government’s actions in occupied Palestine amount to crimes of apartheid.

Levin, a Jewish American scion of an influential political family, has been called “arguably the most corrosive member of Congress to the U.S.-Israel relationship” by former AIPAC President David Victor, who has actively backed Levin’s opponent.

Levin, for his part, supports U.S. funding for the Israeli military, but has authored legislation that would restrict how Israel spends U.S. defense assistance so that it would not be used to uphold the West Bank occupation.

He and few other Democrats have expressed concerns over continued settlement projects as detriment to peace in the region and is broadly in support of a two-state solution. Though Levin, like the liberal group J Street, has shied away from descriptions like “apartheid”, he has vocally objected to Israeli demolitions of Palestine property and displacements.

AIPAC has historically supported Democratic and Republican candidates who have remained steadfast supporters of the occupation in the face of evidence of human rights violations. This year, that also includes Democratic leaders like Nancy Pelosi.

Stevens has a history of good relations with the powerful lobby. This includes an AIPAC-sponsored trip to occupied lands in 2019, which she called a “rich experience”, and one that reminded her of being in “summer camp.”

Describing the situation in Gaza, on which Israel imposes a crippling economic blockade and yearly military campaigns, U.N. Secretary-General António Guterres has said, “If there is a hell on earth, it is the lives of children in Gaza today.”

The U.N. says that last year, unemployment in Gaza reached 50.2 per cent. This is on top of extreme poverty and a barren infrastructure, destroyed by last year’s Israeli bombardment.

“In the West Bank, including East Jerusalem, the situation is characterized as a protracted protection crisis,” says a recent UNRWA report. “The impact of the Israeli occupation continues to be felt on a daily basis by over 877,0007 Palestine refugees registered with UNRWA, as well as by the entire Palestinian population.”

AIPAC has historically supported Democratic and Republican candidates who have remained steadfast supporters of the occupation in the face of evidence of human rights violations, evidence originating from Palestinian, Israeli and international rights organizations. This year, that also includes members of the Democratic leadership like Nancy Pelosi.

Stevens’ campaign did not respond to an inquiry by The Arab American News.

AIPAC’s support also puts the Democrats in an uncomfortable position given the party’s unequivocal position against supporters of former President Trump’s false claims of election fraud.

AIPAC has endorsed dozens of Republicans who have claimed the 2020 election that gave President Biden his victory was fraudulent. Some of them even voted against certifying the 2020 election as members of Congress.

That support for Trump’s claims runs deep, and the lobby has positioned itself specifically with Trump’s wing of the Republican Party. For example, AIPAC did not initially endorse U.S. Rep. Liz Cheney (R-WY), who rejected Trump’s claims of a stolen election but is otherwise a staunch supporter of Israel, but did so after some pressure.

Trump’s campaign and others lost dozens of lawsuits in courts across the country filed to challenge the results of the election, which were deemed accurate by many Republican officials as well, as in the case of Georgia.

“I think it’s hard to say what (AIPAC’s) mission is any more,” Levin told The Arab American News. “They claim to be singularly focused on pro-Israel candidates, but then they decide not to support Liz Cheney, who seems like is their brand of pro-Israel, but she doesn’t support Trump’s ‘Big Lie.’

“And then they did endorse and funnel money to 37 Republicans that do support Trump’s Big Lie; and I’m talking about people like Scott Perry and Ronny Jackson and Jim Jordan, people actively involved, even now, in an effort to undermine a peaceful transfer of power and legitimacy of the 2020 election.”

I think it’s hard to say what (AIPAC’s) mission is any more. They claim to be singularly focused on pro-Israel candidates, but then they decide not to support Liz Cheney, who seems like is their brand of pro-Israel, but she doesn’t support Trump’s ‘Big Lie’ – U.S. Rep. Andy Levin (D-Bloomfield Township)

Stevens’ campaign seems to have gained one of the biggest monetary support from AIPAC in terms of bundling campaign contributions and paid events.

“I take that to mean that if you step out for the full human and political rights of  Palestinians, as well as Israelis, be prepared for us to silence you,” Levin said.

Stevens has so far out-raised Levin by about $1.5 million in this election.

At the debate in Pontiac last month, Levin asked Stevens to explain this support from AIPAC. Reading from a prepared statement, Stevens said AIPAC has also supported Democratic leadership and 20 members of the House Progressive Caucus.

“This endorsement is solely about members of Congress supporting Israel and I am proud to unequivocally support the Jewish state,” she said.

Levin has also distinguished himself from his opponent on other progressive-favored issues, like the environment and education.

“There are 27 senators and representatives who have backed all 10 Green New Deal bills — I’m one of them,” Levin said at the debate. “My opponent hasn’t backed any of them.”

The Green New Deal purports to accelerate the transition to clean energy sources.

Levin does enjoy support from progressive Democratic groups, as well as Jewish leaders and orgs, including an ongoing strong relationship with the local Arab American population and local PACs like the Arab American Political Action Committee (AAPAC).

Early polls have also showed Levin leading with voters of color, union households and women, while Stevens drew higher amounts of support from White voters and men. Stevens has also taken moderate to conservative stances on issues like minimum wage and prescription drug costs, something Levin challenged at the debate.

The newly drawn District 11 has a substantial Jewish population, but polls suggest that Jewish American voters are by no means singularly focused on Israeli/Palestinian issues, with top tier issues being climate change, voting rights and the economy.

A poll from 2021 by the Jewish Electorate Institute showed that only 4 percent cite Israel as one of the top two issues that Biden and Congress should focus on, but 62 percent say that they are emotionally attached to Israel.

“Jewish, Arab Americans and all manners of voters care about (climate change, labor rights, education) and I’m going to continue being something which to me couldn’t be more Jewish, which is fighting for a multi-racial coalition of all working people to fight for the rights of everyone,” Levin said.