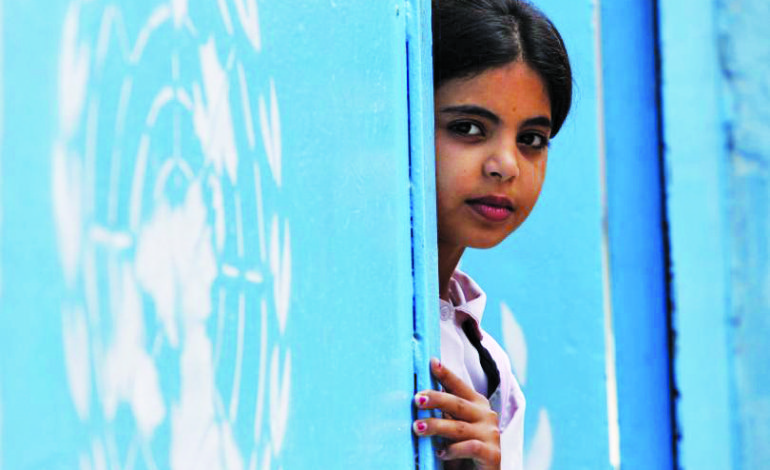 A Palestinian refugee girl peers from behind an UNRWA school door at Ain al-Hilweh refugee camp in southern Lebanon in 2011. Photo: UNRWA

Palestinians are justifiably worried that the mandate granted to the United Nations Agency for Palestinian refugees, UNRWA, might be coming to an end. UNRWA’s mission, which has been in effect since 1949, has done more than provide urgent aid and support to millions of refugees. It was also a political platform that protected and preserved the rights of several generations of Palestinians.

Though UNRWA was not established as a political or legal platform per se, the context of its mandate was largely political, since Palestinians became refugees as a result of military and political events — the ethnic cleansing of the Palestinian people by Israel and the latter’s refusal to respect the Right of Return for Palestinians as enshrined in U.N. resolution 194 (III) of December 11, 1948.

“UNRWA has a humanitarian and development mandate to provide assistance and protection to Palestine refugees pending a just and lasting solution to their plight,” the U.N. General Assembly Resolution 302 (IV) of December 8, 1949 read. Alas, neither a “lasting solution” to the plight of the refugees, nor even a political horizon has been achieved. Instead of using this realization as a way to revisit the international community’s failure to bring justice to Palestine and to hold Israel and its U.S. benefactors accountable, it is UNRWA and, by extension, the refugees that are being punished.

In a stern warning on April 24, the head of the political committee at the Palestinian National Council (PNC), Saleh Nasser said that UNRWA’s mandate might be coming to an end. Nasser referenced a recent statement by the U.N. body’s Commissioner-General Philippe Lazzarini about the future of the organization.

Equally important is the political nature of the organization. The very existence of UNRWA means that there is a political issue that must be addressed regarding the plight and future of Palestinian refugees.

Lazzarini’s statement, published a day earlier, left room for some interpretation, though it was clear that something fundamental regarding the status, mandate and work of UNRWA is about to change. “We can admit that the current situation is untenable and will inevitably result in the erosion of the quality of the UNRWA services or, worse, to their interruption,” Lazzarini said.

Commenting on the statement, Nasser said that this “is a prelude to donors stopping their funding for UNRWA.”

The subject of UNRWA’s future is now a priority within the Palestinian, but also Arab political discourse. Any attempts at canceling or redefining UNRWA’s mission will pose a serious, if not an unprecedented challenge for Palestinians. UNRWA provides educational, health and other support for 5.6 million Palestinians in Jordan, Lebanon, Syria, the Gaza Strip and the West Bank, including East Jerusalem. At an annual budget of $1.6 billion, this support, and the massive network that has been created by the organization, cannot be easily replaced.

Equally important is the political nature of the organization. The very existence of UNRWA means that there is a political issue that must be addressed regarding the plight and future of Palestinian refugees. In fact, it is not the mere lack of enthusiasm to finance the organization that has caused the current crisis. It is something bigger and far more sinister.

A combination picture shows a doctor examining a child in Baqaa camp, near Amman, Jordan, in this handout picture believed to be taken in 1969, and a doctor examining a child at a health center at Baqaa Palestinian refugee camp, near Amman, Jordan, September 29, 2019. Photo: UNRWA/Handout via Reuters (L), Muhammad Hamed/Reuters

In June 2018, Jared Kushner, son-in-law and advisor to former U.S. President Trump, visited Amman, Jordan, where he, according to the U.S. Foreign Policy magazine, tried to persuade Jordan’s King Abdullah to remove the refugee status from 2 million Palestinians currently living in the country.

This and other attempts have failed. In September 2018, Washington, under the Trump administration, decided to cease its financial support of UNRWA. As the organization’s main funder, the American decision was devastating, because about 30 percent of UNRWA’s money comes from the U.S. alone. Yet, UNRWA hobbled along by increasing its reliance on the private sector and individual donations.

Though the Palestinian leadership celebrated the Biden administration’s decision to resume UNRWA’s funding on April 7, 2021, a little caveat in Washington’s move was largely kept secret. Washington only agreed to fund UNRWA after the latter agreed to sign a two-year plan, known as the Framework for Cooperation. In essence, the plan effectively turned UNRWA into a platform for Israel and American policies in Palestine, whereby the U.N. body consented to U.S. — thus Israeli — demands to ensure that no aid would reach any Palestinian refugee who has received military training “as a member of the so-called Palestinian Liberation Army”, other organizations or “has engaged in any act of terrorism.” Moreover, the Framework expects UNRWA to monitor “Palestinian curriculum content.”

Though UNRWA was never an ideal organization, it has indeed succeeded in helping millions of Palestinians throughout the years, while preserving the political nature of their plight.

By entering into an agreement with the U.S. Department of State, “UNRWA has effectively transformed itself from a humanitarian agency that provides assistance and relief to Palestinian refugees, to a security agency furthering the security and political agenda of the U.S., and ultimately Israel,” BADIL Resource Center for Palestinian Residency and Refugee Rights noted.

Palestinian protests, however, did not change the new reality, which effectively altered the entire mandate granted to UNRWA by the international community nearly 73 years ago. Worse, European countries followed suit when, last September, the European parliament advanced an amendment that would condition EU support of UNRWA on the editing and rewriting of Palestinian school textbooks that, supposedly, “incite violence” against Israel.

Instead of focusing solely on shutting down UNRWA immediately, the U.S., Israel and their supporters are working to change the nature of the organization’s mission and to entirely rewrite its original mandate. The agency that was established to protect the rights of the refugees is now expected to protect Israeli, American and Western interests in Palestine. 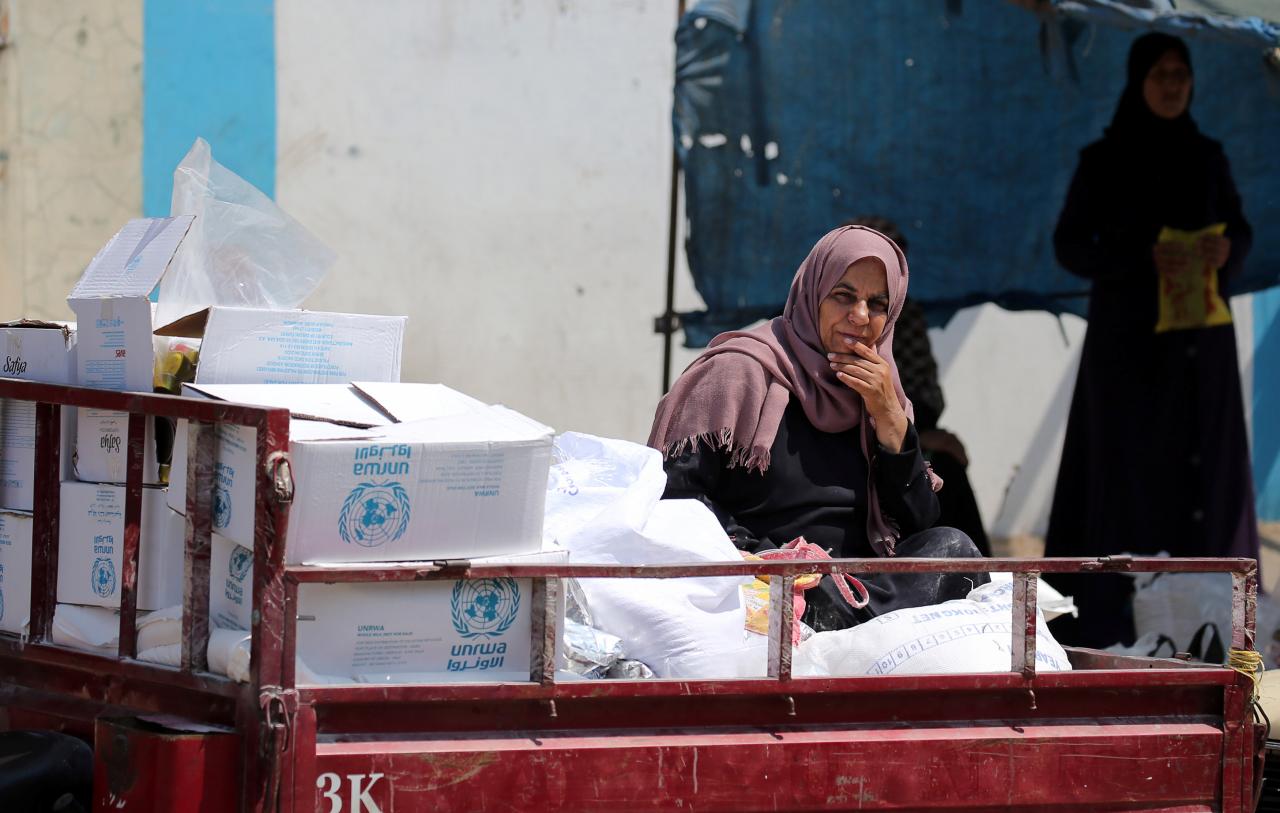 A Palestinian woman sits in a motorised vehicle loaded with aid, outside a distribution center run by the United Nations Relief and Works Agency (UNRWA), in Khan Younis in the southern Gaza Strip September 4, 2018. Photo: Ibraheem Abu Mustafa/Reuters

Though UNRWA was never an ideal organization, it has indeed succeeded in helping millions of Palestinians throughout the years, while preserving the political nature of their plight.

Though the Palestinian Authority, various political factions, Arab governments and others have protested the Israeli-American designs against UNRWA, such protestations are unlikely to make much difference, considering that UNRWA itself is surrendering to outside pressures. While Palestinians, Arabs and their allies must continue to fight for UNRWA’s original mission, they must urgently develop alternative plans and platforms that would shield Palestinian refugees and their Right of Return from becoming marginal and, eventually, forgotten.

If Palestinian refugees are removed from the list of political priorities concerning the future of a just peace in Palestine, neither justice nor peace can possibly be attained.