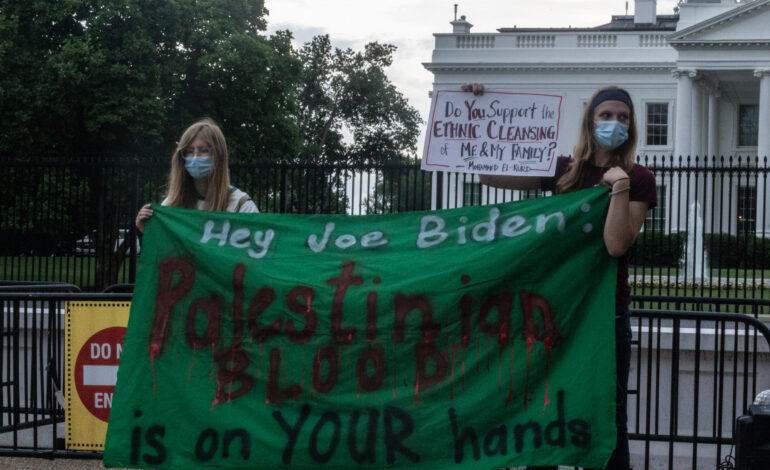 Protesters hold a sign outside the White House, June 3, 2021, on the occasion of Israeli Defense Minister Benny Gantz's visit to Washington D.C., in part to ask for billions to support military occupation efforts in Palestine. Photo: Laura Albast

Jamea Shalout’s home in Rafah, Gaza consists of two rooms built of cinder blocks and cement. In the room where I met her in late 2019, the only personal belongings visible were the sleeping mats that the family lays out at night and a pile of blankets. Across a dirt courtyard, there is a small kitchen and bathroom — with cinderblock walls, dirt floors and a partial roof made from corrugated tin. Water for the family is delivered into the holding tanks on the family’s property. One room in the house receives electricity from a small solar panel, but the rest of the house does not have power. At night, Jamea shares her room with six family members.

Everyone deserves to live in safety and peace and have their rights respected; this includes both Palestinians and Israelis. Unfortunately, Palestinians in Gaza have lived for 15 years under an Israeli imposed blockade that has stripped them of their rights and dignity. The blockade was first imposed on Gaza in 2006 and further tightened since 2007. It effectively limits most exports and imports to and from Gaza, restricts the movement of Palestinians from Gaza and bans access to Gaza by nearly all nonresidents.

Congress could take action to bring change by demanding that Israel end the blockade; and while 31 House members signed on to a February 2020 letter authored by Representatives Mark Pocan and Debbie Dingell calling to restore all U.S. funding for humanitarian aid in Gaza and urging an end to the blockade, most members of Congress instead support the continuation of the blockade, regardless of its human costs. They remain willfully oblivious to those costs borne by people like Jamea.

Jamea is one of many paying the cost of both the economic and employment crisis in Gaza. According to the Palestinian Central Bureau of Statistics, in 2021, the unemployment rate in Gaza was more than 26 percent. Among women, the unemployment level increases to more than 43 percent. But unemployment is only one part of the humanitarian catastrophe created by the blockade. In the private sector, 29 percent of workers earned less than the minimum wage (about $420 per month) in 2021, with monthly earnings for those employed in the Gaza Strip averaging approximately $190 per month. This is not enough to provide for basic needs and helps explain why more than 80 percent of the population rely on outside assistance to survive.

Nobody in Jamea’s family has a steady job, though some family members find seasonal employment picking dates. They also have a horse and cart that they use to gather plastic for recycling, but this brings in no more than one or two dollars per day as income — not enough to meet the needs of all family members.

The crises in Gaza link directly to the blockade, which, among other things, limits imports and exports and restricts Palestinian movement. Repeated Israeli attacks on Gaza — which have destroyed electrical, water and sanitation, and other basic infrastructure — have furthered economic decline, while the blockade also stops rebuilding and recovery. This reality is neither ethical nor sustainable. 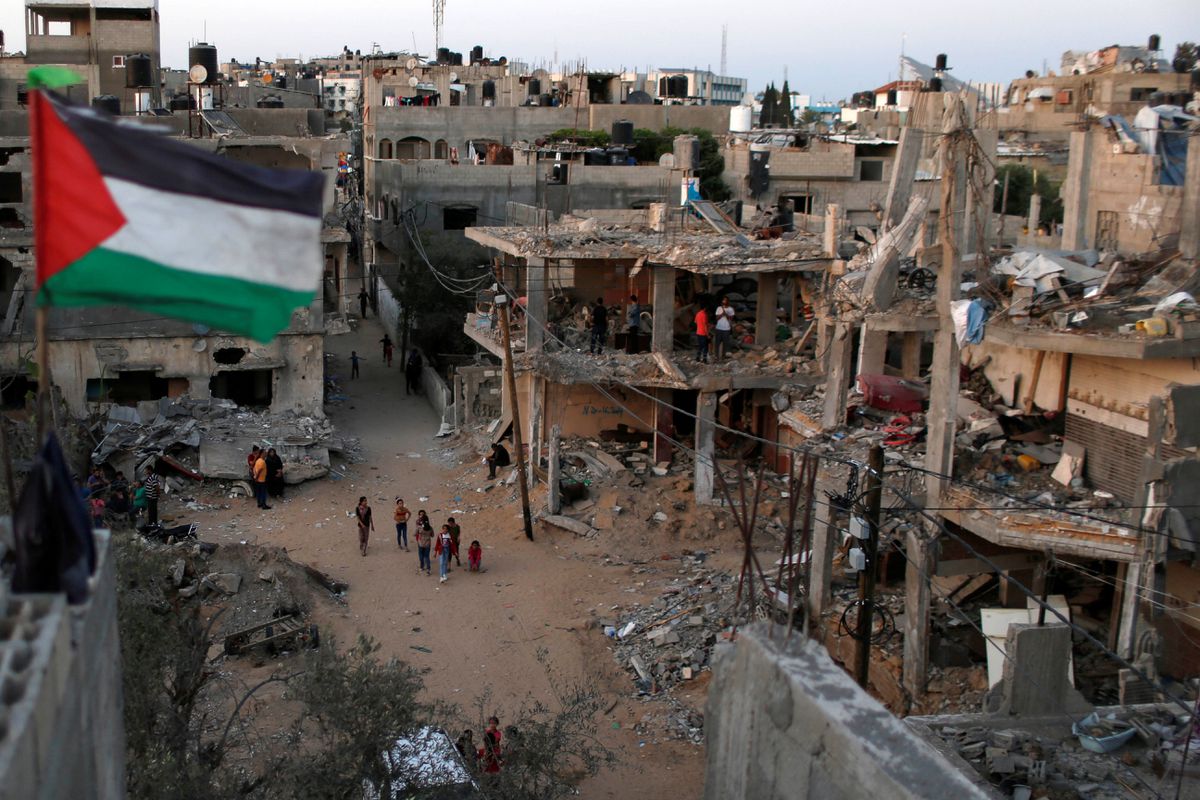 A Palestinian flag flies as the ruins of houses, which were destroyed by Israeli air strikes, are seen in the Gaza Strip, May 25. Photo: Mohammed Salem/Reuters

The results of the AFSC survey point to a broader change in narrative that is occurring as criticism of Israel’s treatment of Palestinians gains mainstream acceptance. But this is not yet reflected at a political level.

Repeated Israeli attacks on Gaza have furthered economic decline, while the blockade also stops rebuilding and recovery. This reality is neither ethical nor sustainable.

The poll found majority opposition among women, people ages 18-45 and people over 65 and indicated that a plurality of voters across demographics and age groups opposed the continuation of the blockade. Respondents were a representative sample of U.S. adults across the political spectrum.

These numbers are important because they demonstrate the disconnect that exists between political positions and public opinion. The public cares about what happens to Jamea and thousands of others in her position. Those of us calling for change in U.S. policy related to Gaza often hear from members of Congress and the Biden administration that our positions are marginal and not supported by the broader public. These results contradict conventional wisdom and instead show that, if provided basic information, most people support ending the Gaza blockade.

The results of the AFSC survey point to a broader change in narrative that is occurring as criticism of Israel’s treatment of Palestinians gains mainstream acceptance. But this is not yet reflected at a political level. This shift is reflected in the recently issued Amnesty International report which details how Israel’s treatment of Palestinians constitutes apartheid. The report notes that “…Israel has imposed a system of oppression and domination over Palestinians wherever it exercises control over the enjoyment of their rights — across Israel and the [Occupied Palestinian Territories] and with regard to Palestinian refugees.”

The blockade of Gaza and resulting violations of Palestinians rights is not separate from that apartheid reality. The blockade is a key system of control that facilitates apartheid’s continuation and it is time for the blockade to end. Public opinion supports a change in policy. Politicians need to catch up. We cannot continue to deny the rights of Jamea, her family and others living under blockade in Gaza.

Copyright © Truthout. May not be reprinted without permission.

This story has been edited for style.

— Michael Merryman-Lotze is the director of the Middle East program for the American Friends Service Committee (AFSC). He coordinates AFSC’s Middle East-focused advocacy and policy programming, working closely with AFSC staff in Amman, Jerusalem, the West Bank, Gaza and throughout the U.S.