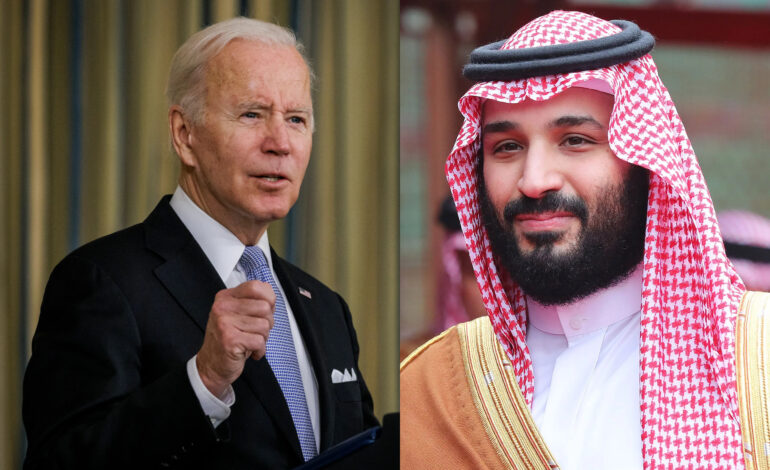 WASHINGTON, D.C. — The White House confirmed dates and some details on President Biden’s July trip to the Middle East, including Saudi Arabia and Israel, amid concerns over the human rights records of both countries.

Human rights advocates are critical of Biden’s July 13-16 trip, which will include a meeting with the kingdom’s Crown Prince Mohammed bin Salman, who has been directly connected with the gruesome, coordinated murder of dissident journalist Jamal Khashoggi in 2018.

Previously, and most likely due to his competitor former President Trump’s cozy relationship with the kingdom, Biden had called the country a “pariah” state.

He had also approved the release of a U.S. intelligence report which concluded that Salman had approved a plot to “capture or kill” Khashoggi.

The journalist was allegedly lured to the Saudi Consulate in Istanbul, where he was killed and hacked into pieces. The U.S., under Biden, imposed bans on dozens of Saudi officials for the writer’s death.

But Biden’s trip to the oil-rich Gulf country is yet another testament to its political power in the region and its uneasy relationship with oil-dependent countries like the U.S.

Little criticism has come out of the Democratic Party over the trip. The yielding to the country’s economic interests has echoes with Trump, who was typically more direct about economic basis of the U.S.-Saudi relationship.

“You had people wanting to cut off Saudi Arabia … I don’t want to lose them,” he told a rally of supporters back in 2019.

After calls for a trade embargo following Khashoggi’s death, Trump said, “If we foolishly cancel these contracts, Russia and China would be the enormous beneficiaries and very happy to acquire all of this newfound business.”

Biden is now expressing fears of alienating the kingdom, though in less brazen term than his predecessor. The fear comes amid soaring gas prices and divestment from Russian oil during its invasion of Ukraine. 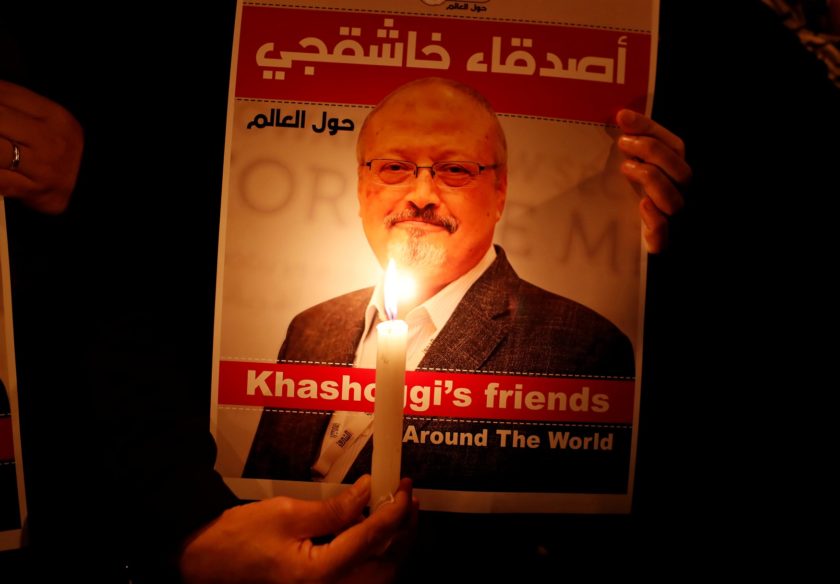 A demonstrator holds a poster with a picture of Saudi journalist Jamal Khashoggi outside the Saudi Arabia consulate in Istanbul, Turkey, Oct. 25, 2018. Photo: Reuters/File

Human rights is always a part of the conversation. … A lot of these conversations, we do hold them behind closed doors, and we think engagement — and that is the best way to get results. — White House official

A Financial Times editorial outlined the malignant relationship with the kingdom, which also has a long and oppressive women’s rights record, with a warning:

“The rush to secure alternative supplies to Russian oil and gas (Western countries) should avoid replicating the mistakes of the past — and not give the likes of (Mohammed bin Salman) a free ride.”

The Hill reported this week a senior White House official saying that though the administration sought accountability for Khashoggi’s death, it did not seek to “rupture” relations with the kingdom completely.

The official also called the crown prince “critical” to extending a cease-fire agreement until at least August in Yemen’s catastrophic seven-year civil war, The Hill reported.

“Human rights is always a part of the conversation. … A lot of these conversations, we do hold them behind closed doors, and we think engagement — and that is the best way to get results,” the official said.

Biden is expected to meet with leaders from other Gulf countries in the region, with topics of discussion including the U.S. and its Gulf allies’ antagonistic front against Iran.

The White House, in an attempt to distance the brutal record of the country’s crown prince and Biden, is emphasizing that the president’s main point of contact will be the ailing 86-year-old King Salman, though it acknowledged Biden’s will “see” MbS on the visit.

MbS has made positive gestures towards tightening ties with Israel, joining a movement among other Arab counties to establish military and economic ties with the government currently leading a system of occupation and apartheid in Palestine.

Though Saudi Arabia and Israel do not have official diplomatic relations, they have shared security ties over a common rivalry with Iran.

🇸🇦 “His name will continue to haunt you."

“We are so proud of our freedoms that allowed us to come in front of the Saudi embassy to remind them that while you (tried) to silence Jamal Khashoggi, today is a different message,” said Nihad Awad of the Council on American Islamic Relations (CAIR). “His name on the main street in front of your embassy will remind you every day. Whenever you want to mention your address, you’ll have to utter his name.”

Biden’s trip to Israel is sure to be pockmarked with a similar shoddy human rights record of a key ally of the U.S. administration.

That meeting, the first for Biden as president, will occur with a backdrop of calls for a thorough and independent investigation into the Israeli army’s involvement in the assassination of Palestinian Al-Jazeera journalist Shireen Abu Akleh.

Witness on the ground have categorically said Israeli soldiers shot at Abu Akleh and international media investigations have led Israel to concede that the bullet that killed Abu Akleh may have come from its occupation troops, who were raiding a Palestinian refugee camp.

Two bipartisan senators, as well as dozens of House members, have pushed the Biden administration into investigating the killing of the U.S. citizen and celebrated Palestinian journalist.

Biden wants a nice "atmosphere" when he visits the israeli apartheid regime because his image is more important than israeli atrocities https://t.co/xGXIl99uBw

Israel’s government has of course seen a number of defeats in its PR campaign to put a gloss over its brutal military occupation of Palestine. This includes damning reports by independent rights organizations like Amnesty International, whose reports on violations in other parts of the world are routinely cited by the U.S. foreign policy apparatus.

An Israeli official has reportedly said the government will avoid any incidents that could bring negative attention to the country and potentially embarrass Biden.

As always, the Biden administration has reaffirmed its “ironclad” support for Israel’s “security” ahead of the trip.

White House officials have said Biden will also travel to the West Bank to visit with Palestinian President Mahmoud Abbas and other Palestinian leaders and reaffirm the U.S. commitment to a two-state solution between the Israelis and Palestinians.