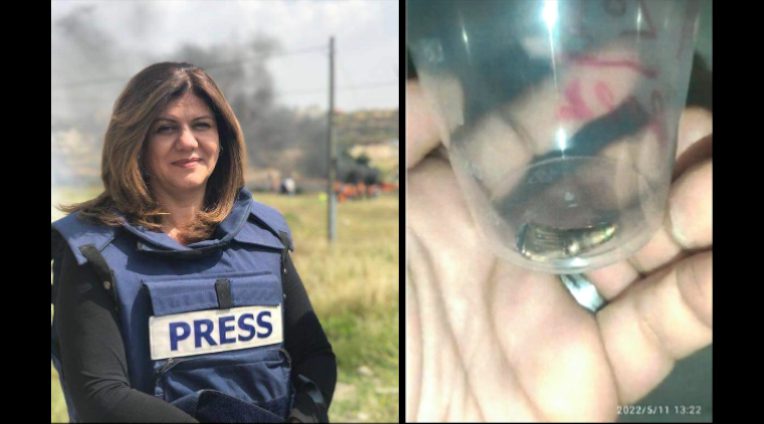 PALESTINE — A photo of the bullet that killed renowned Palestinian American journalist Shireen Abu Akleh has been recovered by the news agency she long worked for.

Al Jazeera said Thursday it had obtained an image of the bullet used to kill the veteran journalist  in the occupied West Bank last month while covering an Israeli occupation forces raid on the Jenin refugee camp with fellow journalists.

Eyewitness accounts confirmed the journalist was killed by the Israeli soldiers, who were the only ones in the area besides the team of journalists and bystanders at the time of her death. Israeli forces have a long history of targeting journalists covering the occupation of Palestine.

Al Jazeera said that according to ballistic and forensic experts, the U.S.-manufactured green-tipped 5.56mm caliber bullet was designed to pierce armor and is used in an M4 rifle, routinely used by Israeli forces.

The round was extracted from the journalist’s head. Abu Akleh was wearing a helmet and a bulletproof vest that clearly read “PRESS” while she was covering the raid on a home of a young man whose brother Israeli forces had killed earlier. An autopsy showed the bullet was shot at the lower side of her head and then bounced off inside her helmet before entering her head.

A former Jordanian major general told Al Jazeera the weapon and round used to kill Abu Akleh are regularly carried by Israeli forces.

“This M4 and this munition is used by the Israeli army,” said Fayez al-Dwairi. “It is available and used by the units. I cannot say the whole unit, or most of the soldiers, but they use it.”

Ballistic and forensic expert say the U.S.-manufactured green-tipped 5.56mm caliber bullet was designed to pierce armor and is used in an M4 rifle, routinely used by Israeli forces.

But independent investigations, like the one conduct by the Israeli human rights group B’Tselem, showed the spot where Abu Akleh and her colleagues were positioned was outside of the line of fire from the Palestinian fighters shown in the clip, making it impossible for them to have shot her.

Israel later conceded that one of its soldiers may have shot Abu Akleh, but has refused to conduct any thorough investigation to bring the murderer to justice.

The bullet that killed Abu Akleh now remains with the Palestinian government.

At her funeral, Israeli officers attacked pallbearers, which almost caused them to drop her coffin, an incident that caused international outrage. Despite finding that there had been police misconduct, Israel has said officers should not be punished.

Abu Akleh is one of dozens of journalists killed by Israeli forces over the years.

The International Federation of Journalists (IFJ) filed complaints with the International Criminal Court (ICC) on behalf of four Palestinian journalists killed or maimed by Israeli snipers while covering demonstrations in Gaza. All were wearing clearly marked “PRESS” vests when they were shot.

The complaint also details the targeting of the media and the May 2021 bombing of a media building in Gaza City, which housed Al Jazeera, the Associated Press and dozens of others news outlets.

At least 46 journalists have been killed since 2000 and no one has been held to account, the IFJ says, pledging to add Abu Akleh’s murder to the complaint.

Similarly, the Committee to Protect Journalists has cataloged at least 19 journalists who have been killed by Israeli fire, some of them in the Gaza wars, in vehicles marked as press in 2012 and 2014, and two such killings in 2018.

The investigation into Abu Akleh’s death has also been handed over to the ICC prosecutor, though Al Jazeera says the status of the case remains unclear.

Some U.S. lawmakers have called for an investigation with the aid of the FBI and the U.S. State Department, though the Biden administration has not indicated it will undertake such an investigation, choosing instead to say it has confidence Israel can conduct an unbiased investigation into its own forces.

Abu Akleh joined Al Jazeera in 1997 and became a household name in Palestine and in the Middle East, including Israel, covering critical Gaza wars and regional events like the 2006 war in Lebanon.