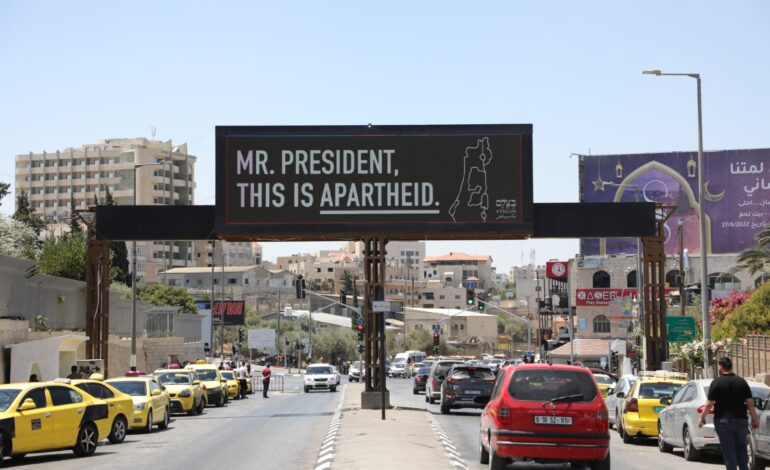 The Israeli human rights group B’Tselem's billboards in Bethlehem, ahead of a visit to the region by President Biden. Photo: B’Tselem

In his Middle East trip, President Biden reiterated his support for for a two-state solution for Israel and Palestine, amid a backdrop of deep skepticism from Palestinians and international human rights groups that the U.S. leader is willing to give more than lip service to Palestinians living under a brutal occupation.

Biden met with Israeli Prime Minister Yair Lapid on Thursday and attended the first virtual meeting of the “I2U2” with Lapid and leaders of India and the United Arab Emirates.

Biden said the U.S. wanted to see a “lasting negotiated peace between the state of Israel and the Palestinian people.”

In preparation for the visit, the Israeli human rights group B’Tselem put up billboards and digital screens in the West Bank cities of Bethlehem and Ramallah on Wednesday that read, “Mr. President, this is apartheid.”

“Without constant backing by the U.S., Israel would not have been able to politically, geographically and demographically re-engineer the area under its control,” B’Tselem has said. “To impose military rule over millions of subjects and deny them rights for 55 years; to annex East Jerusalem to its sovereign territory or to systematically discriminate against its Palestinian citizens.”

But Biden has rejected the criticism wholesale, without addressing the details independent investigations that have led to the conclusion that Israel’s actions in Palestine constitute crimes of apartheid.

When asked if Israelis should be concerned about whether last year’s push to halt funding for Israel’s Iron Dome missile system is a sign of a changing relation between the U.S. and Israel, Biden stressed “there is no possibility, I think, of the Democratic Party or even a significant portion of the Republican Party walking away from Israel,” the Middle East Eye reported. 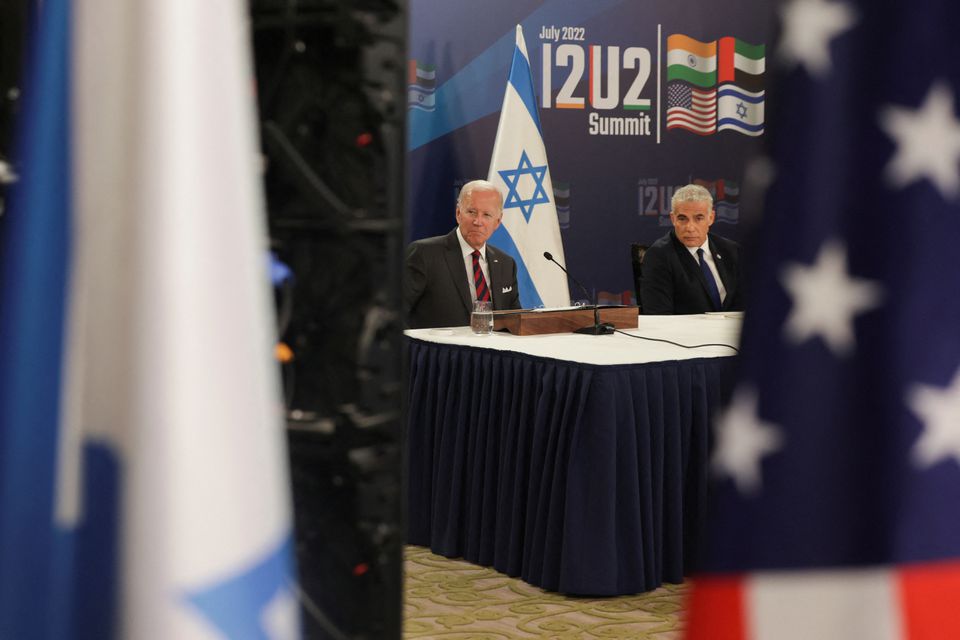 Palestinians say their concerns on issues including self-determination and settlement building in the occupied West Bank have been swept aside by a drive to fix Israel into regional security arrangements with Arab countries.

They also say Biden has failed to live up to pledges on reopening its consulate for Palestinians in Jerusalem, closed by former President Trump in 2019.

The trip comes as American lawmakers continue to ask questions around the killing of Palestinian American journalist Shireen Abu Akleh.

A veteran reporter for Al Jazeera Arabic, Abu Akleh was killed during an Israeli raid on the Palestinian village of Jenin in the occupied West Bank. Multiple eyewitnesses, as well as independent investigations, including the U.N., say she was killed by Israeli forces.

On Wednesday, top U.S. senators, including the pro-Israel lawmaker U.S. Senator Bob Menendez (D-NJ), said in a letter to Biden that the administration had not provided any details of a “thorough… credible investigation” into the killing.

The U.S. State Department has acknowledged that the bullet that killed Abu Akleh came from Israeli occupation forces, but has defended Israel’s against accusations that the killing was deliberate, even though it has not shown any evidence backing that defense.

The New Jersey chapter of the Council on American-Islamic Relations (CAIR-NJ) welcomed Menendez letter to Biden, in which he and U.S. Corey Booker (D-NY) urged Biden to press for accountability for the killing of Abu Akleh during his visit to the Occupied West Bank.

The senators also called for continued U.S. participation in transparent and timely investigations into any remaining or new evidence and asked for a “senior-level classified briefing on the investigation details, including American involvement… and next steps with the IDF and PA regarding accountability for Ms. Abu Akleh’s death.”

The Biden administration has planned to extend the 2016 Memorandum of Understanding (MOU) that established a 10-year, $38 bililon defense package for Israel.

Biden plans to announce a “number of initiatives to support the Palestinian people” on Friday.